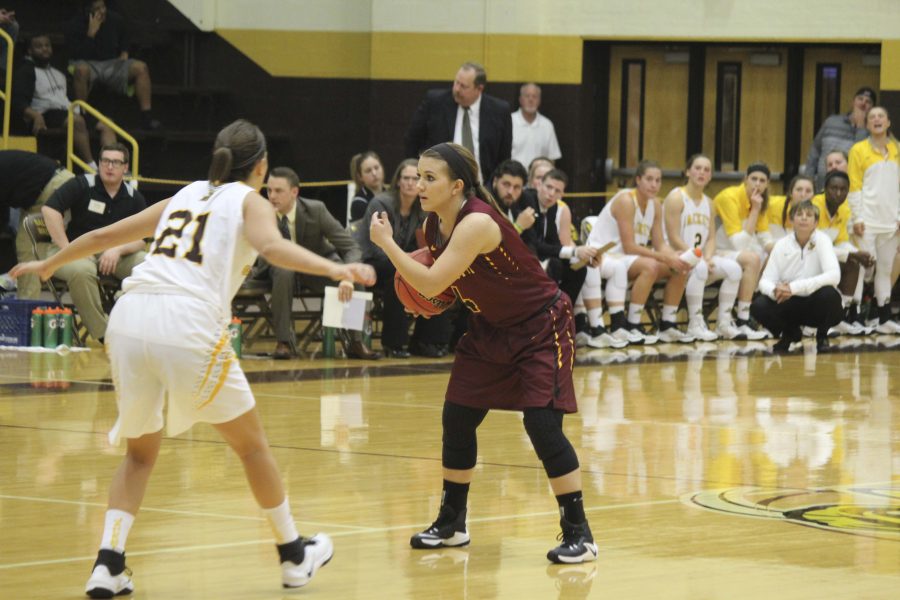 First-year point guard Sarah Thompson looks to make a play in Oberlin’s season opener on Tuesday. The rookie-laden Yeowomen fell to Baldwin Wallace University 70–41, but will be back in action against the Hiram College Terriers in Hiram, Ohio, tomorrow.

Women’s basketball endured a tough loss in its season opener, falling 70–41 to the Baldwin Wallace University Yellow Jackets Tuesday. This disappointing start was somewhat of a letdown after the Yeowomen’s highest preseason ranking ever, sitting at fourth place in the North Coast Athletic Conference coaches’ poll.

The squad was particularly disappointed in the loss given that Oberlin earned a tight win last year over Baldwin Wallace, squeezing by at 63–61 in one of the “closest matches this team has ever played,” according to Head Coach Kerry Jenkins.

“Our intensity just didn’t match theirs,” Jenkins said. “It caught us off guard. This game was a great way for our team to understand that we really have to earn it.”

Oberlin held the lead for the majority of the opening quarter, but the Yellow Jackets managed to take advantage of Oberlin’s turnovers and surge the scoreboard.

“We didn’t play as well as we knew we could have, and Baldwin Wallace capitalized on a lot of our mistakes and turnovers,” said senior forward Eleanor Van Buren. “But this first game is not representative of our team and our season. We have so much potential and we all have really high expectations for our team this year.”

The game showcased solid performances from the sophomores, with center Olivia Canning posting the fourth double-double of her career and guard Alex Stipano netting eight points. The Yeowomen also grabbed 35 rebounds, compared to the Yellow Jackets’ 30.

Underclassmen will play a pivotal role for Oberlin this season, with a first-year class that makes up roughly half of the team’s roster. Sophomore forward Sarah Feinberg said they have already brought about a positive change on the team.

The Yeowomen are led by a trio of junior captains: forward Abby Andrews, forward Anna Moore and guard Tyler Parlor. Jenkins said these veterans have set an example by improving throughout their three years at Oberlin.

“They have all truly embraced the process of improving through this program. … They believe in what we’re doing and what the team is trying to accomplish. They set great examples for their teammates and also have tremendous respect from their teammates,” he said.

Oberlin’s fourth-place ranking in the NCAC preseason coaches’ poll reinforces the team’s goal of competing with the best-ranked teams in the conference, including rivals like the Denison University Big Red and the DePauw University Tigers. After losing to Denison decisively in the opening half of the season last year, Oberlin demonstrated improvement by playing Denison to the buzzer before losing in a 45–44 heartbreaker the week before the NCAC tournament. Oberlin’s losses to DePauw were much more decisive — 63–45 in the first game and 69–40 in the second. But it was the Allegheny College Gators that eventually ended Oberlin’s season in the quarterfinals of the NCAC tournament, defeating Oberlin 58–50. Feinberg said that the team was motivated by last year’s NCAC losses.

“Denison and DePauw are definitely the hardest teams in our conference to beat and we’re all ready to challenge them,” she said.

The Yeowomen will also face tough competition outside of conference competition. Jenkins scheduled 10 non-conference games, including an upcoming trip to Angola, IN, to take on Trine University this Tuesday.

First the Yeowomen will open up conference play against the Hiram College Terriers on the road at 2 p.m. tomorrow. Last year, the Yeowomen and Terriers split both games. On Feb. 13, Oberlin fell to Hiram 53–50 after being outscored 18–9 in the fourth quarter. Jenkins said that the Yeowomen must be particularly wary of the Terriers and other rivals this season.

“Everyone is anticipating our successes,” Jenkins said. “We’re no longer the hunters. This year, we’re the hunted.”