Yeomen Look to Rebound Against Youngstown 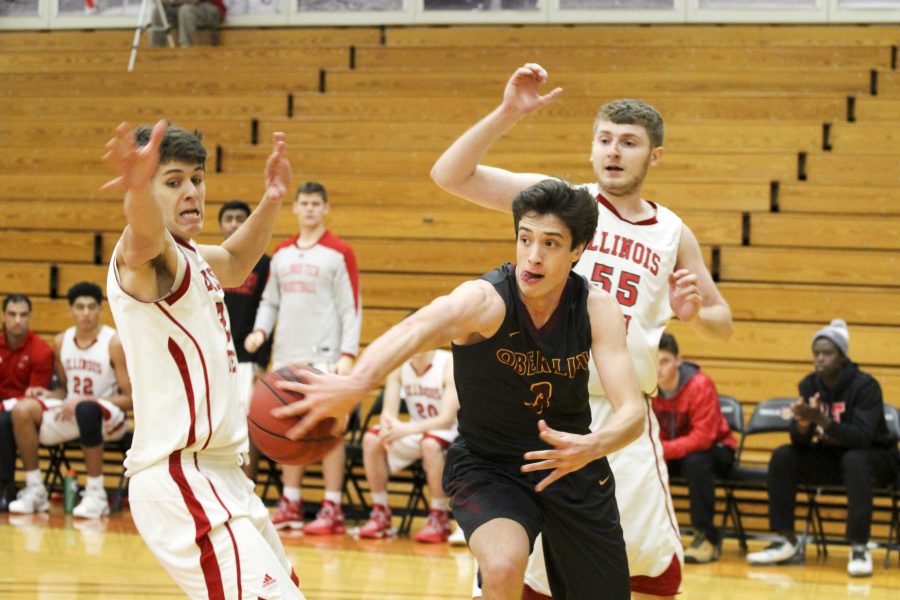 Sophomore Eli Silverman-Lloyd attempts to save the ball from going out of bounds against Illinois Institute of Technology during the Thanksgiving Classic, hosted by the Yeomen.

The Yeomen’s early season struggles continued with an 87–73 loss to the Muskingum University Fighting Muskies Wednesday, dropping the team’s record to 1–4 overall and 0­–1 in the North Coast Athletic Conference. With less than one week remaining before the NCAC season officially begins, the Yeomen must find their stride in if they want to make a postseason push.

“I think the biggest problem with our team so far is the inconsistency,” sophomore forward Eric Holt said. “When we play our game we will go on runs against the other team. Whenever we don’t play our style we start giving up open shots and offensive rebounds, which is not a winning recipe.”

Against the Muskies, the Yeomen got off to a slow start, shooting just 26.4 percent from the field in the first half. Trailing 37–24 at halftime, Oberlin was forced to make a few adjustments and in the final 20 minutes of play, the Yeomen found a rhythm offensively. The team made six three pointers in the second half and was only outscored by the Muskies 50–49.

With the win, Muskingum remained undefeated, improving to 4–0 on the season. The Muskies’ offense was dominant throughout the entire game making 55.4 percent of its shots, while Oberlin shot just 39.7 percent. Senior Nate Cohen led the Yeomen’s offense, totaling 19 points, three rebounds and two assists.

Prior to the Muskingum game, the Yeomen hosted the Thanksgiving Classic. Oberlin faced Kalamazoo last Friday, and although three different Yeomen scored in the double digits, they could not come back from their early deficit and lost 74–70. Two days later, Oberlin then fell to Illinois Institute of Technology 95–82.

Oberlin’s lone conference loss came in the season opener, falling to the College of Wooster Fighting Scots 105–64 Nov. 16. The College of Wooster was ranked seventh in the nation at the time, which proved to be a challenging task for the Yeomen. The game gave the team a chance to give younger players, such as Holt, a larger role. He scored a career-high 14 points.

In addition to the prominent sophomore class, several of the seven first-years on the Yeomen roster have received significant playing time.

“The younger guys on the team have performed well,” senior guard Jack Poyle said. “There is a big change in the level of competition between high school and college and I think the guys have handled it very well. It has been great to see.”

Now, Oberlin is preparing for its Saturday matchup against the Youngstown State University Penguins, a Division I program.

While the matchup will certainly be a difficult one, the Yeomen are excited to take on the challenge.

“For every kid who grew up wanting to play competitive basketball, attending and competing at a Division I school is the ideal goal,” first-year guard Joshua Friedkin said. “The general mood within our locker room is that we feel like we can battle with and beat any team out there. There is no question that we feel confident we can go into Youngstown and give them a battle.”

The Yeomen will need such confidence as the season continues in order to bounce back from losing four of their first five games. After finishing last year 12–14 overall and 7–11 in the NCAC and graduating their second-leading scorer, center Randy Ollie, Oberlin is still searching for its identity on the hardwood.

“I definitely think we’re still trying to figure ourselves out,” Head Coach Isaiah Cavaco said. “We’ve changed how we play, we’ve added some freshmen and sophomores to our rotation, so I think we’re all kind of feeling out where we belong within what we do.”

Cavaco, who is entering his 11th season as Oberlin’s head coach, has mentored multiple All-NCAC players, five 1,000-point career scorers, and led the Yeomen into the conference tournament for the past four seasons. His accomplishments are on a level that Oberlin has not seen since the 1990s.

“I’ve seen us play really well in stretches so I know we’re on the right track,” Cavaco said. “It’s just a matter of eliminating those major droughts that we’re having as well.”