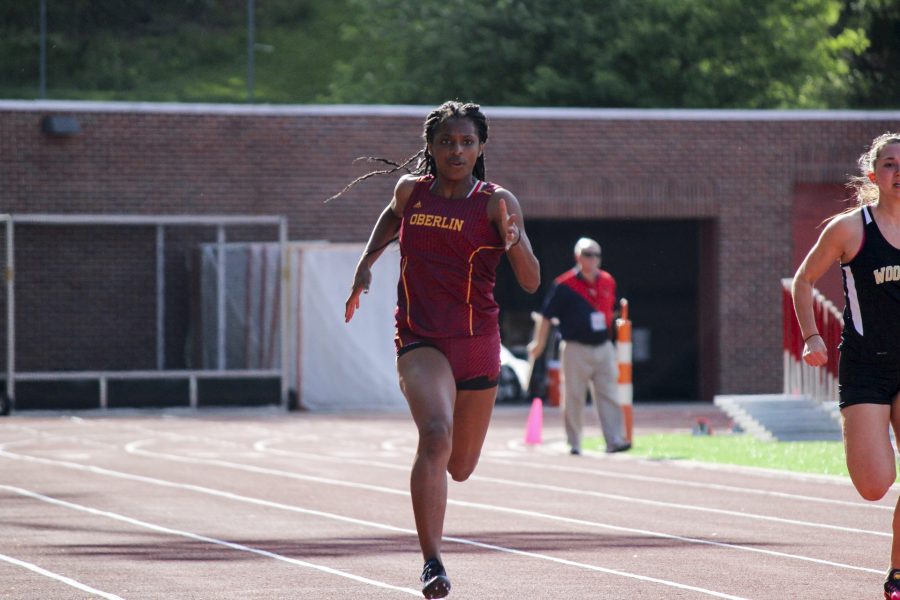 Four athletes were recognized by the North Coast Athletic Conference as Athletes of the Week and one sprinter broke a program record as both track and field teams dominated at their season-opener at Case Western Reserve University.

“I can’t remember a time where four of us have done this at the same time, which is just a testament to how hard we’ve worked and how good we feel right now,” said junior thrower Monique Newton.

In an unprecedented sweep, the Yeowomen took NCAC player of the week honors in each track and field category. Newton was named field Athlete of the Week while sophomore distance runner Linnea Halsten earned the nod for her performance in distance.

Sophomore Imani Cook-Gist was honored as sprinter of the week and earned a program record in the 60-meter dash. Cook-Gist finished with a 7.89 mark, breaking the record for the second time in just two years as a Yeowoman. Head Track and Field Coach Ray Appenheimer said he was thrilled with the performances of Cook-Gist and her teammates, and hopes that they indicate a promising season ahead.

“It was great — really, obviously [there were some] awesome performances,” said Appenheimer. “To start the season out like that is impressive and I hope it speaks well to what’s coming next.”

Halsten, returning to the track from a record-breaking cross country season in which she placed 53rd in the NCAA cross country championships, finished the women’s 3k in first place with a time of 10:25.22.

On the men’s side, junior James Tanford was also awarded NCAC field athlete of the week. Tanford set a personal best in the triple jump with a mark of 41-02.50 and finished third in the long jump with a distance of 20.05.25. He said that after a long offseason, he and his teammates were eager to compete.

“We’ve all been training since July, and we were really looking to get back out there,” said Tanford. “It’s hard to run with no goal in sight … so we’ve had this marked on our calendars for long time.”

Appenheimer said he was proud not only of Tanford’s performance at the meet, but also in the example he has set as a captain.

“James’ enthusiasm and leadership have been great throughout the season,” Appenheimer said. “It’s wonderful to see the payoff for that now.”

Both teams’ first-years also made their marks in their debut college meet. First-year Dylan Rogers had a stellar performance in the 4×400 race, making up a nearly 10 meter deficit in the home stretch of his leg and helping the Yeomen to achieve a time 10 seconds faster than last year’s best mark. The relay team of Rogers, Tanford and sophomores Jabari Clemons and John Olsen clocked in at 2:32.23.

Tanford said he was excited about the promise the rookies showed.

“I was really impressed by the freshmen, because I know we’ve been practicing all fall, but this is our first look at them in a meet, and they all did really, really well — which is exciting because we’re only going to get better as the season goes on,” Tanford said. “Overall, I was really impressed with the energy and there were a lot of really good performances, which is encouraging.”

Track and field will see action again today at the Golden Flash Gala at Kent State University in Kent, OH, competing against Division I, II and III teams. Tanford said he looks forward to being underestimated by the big-school competitors.

“In one aspect it’s almost a little intimidating … but it’s also really fun. Nobody really expects anything of us. If you’re Kent state, you’re going, ‘Who is Oberlin College — why are we running against them?’ We always go in and surprise a couple of people,” he said.

Two years ago, when the squad traveled to Kent, Ohio for the same meet, Monique Newton, then in her rookie season, dominated the shot-put event. She crushed opponents from big-name schools like Louisville, Kent State and several schools from the Big East Conference.

“Yeah, it was a pretty good meet,” Newton said, laughing.

Appenheimer said he hopes Newton and her teammates perform well and go into the winter break on a positive note.

“This is their last competition before Winter Term, and given what we saw last Saturday I think we’ll see even better things this time around,” he said.