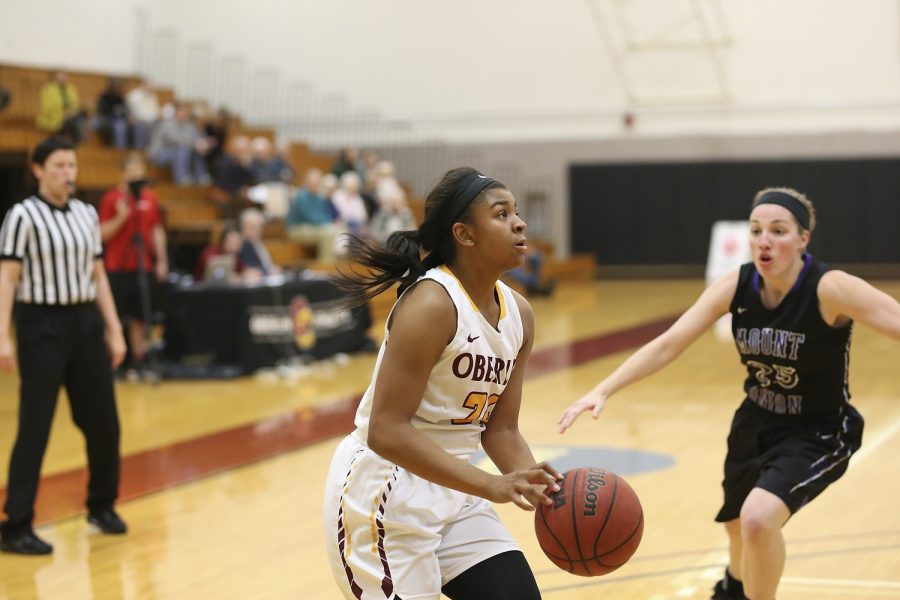 Junior Tyler Parlor eyes her shot during a game against the University of Mount Union Nov. 28. After defeating Denison University 51–46 Wednesday, the Yeowomen are currently 3–4 overall and 3–0 in the NCAC.

Losing four of its first five games hasn’t stopped the women’s basketball team from dominating North Coast Athletic Conference play. With a 51–46 win against the Denison University Big Red Wednesday, Oberlin improved to 3–4 overall, and a perfect 3–0 in the NCAC.

The Yeowomen, who currently sit atop the NCAC standings in a tie with DePauw University, have kept their game style simple.

“We’re not a complicated team at all,” Head Coach Kerry Jenkins said. “We execute, we play hard, we defend, we take good shots and that’s it. We’re just trying to be us.”

Against the Big Red, the Yeowomen struggled find their offensive rhythm early on, trailing 24–16 at halftime. After a woeful second quarter in which Oberlin scored just two points, Jenkins fired up his squad to lead a strong finish. In the third quarter, the Yeowomen went on a 14–5 run to take 34-33 lead.

In the fourth quarter, Oberlin took control by using its height advantage in the paint. With the game tied 41–41, a bucket from junior Anna Moore put the Yeowomen in front. After a layup from junior Abby Andrews was equalized with a Denison basket, sophomore Olivia Canning hit a key jump shot with 1:13 left in play to put the Yeowomen ahead 47–43. They maintained that lead for the rest of the game.

The team’s previous conference wins came in a 56–52 defeat over the Hiram College Terriers on Nov. 19. The Yeowomen also logged a 68–47 win against the College of Wooster Fighting Scots on Nov. 30.

Prior to the crucial conference matchup versus Wooster, junior guard Tyler Parlor was benched with an injury. The Yeowomen looked to senior guard Bri Santiago to fill Parlor’s role. Santiago stepped up to the challenge in her third career start, posting nine points, nine rebounds and a career-high five assists.

“With Tyler Parlor being out, I knew that I had to step up and fill a big role, especially in a conference game against Wooster,” Santiago said. “This was a win we needed to solidify and take. Staying calm and executing exactly what my coach wanted out on the floor translated to open shots and great defense for us.”

First-year guard Sarah Thompson was also vital in the win against the Fighting Scots. Finishing with nine points, she was perfect from the three-point line, connecting on each of her three shots. The Manchester, MI native said she believed the team was victorious due to a collective effort.

“As a team, what went right for us was that everyone contributed,” Thompson said. “There were multiple people with nine and eight points, which made it hard for Wooster to guard. We also dominated in the post and our shots were going in.”

The Yeowomen will attempt to maintain NCAC dominance as they face the Ohio Wesleyan Battling Bishops tomorrow at 1 p.m. This will be the first taste of conference action for the Bishops, who are 2–4 overall on the season.

Against the Bishops and for the rest of the season, Jenkins said he isn’t looking to change his game plan. After earning the NCAC Coach of the Year Award last year, he has become the most successful coach in Oberlin women’s basketball history, recording 68 total victories.

Last year, Oberlin swept Ohio Wesleyan. Tomorrow, the team hopes to exploit the Bishops’ defensive weaknesses, as they have the third-worst defense in the conference, allowing an average of 70 points per game.