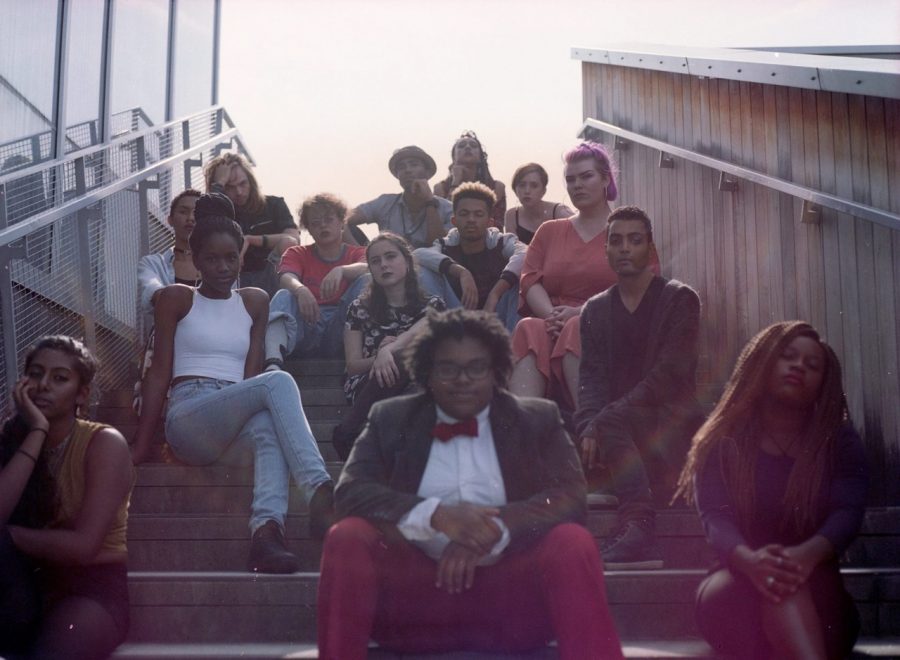 The full OSLAM team poses outside the Kohl building. Seven of its members will compete at 8 p.m. in the OSlam Grand Poetry Slam at the Cat in the Cream to qualify for the 2017 CUPSI team.

OSLAM will hold its annual Grand Slam in the Cat in the Cream Saturday at 8 p.m., showcasing an art form steeped in resistance and empowerment to conclude what has been an emotionally and politically fraught semester for many. Poetry slams are the competitive art of performed poetry, putting dual focus on both written and performed expression. Seven poets of different experience levels and undeniable skill will read and perform their work in front of a live audience, competing for space on the five-person College Union Poetry Slam Invitational team to represent Oberlin at the national college slam.

Performance provides a different and more immediate level of connection between poet and audience, stripping away traditional degrees of separation that distance the voice from the speaker.

“I’d say the biggest difference would definitely be the explosiveness, because you’re not going to get the same energy … within a literary context [as] spoken word or slam poetry, because there’s a lot more energy within the room, and you also get the inflections and more meaning from the writer through performance,” said College first-year Jalen Woods who, like many in the slam community, came to the form through exploration of those literary traditions.

“I think it’s more about the performance of your piece than it is the piece itself,” College sophomore Hanne Williams-Baron said. “It’s important to bring a lot of energy and a lot of passion to what you’re performing, even if it’s a softer piece. You have to really become it, because if it’s on the page, then anyone can read it, but in competition if you want to progress to the next round, you have to bring it.”

Although OSLAM is an intra-competitive team, the relationships and support the team fosters for its members is among the primary reasons these poets engage with their art form in the way that they do.

“For me, slam is more about the community of people that do slam than necessarily the art form itself, just because I think slam poets, because it’s a political art form there are people who are — at least in Oberlin and the community that I’m involved with — really, really aware of themselves and the time that we’re living in,” Williams-Baron said.

Poetry can be a deeply personal art form, and the performance aspect of spoken poetry breaches the divide between public and private in different ways, although the consensus seems to be that writing is personal and performed pieces should be chosen based on what a writer feels comfortable sharing in a given space.

“I think I used to worry too much about writing for an audience,” College senior Christopher Puglisi said. “But now I completely refuse to alter my voice for slams. Spoken word is a space of personal truth and testimony, and I believe it would be detrimental to change that to fit a certain audience,”

“I only write for myself, there isn’t a distinction between what I write for and outside of slams,” College senior Annika Hansteen Izora, co-president of OSLAM, wrote to the Review. “I feel like if I write specifically for a slam, the writing becomes untrue. Writing is a healing practice for myself, and every poem I write always needs to engage in that healing practice. I feel like when I am being heard, I am always being judged, no matter who the audience is, so those two spheres always merge for me.”

Hansteen Izora also described the spoken word art form, often mistakenly conflated with the broader category of performance poetry, as being deeply rooted in Black culture. A resistant political art by definition, it imports aspects of other Black arts like hip-hop.

“Spoken word is a poetic art form that only those that identify as a part of the Africana diaspora can engage in, as spoken word holds African roots, and spoken word’s engagement utilizes various forms of Black performance theory,” she wrote.

“Like many African diasporic cultural traditions, spoken word emphasizes the power of the word with rhythm,” Puglisi wrote. “For me, spoken word is transformative and is always engaged in critiquing and disrupting systems of power.”

This is not to say that non- African Americans and non-POC shouldn’t participate in or attend slams, which can showcase any performed poem. While slams are, as Puglisi wrote, “inherently political spaces that invite the voices and narratives of marginalized identities,” performed poetry speaks to innumerable issues not exclusive to the African diaspora, such as LGBTQ and gender equality and the stigmas surrounding poverty, documentation status, mental illness, body shape and disability, to name a few.

“I’m white, so spoken word is not available to me, but I do performance poetry, regular poetry that I read out loud, and I do them at slams,” Williams-Baron said. “I think it’s really up to the poet to know what room they’re in and bring different work depending on that, so I think about disruption a lot. … If I’m reading a poem in a room of thin people, I could read a poem about me being fat, and that could be disruptive [and] feel like a good use of my voice.”