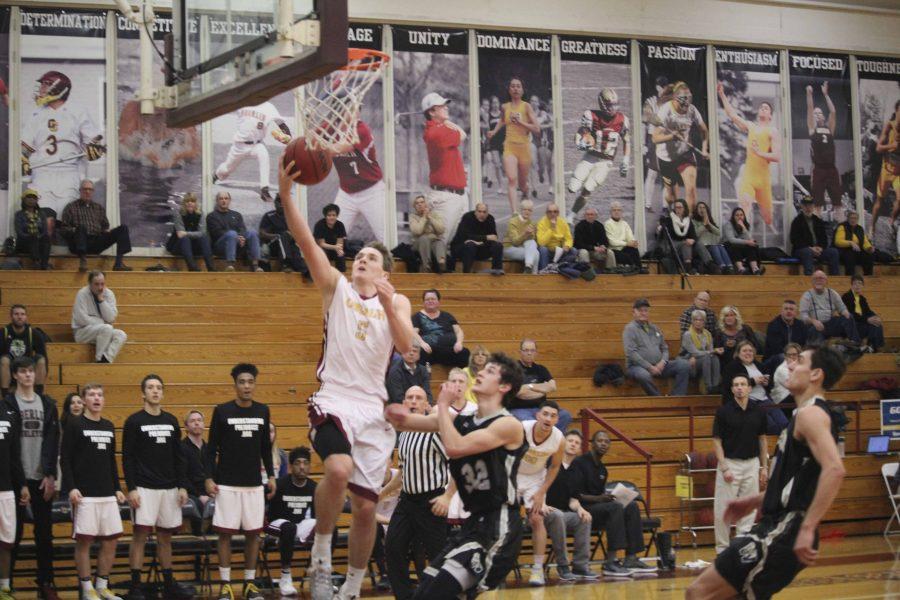 Senior Jack Poyle leaps for a layup in Oberlin’s 69–68 loss against The College of Wooster Wednesday night.

Guided by their plethora of young talent, the men’s basketball team has continued to improve throughout the season. The Yeomen’s development since their first game was put on display when they dropped a close matchup against The College of Wooster Fighting Scots Wednesday 69–68. Oberlin drops to 1–19 overall and 0–13 in NCAC play.

“We’re getting better, despite what our record may say,” said sophomore guard Nile Godfrey.

After falling to the Fighting Scots 104–65 Nov. 16 in their season opener, the Yeomen made strides against one of the most successful Division III teams of all time. Facing the largest deficit of the game at nine points, first-year guard Joshua Friedkin sunk a three-pointer to draw the Yeomen within two possessions, 21–15 with 7 minutes, 0.06 seconds to play in the first half. This trend of resilience has become a commonality this season for the Yeomen.

“The biggest takeaway of the season so far is to keep fighting,” said sophomore forward Eric Holt.

From the perimeter, the Yeomen were locked in, knocking down 7–17 shots for 41.2 percent. Riding their offense and opportunistic defense, the Yeomen trailed by one point, entering halftime 30–29.

Momentum swung back and forth between both teams during the second half. With 18:33 left in the game, first-year forward Andre Campbell gave the Yeomen the lead with a layup, putting Oberlin ahead 31–30. But with the game on the line, the Fighting Scots charged ahead in the final seconds when Milt Davis scored from underneath the hoop with 11 seconds to play to seal the 69–68 victory for The College of Wooster.

The Yeomen were above their season average from the field, connecting on 25–54 shots for 46.3 percent. Defensively, Oberlin maintained its footing to hold the Fighting Scots to 23.1 percent from the outside on 3–13 shooting.

With the game within inches, Head Coach Isaiah Cavaco said that the Yeomen are just a few plays away from being where they want to be.

“We needed to be more in the moment during the game,” Cavaco said. “We need to be present in what we’re doing instead of getting caught up in the mistakes we’re making.”

Although four Yeomen scored in the double digits against the Hiram College Terriers Monday, the squad fell victim to yet another crunch-time loss. With the 79–70 loss to the Terriers, the losing streak continued. Godfrey said the loss was a result of errors in execution.

“Our effort was there, we just didn’t make all of the plays that we needed to in order to win the game,” said Godfrey.

Oberlin seized the lead early, but by halftime the Terriers had taken control. Despite the Terriers’ dominance, Campbell had a career day with 19 points. Sophomore guards Eli Silverman-Lloyd and Holt also had strong showings, recording 14 and 13 points respectively.

Now in his 11th season with the Yeomen, Head Coach Isaiah Cavaco said he is impressed with the development of the underclassmen talent.

“Watching the fast growth of the young players has been a highlight of the season,” Cavaco said. “It’s very obvious that they’re all improving at a high rate.”

Still, the Yeomen’s record is not necessarily reflective of their play. In a season when 13 of 20 games have been decided by 10 points or less, Oberlin’s tight game with Hiram is not an outlier this season.

“There’s no doubt that we’re a tough group,” said Godfrey. “But the score doesn’t always show that. Sometimes you need to look beyond the score.”

With five games remaining on the schedule, the Yeomen continue to hold onto an outside chance of making the conference tournament. Tomorrow afternoon, Oberlin will try to snap its 18-game losing streak tomorrow when it battles Wittenberg University at 1 p.m. in Springfield, Ohio.

“We need to start winning more games, but we’re getting close,” said Cavaco. “I want our players to believe in the work they’re putting in.”