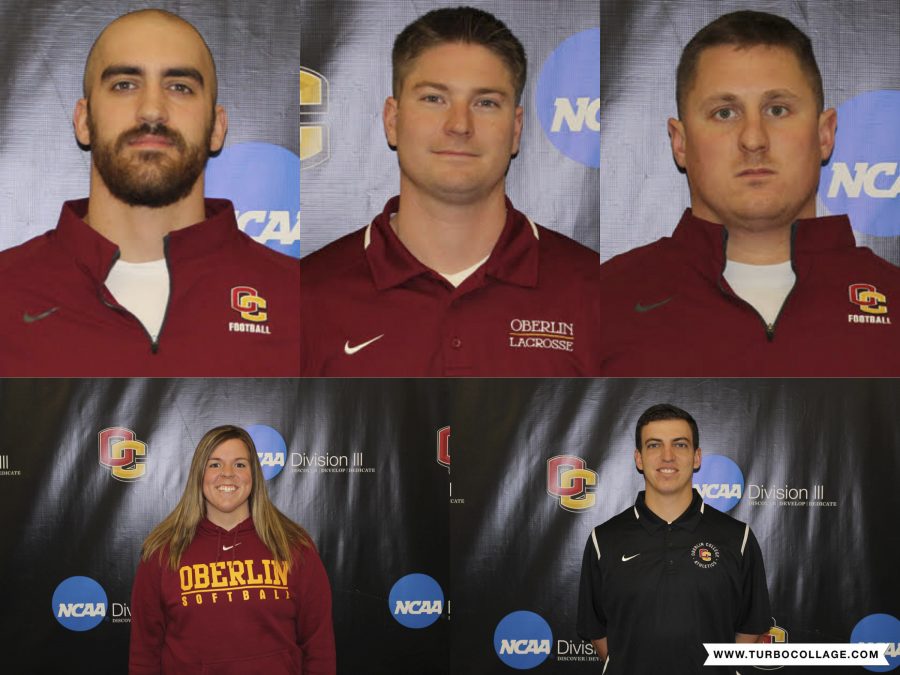 The Athletics Department added five new assistant coaches this January, each of whom offers their own unique blend of collegiate coaching and playing experience to the softball, baseball, football and men’s lacrosse teams.

While assistant coach Brandon Jossey has only been on the Yeomen baseball coaching staff for a matter of weeks, he is no stranger to Oberlin’s fields and facilities. While recruiting for Seton Hill University, Jossey visited Oberlin to scout players from Head Baseball Coach Adrian Abrahamowicz’s summer team. Jossey was a key asset in recruitment and coached hitting and outfield play at Seton Hill, so when a spot opened up in the Yeomen coaching staff, Abrahamowicz immediately reached out to Jossey. Jossey said he is pleased with the transition and is already impressed by the quality of the Yeomen baseball players.

“The student-athletes here are just awesome,” Jossey said. “They care about where they’re going in life, and that translates to baseball. They really want to learn, which makes me want to do a really good job of coaching and teaching, and also learning myself, so I can pass it on to them.”

On Oberlin’s other diamond, Head Softball Coach Sara Schoenhoft is excited to welcome the new pitching coach, Olivia Wulfhoop. Schoenhoft said that the hire was a long time coming and hired Wulfhoop in the midst of an offseason in which improving pitching was a major focus. Last season, Oberlin notched a North Coast Athletic Conference worst 7.46 earned run average, so Schoenhoft said she hopes Coach Wulfhoop’s experience as both a coach and a player at the Division I level will benefit the Yeowomen pitchers.

“The big thing is, we really want someone to come in and work with our pitchers,” Scheonhoff said. “I think that our offense is strong. We’re going to score runs. With Olivia coming on board, that will give our staff the shot in the arm they need.”

Prior to coaching at Georgia Court, he spent five seasons at Stockton University. During Chisholm’s tenure as defensive coordinator, the team posted its lowest goals against average in program history with 7.74 and forced 9.74 turnovers per game. Chisholm said he has already noticed the focus and willingness to learn of his new roster and is excited to coach Division III lacrosse once more.

“I joined a Division II program, and I wanted to get back into Division III,” Chisholm said. “I knew it was a program that, if I got my hands on it, I could really help progress them to the next level.”

The football team added coaches on both sides of the ball in an effort to bounce back after an 0–10 season with an ailing defense that let up 39.6 points and 463.9 yards per game.

Garret Mack will join the Yeomen as the linebackers coach. Mack is a homegrown talent taking the leap to the collegiate level after serving as the defensive coordinator of the Oberlin High School football program. Mack coached a school record nine all-district players and six all-state selections in just one season at the program.

New Offensive Line Coach Ben Gysin previously played at and coached for Mercyhurst University. As a player, he recorded two All-PSAC West honors as well as one All-American selection. As a coach, he recruited from Ohio, Michigan and West Virginia and taught the tackles and tight-ends gap, zone, and man blocking schemes.

“What I came from was more of a gritty, smash-mouth sort of stuff that I ran,” Gysin said. “So I’ll try to add that gritty sort of mentality to the team.”

“I felt like this was a welcoming staff,” said Gysin. “I felt like there were the tools here to become a successful program. Getting the chance to meet all of the coaches gave me the sense that this was kind of like a home feel. … Coach Anderson has a wealth of knowledge on how things are done from top to bottom.”