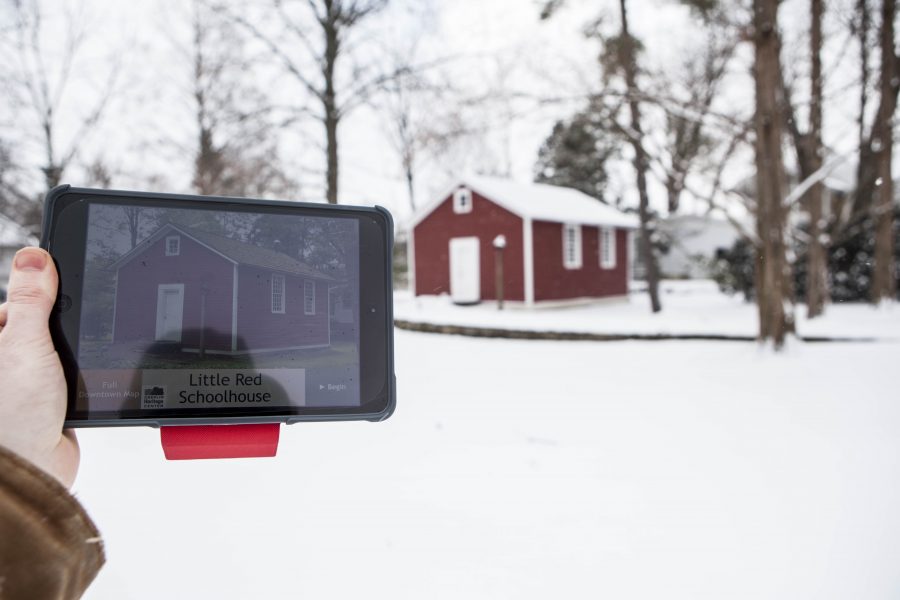 Students and community members looking to celebrate Black History Month should consider the Oberlin Heritage Center, which is offering a free, digitized version of its walking tour, Freedom’s Friends: Underground Railroad and Abolitionist History Walk, throughout the month of February.

Visitors to the Monroe House, located on West Vine Street, can borrow tablets preloaded with the tour for the day. These tablets allow users to explore Oberlin’s ties to the Underground Railroad and slaves’ journeys to freedom.

Visitors may choose to participate by traveling to historically significant local landmarks on foot or virtually, from “the comfort of their own home,” according to Amanda Manahan, Oberlin Heritage Center Museum education and tour coordinator.

The goal of the tour, which is currently formatted as an interactive Keynote presentation, is to shed light on the individuals who contributed to Oberlin’s legacy as an epicenter of social progress and racial equality.

“I think it’s important for people to realize all of the individuals involved,” said Oberlin Heritage Center executive director Liz Schultz. “A lot of people conceptualize the Underground Railroad to be a physical thing, but in reality it was more of a personal thing — it was people helping people. … That’s what I see in this tour.”

Individuals recognized in the tablet tour include James and Mary Fairchild, who helped shelter fugitive slave John Price in their home during the famous Oberlin-Wellington Rescue of 1858. Famed African-American and Native sculptor Edmonia Lewis, whose work is currently on display at the Allen Memorial Art Museum in an installation curated by artist Fred Wilson, also makes an appearance on the digital tour.

Each profile and story is accompanied with pictures and text assembled by Schultz and AmeriCorps workers. These stories and individuals, tied to certain locations in and around the town of Oberlin, paint a picture of

what it was like to be Black during a particularly volatile time in the United States.

The eight tablets, purchased with a grant from the Institute of Museum and Library Services, allow for increased educational flexibility of time learning style and content.

“These tours are not static; they’re ever-changing,” Manahan said. “We wanted to create a format that we could update in case we learn more information, or something changes in town.”

The OHC is increasingly interested in utilizing technology for educational purposes. Rather than replacing guided tours, tablets will supplement these learning experiences by incorporating sound. Moreover, the center is on the cusp of putting out Chinese and Spanish versions of the tour.

The tour itself is crisp, informative and easy to navigate — a must for technology that will be used by visitors of all ages. The user begins the tour by choosing one of four areas of Oberlin they would like to focus on: outer Oberlin, South Campus, downtown and around Tappan Square. These regions contain various locations of interest, ranging in time from the town’s earliest days as an abolitionist stronghold — First Church and the Little Red Schoolhouse — to newer locations that represent civil rights victories, such as Martin Luther King Jr. Park.

Visitors who prefer to interact with the tablet tour in a less active manner can do so, as the tour does not require the user to physically be at the location to read about it. Rather, they can pick and choose what locations and stories they want to learn about according to their personal preferences.

“What’s nice about these [tablets] is that you could either walk with them, or you could even just rent one, take it home and do a tour of Oberlin from your home,” Manahan said.

One particular success of the tablet tour is its “scenario questions,” which pose open-ended questions to the reader of the tour, with “no right or wrong answers.” The questions ask participants to deal with historical dilemmas. One poses the scenario of a child getting deathly ill on a frantic escape to the North, leaving participants to contemplate the decision of either risking the child’s life to continue the journey or attempting to save the child by leaving them in the care of an unfamiliar family. The questions are not only historical. One asks, “You are talking with a group of people and one of your friends makes a racist remark. How do you react?”

The questions are a clear triumph of the tablet tour. Even though the format can be “less engaging” than guided tours, according to Schultz, this part of the tour directly addresses the person holding the tablet and encourages them to actively engage with the context of the history they’re experiencing. The history becomes a conversation, rather than a one-sided lecture.

“Northern Ohio, this area … was an incredibly important location for these activities to be occurring,” Manahan said

Students and community members interested in renting a tablet should do so sooner rather than later — while this tablet tour is available year-round for rental, it is only free for the month of February in honor of Black History Month.

The tablet is available Tuesdays through Saturdays, 10 a.m. to 3 p.m., in the Monroe House, a building owned by the Oberlin Heritage Center. Although it is free, a credit card is required for liability purposes. Users may also be required to sign a rental agreement.