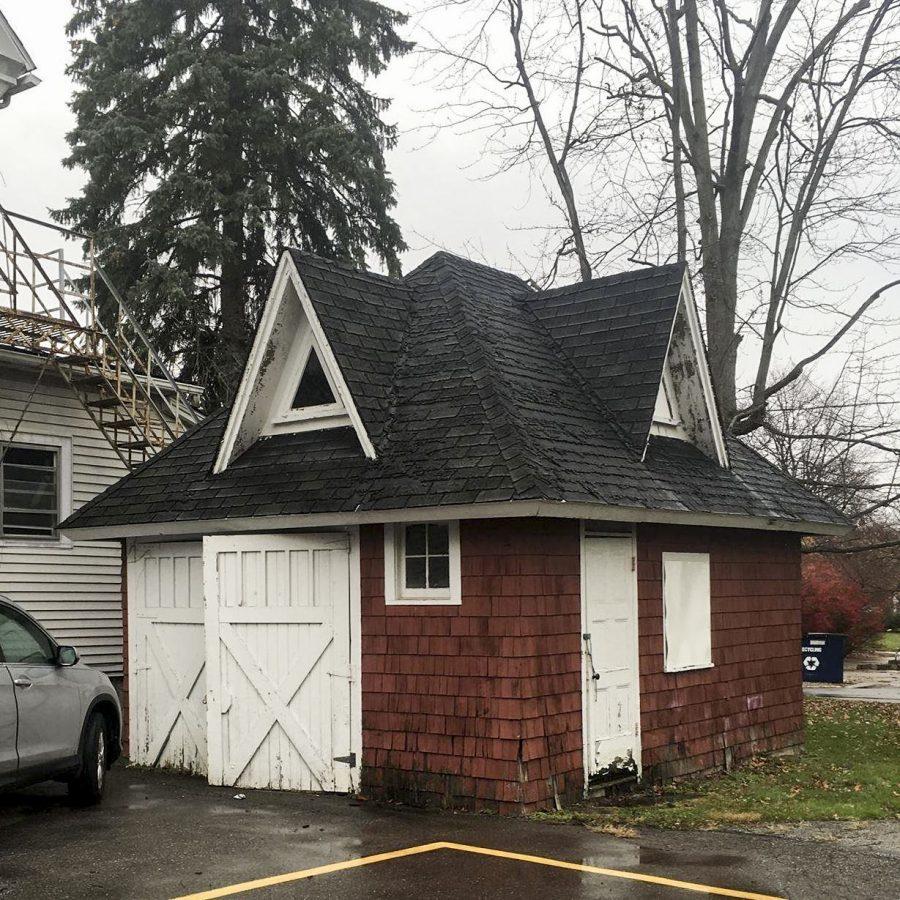 Live at the Den, a new, biweekly variety show created by College sophomores Keifer Ludwig and Jon Krakaur, opens tonight in the shed behind 137 Elm Street.

In a small, unassuming hayloft just off Elm Street, audience members for Live at the Den, premiering today at 7:30 p.m., will be the first to experience a unique new variety show on campus. The project of College sophomores Jon Krakaur and Keifer Ludwig, Live at the Den combines the music, poetry and comedy performances of a typical variety show with a rather unique twist: audience members won’t be able to see the performers.

Ludwig was inspired when he attended a performance in the space last semester by Primitive Streak, an improv comedy troupe.

“I stole [the idea],” he said, laughing. “Primitive Streak actually had a show up there and they did something called a ‘bat,’ which is an improv form. … It’s only sound so you don’t get to see any of the improvisers.”

What makes the den an ideal space for the format is its second level — accessed by ladder — where the performances will take place, out of view of the audience below.

“You can’t see [the second floor] at all from the first floor, but you can hear very well [because] the wood resonates really well,” Krakaur said, adding that anyone speaking at a normal volume from the top floor can be heard clearly below.

This configuration allowed Primitive Streak to use the “bat” form, a variation on a common improv comedy game, and its performance inspired Ludwig to take the style beyond its typical context. “I thought, ‘This is totally under-utilized space. Imagine all of the other things people could be doing here,’” he said.

Krakaur and Ludwig had been working on a variety of projects together at the time, and Ludwig suggested the idea of utilizing the space for a new one.

“I thought it was cool and I didn’t know what the space looked like at all, but [Ludwig] gave me a pretty good idea of what it would be,” Krakaur said. Not long after that conversation, the two had a concept for Live at the Den.

In the interview, Krakaur and Ludwig were surprisingly casual about the show’s inception — as if without much in-depth planning, the two had an idea they were ready to commit to. It’s an air that speaks to their familiar creative relationship, from which Live at the Den is hardly the first project to arise.

“We were friends at the beginning of our [first] year. But then we both auditioned for and got into the same improv comedy troupe, [Kid Business]” Krakaur said. “From there we just both expanded together into various forms of comedy.”

The comedic chemistry that the duo has developed over their time working together was clear as they joked with one another between questions. “You didn’t like me at first,” Ludwig pointed out.

“No. I thought you were trying to be funny too much,” Krakaur replied. He and Ludwig chuckled.

“I remember talking to Jon and realizing two months [into Kid Business] that we hadn’t done a single scene together, and I [said] ‘Hey we’re friends. We should do a scene together,’” Ludwig said. “Then we did it and it was awesome, just getting to do comedy with [Krakaur].”

“Then [Krakaur] came up to me about a podcast and we did a podcast together, and then we created two-man musicals during the spring. So we’ve had a bunch of different ideas and just rolled with them,” Ludwig added.

“I’d dropped out of Piscapo’s Arm, the sketch comedy group, because I wanted to start a new one with Kiefer,” Wise said. “I’m always looking to write, so when he said he was doing this project, I was immediately interested.”

Wise, Ludwig and first-year Mimi Silverstein will be responsible for the show’s story, a radio-play-style sketch that will close each performance.

Hewing true to the radio-play style, all the sound effects in the show’s stories will be created with found objects, just as in other classic radio shows. “It’s all going to be real sounds. None of it’s going to be played from a speaker … which is one of the things I’m really excited about,” Wise said.

“My big inspiration … [is] this old radio show called X Minus One. It was the premier sci-fi [radio] show,” Wise said. “The benefit of a radio play is [that] you can go anywhere. It doesn’t have to show you anything [and] I can just describe the scene to you. But it’s different than reading it on the page, because it’s more engaging, … and it’s happening right above you.”

For Ludwig and Krakaur, the story section of the show — with a continuing narrative set in the same world — presents an opportunity to keep fans engaged from show to show.

In addition to the story portion, each edition of the show will feature a diverse lineup of performers from various disciplines. Ultus, a jazz-fusion band composed of Conservatory sophomore Aliya Ultan and Conservatory junior Carson Fratus; the Obertones; and College fourth-year Maya Elany will all be performing on Friday.

Aside from being “a space that’s probably pretty tight, where you go … and listen to a bunch of your peers who you wouldn’t really have a chance to see otherwise all get together, … I think neither of us really know what [Live at the Den] is going to be yet,” Ludwig said, but he and Krakaur seem unfazed by the uncertainty in their new endeavor.

“We don’t know if anyone is going to like it [or] if anyone will show up, but I think it will be good,” Krakaur said.

In the long term, however, the duo clearly envisions Live at the Den attaining popularity. “I just want it to be a big community thing where anyone who wants a space to perform [or] anyone who feels like they have anything particularly powerful to say gets to do that. I have a vision for it to be a big thing on campus that people to tune into,” Ludwig said.

While gaining prominence on campus is tough for any new performance venture, Live at the Den seems poised to do so: Demand will likely be high for the 25 seats at a given show. However, people unable to make a live show will still be able to listen in, as shows will be live streamed online and recordings will be distributed via SoundCloud.

Live at the Den premieres tonight at 7:30 p.m. behind 137 Elm Street. The first 15 people to arrive at the show will get in for free; advance tickets can be purchased from the show’s Facebook page for $5.