In The Locker Room with Mel Xu and Katie Rigdon 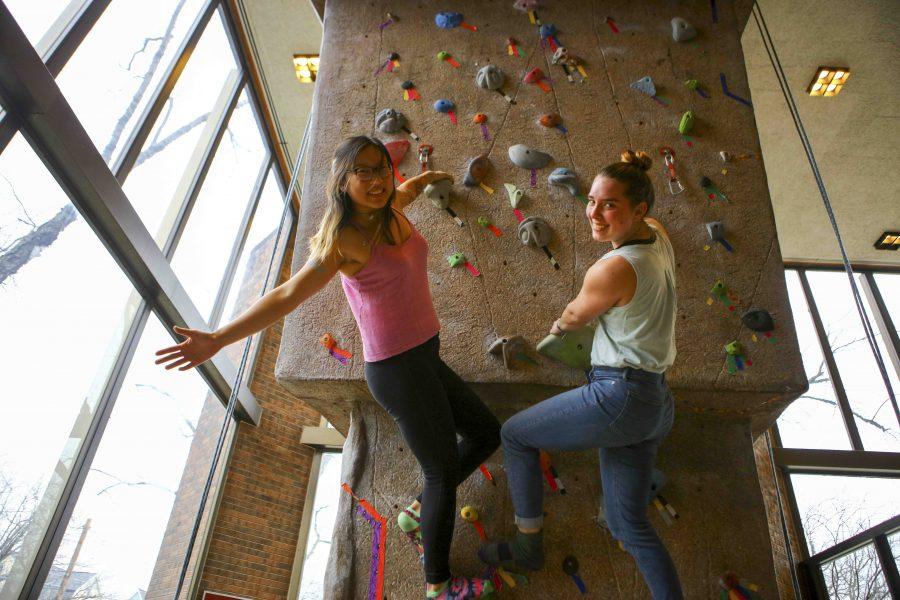 This week, the Review sat down with rock climbing wall supervisors, junior Mel Xu and sophomore Katie Rigdon, to learn more about the close-knit climbing community at Oberlin, their adventures climbing all over the U.S. and how climbing boosts their fitness.

Q: Did you climb before you got to Oberlin?

Mel Xu: Only at my fourth-grade birthday party.

Q: What are all the places that you’ve climbed?

MX: We actually go with the rock climbing wall [staff] every fall and spring break to the Red River Gorge [in Kentucky] to climb.

KR: There’s some climbing in Ohio. I learned how to climb in Red Rock [Canyon], NV, which was really fun.

MX: I never climbed before college, seriously or regularly, until I got here. This is so accessible. For students it’s free. Anyone that’s a gym member or a townsperson can come for $10 a year, which is unheard of for any climbing gym. It’s usually $20 for a day, and then you have to rent your own gear, which ends up being $30, but here it’s pretty much free. That’s why I started climbing here.

Q: How’s the community around the climbing wall?

KR: It’s a huge mix of people. It’s mostly students, but also there are some professors who come and climb and also a lot of community members and their kids. Our whole wall is also student-set, which means that students are putting up all of the different routes on the wall. So it’s awesome. It’s a huge community of people of all different ability levels, and I think that people are really good about supporting everyone and making everyone at all levels feel really welcome and excited about climbing.

MX: We have these new beginner hours now on Saturdays from 2:30–4:30 when only beginners are allowed so that everyone feels comfortable. I’ve talked to a lot of people who don’t feel comfortable because sometimes people are so intense and really, really good, so it’s kind of scary your first time coming in. But now we have beginner hours and POC hours and women and trans hours to create safe spaces for everybody. And we have family hours, but those are open.

Q: What benefits do you get from climbing?

KR: I actually exercise at college, which I don’t think I would be doing if I wasn’t climbing.

MX: Same. It’s a lot of fun, so you don’t realize you’re exercising. You’re just trying to get to the top. Then, after a few weeks, you realize that you have a lot of muscle that wasn’t there before.

KR: Climbing is half a social sport where you just hang out with people and also half working hard, pushing yourself, trying to get stronger.

MX: I feel like climbing has also motivated me to work out more. I’ve been doing a lot of push-ups and opposition training to avoid injury, and also I want to get into the weight room more so that I can do certain moves and certain things on the wall. I didn’t have any reasons to lift weights before I started climbing.

MX: Probably the people, honestly. That’s what drew me here first. When I was a freshman and I didn’t have any friends, I came here and was like, “There are so many cool people here and I want to be their friends. And I really like climbing.” So then I just came here all the time.

KR: I totally second that. Also, climbing is just so tangible — you’re able to feel the difference in your improvement [when you climb] and it’s awesome.

MX: You physically can see the difference. Say I’m working on this yellow route here, and I can’t make this move for some reason. I keep working at it, and eventually one day I’ll surprise myself and say, “I got stronger!” And then it’s a physical, experiential thing where you did it and you’ve improved visually.

Q: Do you have any big goals for climbing?

MX: I want to climb at Yosemite and other beautiful places. I think being inspired by and looking into the climbing world and its famous people, the most appealing thing about their lives is the places they get to go — these beautiful, almost-untouched places that are so awe-inspiring. I just want to go to those places.

KR: Although it’s definitely more about having fun, I do have grade goals. There’s this thing called the Yosemite Decimal System. If I could climb solid 12s in my lifetime, that would be awesome, but that’s a pretty lofty goal.