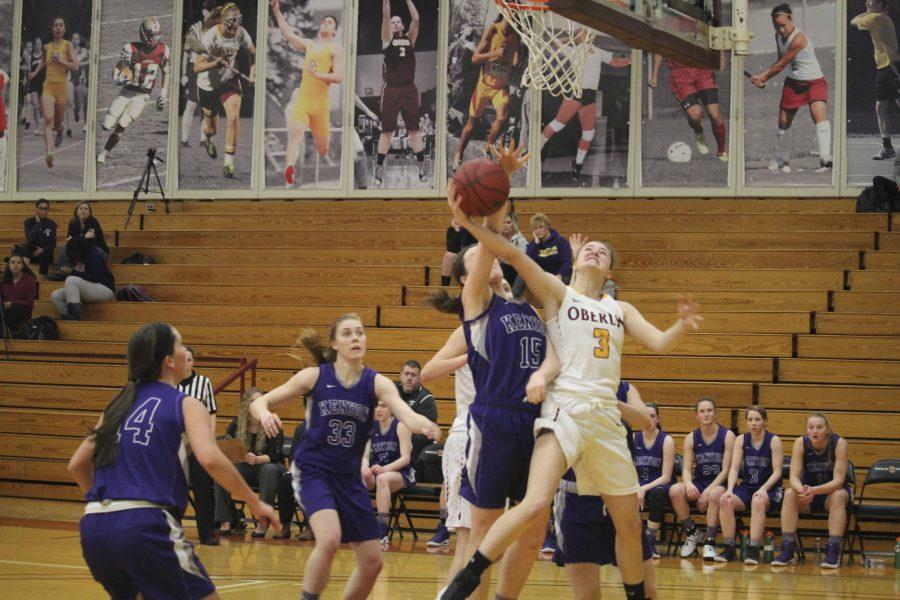 First-year guard Ally Driscoll puts up a contested layup in Oberlin’s game against the Kenyon College Ladies Wednesday. Oberlin’s 52–41 win over Kenyon boosts its record to 7–6 in NCAC play.

A key conference win is propelling the Yeowomen through the final stretch of their season, with a 52–41 over the Kenyon College Ladies on Wednesday. The victory moved Oberlin to 10–12 on the season and 7–6 in North Coast Athletic Conference play, and puts the team within reach of a top seed in the NCAC tournament.

“We are getting better game by game,” Head Coach and 2015 NCAC Coach of the Year Kerry Jenkins said. “We think that we can play with anyone in the league. We have to focus on continuing to improve.”

After taking an early 14–0 lead, Oberlin used a team-high 18 points from sophomore guard Alex Stipano to cruise to victory. Joining her in notching double digits were sophomore center Olivia Canning and junior forward Abby Andrews, who scored 11 and 10 points respectively. With the postseason drawing nearer, Stipano said the team is ready for its final three games.

“At this point in the season, most teams are very tired, so we hope to limit that effect on us down the stretch,” Stipano said. “With this, and our team goals, we should be fierce competitors in our remaining games.”

Stipano, who missed all but six games last season with a knee injury, has quickly taken the reigns at guard, scoring the second-most points per game, 9.3, for the Yeowomen this year.

“Coming into this season, my goal was to help the team in any way that I could,” she said. “I really did not know what to expect, considering I had not really played for about a year… Luckily for me, this season seemed like it picked up where I left off last year.”

Andrews, who notched 10 points on Wednesday, said she is pleased with the performance of the team’s high-scoring sophomores and rookies.

Prior to toppling the Ladies, the Yeowomen earned a 62–41 victory over the College of Wooster Fighting Scots on Feb. 1.

Oberlin jumped on to an early lead over Wooster, taking a 16–6 first-quarter head start, and maintained comfortable control over the matchup for all four quarters. Stipano, Andrews and Canning combined for 34 points on the evening.

The Yeowomen are peaking at the prime time, with only three regular-season games left before the NCAC tournament.

Jenkins, who will finish his ninth season with the Yeowomen as the winningest coach in program history, said he does not foresee any changes in Oberlin’s approach.

“Our mentality is trying to stay heathy, continue to improve as basketball players and take each game as it comes,” Jenkins said.

The Yeowomen will face the Wittenberg University Tigers in Springfield, Ohio, at 4 pm tomorrow.