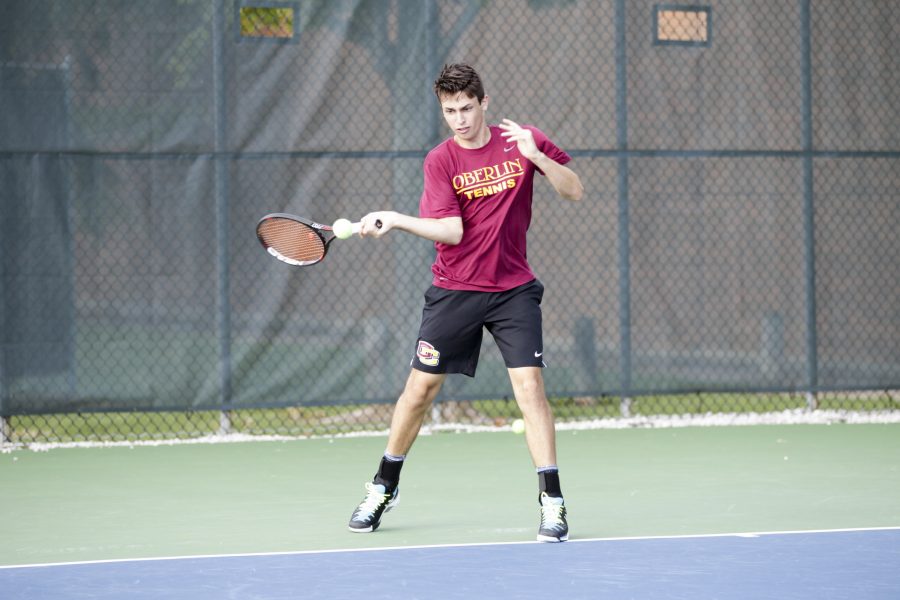 First-year Stephen Gruppuso loads up for a forehand. Grupposo earned wins at No. 3 singles and No. 2 doubles in Oberlin’s decisive 6¬–2 victory over conference rival Wabash College Saturday.

While battles between the Wabash College Little Giants and the Yeomen are typically close, Oberlin dominated last Saturday, sweeping doubles in a decisive 6–2 victory at Medical Mutual Tennis Pavilion in Cleveland, Ohio. Bolstered by a strong class of first-years, the Yeomen are currently ranked 40th nationally and 11th in the Central Region of the Intercollegiate Tennis Association, boasting a 2–0 record.

“We’ve had a solid start to the season because this is one of the most hardworking and talented teams I’ve seen in the past four years,” senior Ian Paik said in an email to the Review. “This is the type of start we were expecting.”

Although the Little Giants have previously posed a challenge to the Yeomen on the doubles court, Oberlin’s doubles teams were a force to be reckoned with this year. The dynamic pair of senior Abraham Davis and junior Michael Drougas topped a Wabash pair 8–1, a victory that was just the beginning of a doubles sweep for the Yeomen. Senior duo Jeremy Lichtmacher and Ian Paik came out on top 8–4, and were complimented by first-year partners Stephen Grupposo and Camron Cohen, who won by a similar margin of 8–3. Paik said he was happy to see the first-years shine.

“The Wabash match was great because we were able to sweep them in doubles, something that they’re consistently strong at, and it was great to watch Stephen and Cameron get their first wins in the spring season under their belts,” Paik said.

Although the Yeomen dominated in doubles, it looked as if the Little Giants could make a comeback when singles play kicked off. The first sets went to tiebreakers for senior Billy Lennon in the fifth flight, Paik at No. 1 and Grupposo at three, but each emerged victorious, a testament to their mental toughness. Lennon rode that momentum and won in straight sets, winning the second 6–2. Paik followed suit soon after, winning his second set 6–2, while Grupposo grinded out a close second set before winning 7–5.

Junior Manickam Manickam was locked in a lengthy battle at No. 4 singles, leading 6–4, 5–2 when the match was stopped because the court time designated for the match was over. Manickam credits the team’s ability to grind through long singles matches to its off-court training.

“I think a huge reason that we have had this strong start is because we are working with [Head Strength and Conditioning] Coach [Grant] Butler on a consistent basis,” Manickam said. “We seem stronger, faster and fitter than the teams we play. That gives us confidence when we step out onto the court every time.”

The previous weekend, the Yeomen started off their spring schedule with a win over the Indiana Institute of Technology Warriors. Doubles play included shining moments for many members of the team, especially first-years Cohen and Grupposo, who blanked the Warriors 8–0 at third doubles in their first match of the season. Drougas and Davis also recorded a decisive 8–2 win at No. 2, while the senior team of Lichtmacher and Paik earned a close 8–6 victory.

Paik fell in singles at the first flight, but the Yeomen swept spots two through six, with junior Levi Kimmel earning his first victory of the season — a 6–1, 6–2 win at No. 6.

The Yeomen will return to Medical Mutual Tennis Pavilion once again to take on Division-I competition from Cleveland State University and Niagara University tomorrow.

Head Coach Eric Ishida said the Cleveland State University Vikings will provide a tough test, but his focus is long-term, as he hopes the squad will show steady improvement leading up to the NCAC tournament in April.

“Cleveland State is probably the best team on our schedule… [so the match] should be fun,” said Ishida in an email to the Review. “The next group of matches will be great opportunities to compete and gain valuable experience. The biggest matches this spring are in April and that is what we are preparing for.”

The coming weeks of the season will see competition from teams both conference and non-conference affiliated. Paik expressed optimism about the matches ahead.