Agave to Reopen Under New Ownership 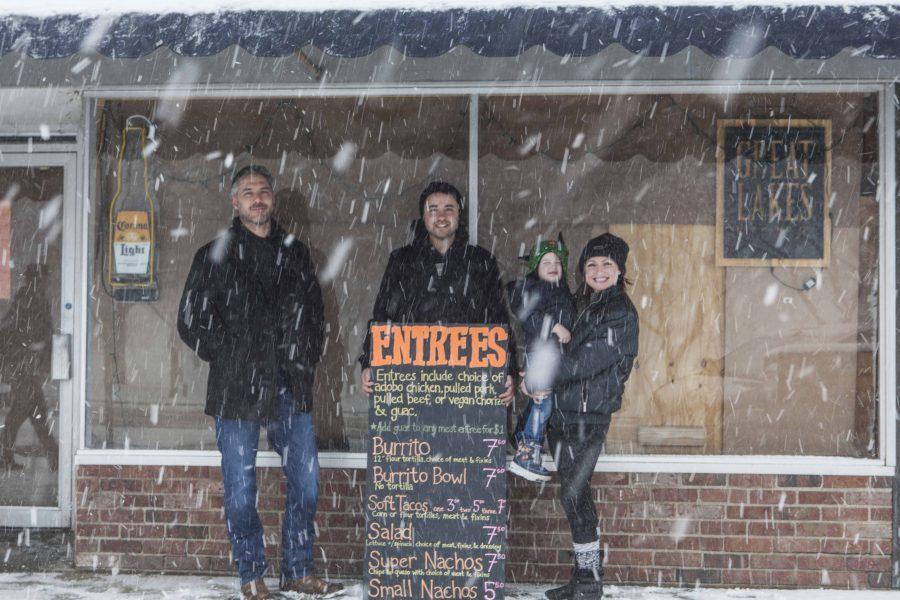 Former Agave Burrito Bar and Tequilaria owner Joe Waltzer, OC '98, (left) stands outside of the burrito bar with new owners Nikki and Jon Stipp and their son Augie. The couple will reopen the restaurant the week of Feb. 20.

The doors of Agave Burrito Bar & Tequilaria will swing open later this month when the downtown staple returns under new management.

On Jan. 25, Nikki and Jon Stipp purchased Agave from previous owner Joe Waltzer, OC ’98, who has owned the restaurant since 2003. Waltzer said he was ready to move on after 19 years as the owner of both Agave and Black River Cafe.

“I’ve been here doing this for 19 years, and didn’t want to do that for the rest of my life,” Waltzer said. “I meant to leave when I graduated, but ended up last minute running restaurants.”

Now, having stayed in Oberlin for years after graduating from the College, Waltzer said he wants to finally live out his goals of traveling post-college and is unsure what his next job should be.

“Basically I’m going to do what I was planning when I graduated,” Waltzer said. “Traveling around, visiting friends, I really don’t know.”

Jon, 32, was born and raised in nearby Berlin Heights, Ohio, before moving to Hermosa Beach, CA, in 2009 to cook for a gourmet taco restaurant. It was there that he met his wife and business partner Nikki, a 31-year-old Los Angeles native, while the two were in a band together. According to Nikki, the two immediately bonded over their passion for the culinary industry, in which they both have over 10 years of experience cooking, bartending and dishwashing.

When the two moved back to Ohio in 2013 and had their first child, Augie, now 3 years old, they looked into buying Agave.

Nikki said that purchasing Agave was an easy decision for her and her husband.

“We immediately fell in love with not only the restaurant for its awesome food and vibe, but the town of Oberlin itself,” Nikki said. “The history and culture, the music, the art. … It was a no-brainer that we had to become a part of it.”

Although the couple was thrilled with the new opportunity to run Agave, a few weeks before officially purchasing the restaurant they ran into problems with the retail space. A water heater exploded in the building and damaged the ceiling and the dining room floors. Nikki and Jon also had to update parts in the back of the restaurant in order to comply with current regulation codes. A new floor was installed in the kitchen and a fresh coat of paint was applied to the walls.

Despite the renovations made, Nikki assured that Agave will remain the classic burrito bar it’s been for years.

“Agave has a great burrito bar concept and affordable drink menu,” Nikki said. “Why mess with such a beautiful combo? We aim to continue to live up to Agave’s impressive reputation.”

She also promised to follow in Joe’s footsteps by providing natural, healthy ingredients that come from local meat sources. The only changes to the menu will be new specials, she added.

Nikki is excited to continue Agave’s traditions while also adding her own spice.

“I am personally really excited to become a part of the community and keep Agave’s reputation as a cool, comfortable hang-out with great grub,” Nikki said. “We are pumped to implement some of the events that Joe used to do, like open-mic night, games, trivia and movie night. We also plan to eventually roll out a rad happy hour menu and some fresh, handmade vegan churros!”

Agave is expected to open the week of Feb. 20, pending the delivery of crucial kitchen equipment.