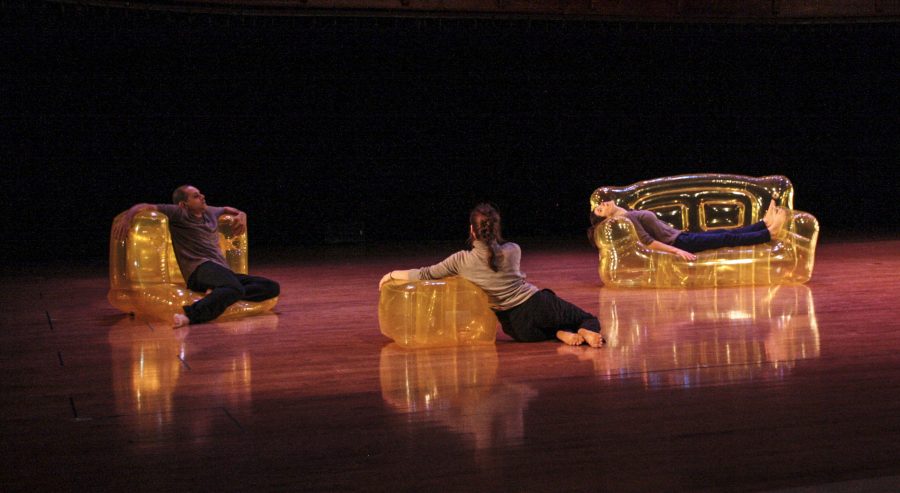 The Dance department held an in-progress showing of Inflatable Trio, a collaboration between dancer and director Lionel Popkin, OC ’92, and TIMARA Professor Tom Lopez, OC ’89, as well as dancers Samantha Mohr and Carolyn Hall, OC ’91, Monday night in Warner Hall’s dance studio. The ensemble will premiere the finished piece next Thursday in Los Angeles, complete with costumes, lighting and a short introductory film, elements that were notably — though not disruptively — absent from the Oberlin performance.

“Choreographically and sound-wise it’ll be a lot the same,” Popkin said. “The main structure … will be very similar, but I think there’ll be just a few more nuances and perspectives in it. It hangs together pretty strongly from [the choreography and sound] elements.”

The dance is set to Lopez’s soundscape, which incorporates recordings of everyday sounds like washing dishes, whistling kettles, thunderstorms and ping pong with sections of bagpipes and nebulous electronic sounds similar to a wineglass chorus.

“Many of [the sound elements] may have helped to place the performers in a particular space, like a kitchen — or in an activity, like playing ping pong,” Lopez said. “The more ‘musical’ elements also help develop the performative world, perhaps with emotional or energetic trajectories. But none of this is specific; when the audience hears ping pong balls, no one is mimicking ping pong on stage.”

The piece itself combines unusual styles of movement — from crab-walking to a half-stork, half-ballet stepping motion — and a set of inflatable yellow furniture for an enjoyably unique viewing experience despite minimal costuming and lighting effects. Even when the three dancers’ movements seemed unrelated, almost disjointed, they displayed an impressive level of stage awareness that somehow held their disparate choreographies together. This was one visible product of just how closely — and how long — the three dancers have been working together, both physically and artistically.

“If there’s a lead position that would be me [as the director], but it was an extremely collaborative project,” Popkin said. “I sometimes have a really clear idea of what I’m doing and sometimes I have absolutely no idea and we’re trying a ton of stuff. … I respect both of their compositional eyes quite a bit.”

All three dancers — as well as Lopez, when he was able to attend rehearsals — contributed to the choreography through a dynamic process of trial and adjustment. Lopez added another layer of give and take with the score, which took shape alongside the dance itself.

“Our process was a mix of back and forth,” Lopez said. “I watched dance that had no music before I shared my initial ideas. And when Lionel heard my music, it changed the direction of his choreographic work. In return, my music changed, and so on. For me, that is the most rewarding aspect of this work, letting someone else’s ideas influence mine and vice versa.”

Popkin attributes his directorial style and collaborative career in part to his roots in Oberlin’s Dance department, where he was surrounded by artists from every field of performance.

“With TIMARA and the [Conservatory] there, for most of my career I’ve always worked with original music, and because of the kind of training I [got], the collaborations with the dancers is very important,” Popkin said. “Everyone bringing their own intelligence to the artistic process is really important, and I think that’s something that comes out of my early introductions to how to work.”

In fact, his artistic relationships with Hall and Lopez also trace their origins to their time as Oberlin students. Popkin and Hall have been working together on and off for nearly three decades, having begun their collaborations at Oberlin in 1988. He and Lopez had done a project together in 1989, but hadn’t worked together since. Lopez has an extensive background mixing diegetic sound, such as recordings from recognizable environments, and nondiegetic sound, which is precisely what Popkin needed.

“I was looking for someone who I felt could go between both,” Popkin said. “Because there’s an element of the narrative in the piece that needs a kind of movie scoring to it, so that you’re dealing with the real material of what’s happening on stage but also the kind of underscore emotional overtones. There are plenty of people who can do that, but not a lot that do it for live performance.”

Despite Lopez’s ideal qualifications for the project, however, it was coincidence that brought the two back together for Inflatable Trio after so many years.

“I weirdly happened to be at a convention talking to his brother-in-law, who’s a choreographer based at the University of Utah, and suddenly Tom flashed into my head,” Popkin said. “[Samantha Mohr] was helping [me] out with another project when we started. She was there from the very early rehearsals for this piece. … The three of us have been working on it for about two years together.”

The shifting relationships and motivations of the figures portrayed on stage weren’t always as easy to trace through the dancers’ movements, which ranged from relatively symbolic of friendship to very abstract.

“I did feel like some aspects of the performance resonated with me,” said double-degree sophomore Helen Hé, a TIMARA student who attended the performance. “I don’t know how to phrase this anymore, [but it seemed to portray] subtle insanity … chaotic relationships and not taking oneself too seriously.”

Physical connection was a recurring theme. The dancers paired off to navigate the stage around the scattered inflatable furniture, at times with a more traditional, fluid grace, at others with steps vaguely reminiscent of a Monty Python “Ministry of Silly Walks” routine. At one point, Popkin appeared to be Mohr’s sole physical support; after rolling around on the floor, Popkin’s body became a dynamic structural support for hers as she lay limply across him, hanging by her knees from his shoulders when he stood.

During these scenes, one dancer would be left in the wings. At other times all three would move in perfect unison with their arms wrapped tightly around one another’s shoulders, taking on a sort of conglomerate personhood.

“This piece started [with] me sort of thinking about how we orient ourselves in a space, in terms of how we find ground but also how we use other people and objects to do that,” Popkin said. “What are the kind of spheres that we set up around ourselves to give us support, and do they work or not?”

The furniture amplified this theme by grounding it in a domestic space. The air in these set pieces became just as significant, giving the staged environment the capacity to breathe with the dancers, who used breath as a kind of scenic reset.

For a piece with fairly grounded themes, however, the score and the figures brought to life on stage rejected neat categorization. Even with a single domestic environment as the stage for every interaction, Popkin considers family too strict a set of roles to project onto the piece.

Inflatable Trio is a piece that deliberately occupies a challenging middle ground with regards to the question of whether the meaning of a work should be measured by its creator’s intent or by the impact it has on an audience.

“It’s still very abstract,” Lopez said. “When there is a musical texture, it doesn’t pinpoint emotion. The audience is invited, actually required, to interpret the performance through their own life experience.”

Hé, who also spoke to Popkin after the performance, came away with a similar impression, that each individual should give their experience watching the piece a personal meaning.

“[Popkin] told me it means whatever I want it to mean,” Hé said. “I honestly don’t think I want it to carry any heavy meanings, because the performers seemed to have a lot of fun, and that’s the most important part.”

Of course Inflatable Trio’s creators have specific ideas they projected onto the piece, but belaboring an audience with a list of meanings they should take away from a performance is neither viable nor productive, especially given the often abstract nature of modern dance.

“Ideally, if you’re clear enough, there’s a connection between how the audience sees it and what you’re intending,” Popkin said. “But I think the idea that there’s a ‘correct’ way to read a piece went out of style with James Joyce.”