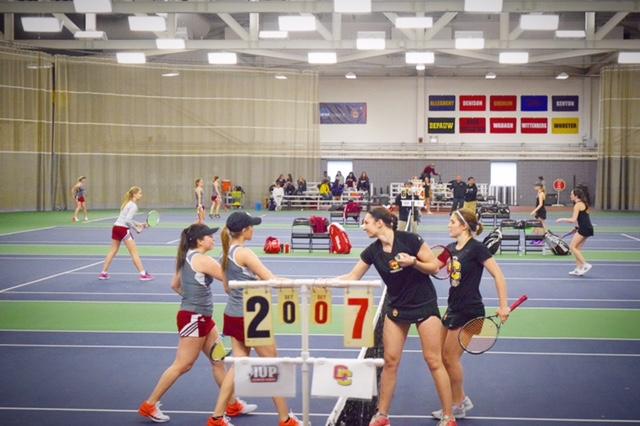 First-years Lena Rich and Rainie Heck shake hands just after match point. The duo won an exhibition doubles match at No. 4 8–2 against Indiana University of Pennsylvania. The Crimson Hawks defeated the Yeowomen 7–2 in the second match of a home-opener double header last Saturday.

Women’s tennis swept the Baldwin Wallace University Yellow Jackets 9–0 in its first win of the season Saturday before falling to Division II Indiana University of Pennsylvania 7–2 later that afternoon. Led by veteran players but bolstered by a strong rookie class, Oberlin’s record stands at 1–2. Though the spring season has just begun, the squad has faced non-conference competition at all levels.

“We have already seen some of the top players in Division III, as well as some strong Division I and Division II players,” first-year Rainie Heck said. “Competing against that level of player has helped us raise our game to match it.”

In a morning matchup against Baldwin Wallace, juniors Mayada Audeh and Jackie McDermott used aggressive net play to win the first match of the day at No. 2 doubles. Audeh attributed the 8–0 victory to solid team chemistry.

“We love playing doubles together,” Audeh said in an email to the Review. “Since we’re such good friends off the court, it makes playing together fun and it’s really easy for us to communicate and work together.”

The squad continued on to sweep all three doubles matches. Junior Sarah Hughes and first-year Lena Rich wielded their biggest weapons — their serves — to take the top flight 8–3, while senior captains Emma Brezel and Olivia Hay notched an 8–2 victory at No. 3.

The singles matches were no different with the Yeowomen taking all six flights. Brezel, Audeh and Heck played in the top half of the lineup while first-years Delaney Black and Lena Rich played Nos. 4 and 5. Hay rounded out the lineup at No. 6. Each player finished their match in straight sets, but singles play was highlighted by Emma Brezel in the top flight. Brezel went on to win North Coast Athletic Conference Player of the Week.

As the team headed into the afternoon match against IUP, ranked No. 28 nationally in Division II, Brezel said she tries to instill a sense of fearlessness in her teammates.

“I just remind[ed] everyone that just because a team is D-I or D-II or higher-ranked than us, it doesn’t mean we don’t have a chance,” she said.

Doubles against hard-hitting IUP proved a tough challenge for Oberlin, although the sizable home crowd cheered the Yeowomen on enthusiastically. Junior Audeh and first-year Delaney Black lost a decisive bout 8–4 at No. 2 doubles. The last two matches on court were the first and third flights, which both went to tiebreakers.

In a No. 3 match filled with momentum swings, McDermott and Hay fell to an early 5–2 deficit, but fought back to go up 7–6. Attempting to break their opponents’ serve, the Oberlin duo was unable to close out a match point. They eventually fell in the tiebreak 7–2.

All eyes then turned to Court 1, where the veteran team of Hughes and Brezel was in the midst of a tiebreak battle against the 15th-ranked Division II doubles team in the nation. The duo got up to a quick 6–0 lead in the tiebreak before IUP answered with two points. Brezel and Hughes then closed it out at 7–2 to save the Yeowomen from a doubles sweep, a feat Brezel said she was particularly proud of.

“That was one of the most complete matches mentally and tennis-wise that we have played,” Brezel said.

Heck also had a strong showing for the Yeowomen as she tallied the final point of the day, earning her fourth win of the season in straight sets at the sixth flight. She credits her hot start to her teammates.

“When everyone is out there giving 100 percent, it’s really motivating to keep fighting even when things get hard in a match,” Heck said.

The rest of the Oberlin squad did not fare as well as Heck, as the Yeowomen dropped the other five singles matches. Brezel came out on the losing end of the closest singles set, 7–6, and would go on to drop the second 6–2. Audeh was bested in the No. 2 match against IUP’s Luise von Agris, who is ranked 50th in Division II singles. Hughes and McDermott were also bested in their respective No. 1 and No. 4 matches.

Despite the loss, Head Coach Constantine Ananiadis said he likes to schedule more difficult teams early on in the season to help the Yeowomen long term.

“Once you’ve seen the ball come back hard at you from DI and DII players, playing the likes of Kenyon in April shouldn’t seem too tough,” he said in an email to the Review.

Ananiadis added that while Heck’s 4–0 day and Brezel’s Player of the Week accolades were impressive, some other members of the team showed “minor, yet significant, improvements and highlights that might not necessarily have translated in wins.”

The team has three home matches within a 24-hour span this weekend, starting with Kalamazoo College at 5:30 p.m. today. Saturday, the Yeowomen will face Hope College at 1 p.m. and Ashland University at 4:30 p.m.