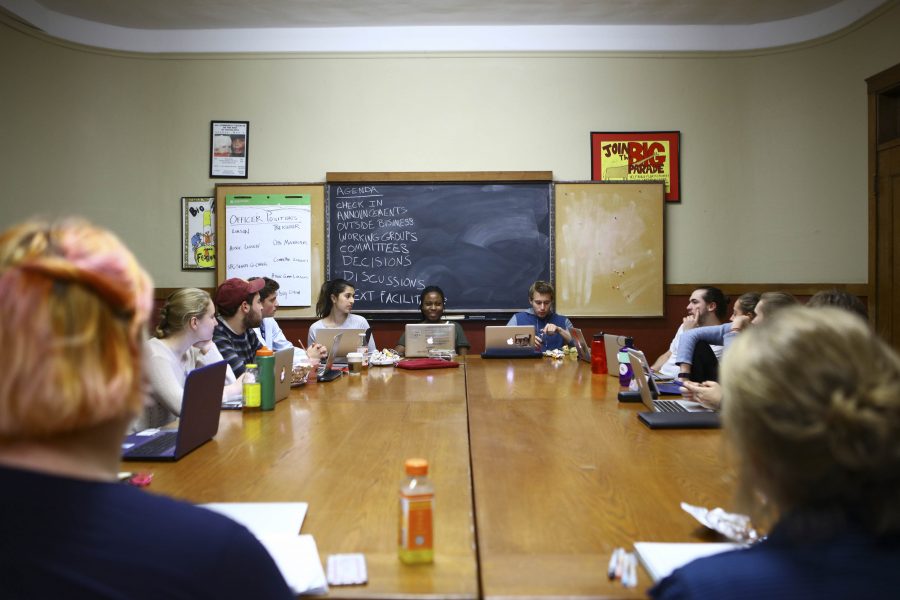 Student Senate met for the first time since elections in Wilder Hall Sunday evening. The new group is introducing a focus on student activism.

As a group of newly elected representatives settle in, Student Senate is increasingly embracing its institutional influence and activist sentiments — a shift from just a few years ago when student interest and participation in Senate was at a low.

Last week’s Senate election brought 25 students to the spotlight as they jockeyed and campaigned for one of the eight open seats on the 15-person Senate. Engaging in student activism was a common theme across the board.

At Sunday evening’s plenary session, some new priorities included working with Oberlin College Office and Professional Employees in the face of budget cuts, protecting those that will be affected by the Trump administration’s new initiatives and continuing to push for a student representative on the Board of Trustees.

Student Senate Liaison and College junior Thobeka Mnisi, who was re-elected this cycle and received more votes than any senator in recorded Senate history, spoke to how the group is asserting itself as student body representatives.

“At this point, it really would be to the detriment of the student body if we didn’t at all consider ourselves as a political body, because we don’t have the option to be apolitical because of the direction the country is going,” said Mnisi. “And also because of the significant number of students who are directly affected by the decisions that the administration has already made, but also has expressed intention of making in the future.”

Last semester, Senate took strong stances on controversial topics, publishing a resolution to boycott Gibson’s Bakery and campaigning for a student-representative position on the Board of Trustees. Senators also wrote a statement to the student body condemning the actions of Oberlin Alums for Campus Fairness.

Newly elected College sophomore Kai Joy said she believes that Student Senate must be outspoken. Last week, Joy was a co-writer of a list of demands requesting greater transparency from administrators.

“Recently, Student Senate has been seen as this group that’s supposed to be representative of the student body, but at the same time isn’t supposed to take any political stances,” Joy said. “At this point in time, with regard to what’s happening in the nation, with regard to what’s been happening on campus in the last few years, … I don’t think we can afford to be apolitical any more.”

“How do we help people doing overlapping activist work find each other, so they can team up?” Wallace said. “Senate can play a huge role here as friendly info gatherer [or] repository — I want this to happen and want to help.”

However, some students are still skeptical of Senate’s ability to enact change.

“My view on Senate is that essentially no progress has been made to politicize it as an institution since [Defending Oberlin Financial Accessibility] a few years ago,” College senior and former Senator Jordan Ecker wrote in an email to the Review. “I view Senate’s apoliticism as conservative, and their status as a fundamentally administrative body as a deliberate strategy on the part of the administration to dilute and blunt student’s political efforts. … The largest change Senate could enact would be to become properly political, that is viewed by the student body as a political organization spearheading confrontation with the administration.”

Despite the criticism, others who have been involved with Senate feel optimistic about the group’s future.

“There is no question that Senate is a more legitimate and more powerful institution then when I came onto it in the fall of 2015,” said Jesse Docter, College junior and Senate’s Strategic Planning Liaison. “At this point we have much more access and channels of communication with the Board of Trustees and the administration. I think that our relationship with activists is a lot better. I think we’ve come a long distance from our reputation as the body that passed the cigarette ban for instance.”

A number of student groups echoed Docter’s positive outlook on the new Senate group and are hopeful about its potential support in their activist endeavors.

“I believe that this new push by Student Senate to get more involved in activism on campus is crucial, and I hope it does not fizzle away,” said College sophomore Juan Contreras, co-chair of La Alianza Latinx. “La Alianza Latinx recently signed the Students Building Community Power petition and has distributed [its] lists of demands. We hope that Senate follows in this direction and reaches out to student activist organizations in shaping their goals moving forward into this semester and the future years.”