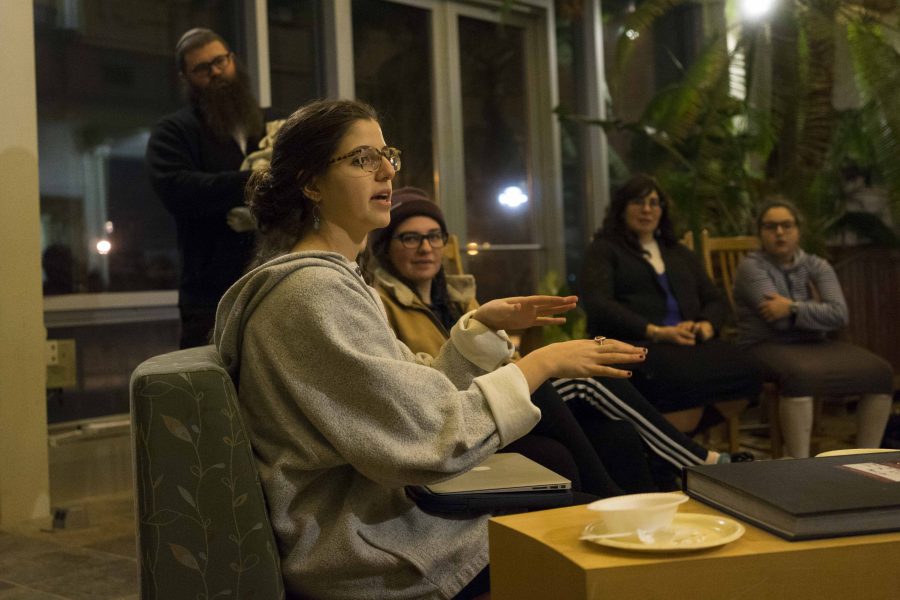 College senior Isabelle Harari speaks at “Roots: Exploring Jewish Identity Through Family Stories & Culinary Traditions,” an event Wednesday put on as part of the “How Do You Jew?” series.

At first, the timing of Tu B’Shevat, the Jewish new year of the trees, seems like a strange choice. After all, it’s the middle of winter, and there are no leaves or buds to be seen. Although we can’t see it, this time of year is when root growth begins again after a period of dormancy. This theme inspired Wednesday’s event “Roots: Exploring Jewish Identity Through Family Stories & Culinary Traditions,” held in the atrium of the Adam Joseph Lewis Center for Environmental Studies.

For College first-year Nina Harris, who sits on the Chabad student leadership board and was the primary organizer of the event, connecting the growth of trees with an exploration of Jewish identity through food and storytelling was a logical match.

“We wanted to do something to celebrate Tu B’Shevat,” she said. “We came up with this idea of exploring identity through your familial relationships — ‘How does your family’s roots [sic], or your family history, impact your Jewish identity?’ And like all Jewish practices, we had to include food because that’s just pivotal to Jewish holidays.”

To gather the recipes that would be prepared and served at the event, Jewish students were encouraged to submit family stories and recipes through a form on the Oberlin Chabad website. When submitting a recipe, students were asked to reflect on what they knew about their family’s immigration to the United States and how that history has impacted their Jewish identity.

On Wednesday night, a small group of students gathered with Chabad Co-Directors Rabbi Shlomo Elkan and Devora Elkan in the AJLC to try some of the recipes and tell stories of how the food came to be important for them and their families. The event featured traditional Jewish dishes, including matzoh ball soup and noodle kugel, and some more surprising offerings including banana bread with chocolate chips, brownies, soft-boiled eggs and sugar cookies.

The recipe for the cookies was contributed by College junior Anabel Epstein, who contextualized them with a story about her great-grandmother.

“My great-grandmother — we called her Nanny … would make … sugar cookies with apricot jam in the middle … and she’d coat them with powdered sugar,” Epstein said. “I remember every Shabbat, my mom would make them, and me and my brother and my sister would be standing by the oven waiting for them to be done to have Nanny’s cookies.”

Reflecting the historical and intergenerational nature of the event, Epstein contacted her grandfather before submitting the recipe and discovered another layer of the story behind the recipe.

“Nanny … would just walk around the house with a little basket, and my grandpa and his siblings would have to earn the cookies from her,” Epstein said. “So it’s just this long legacy of these cookies being seen as gold when really they’re just these simple sugar cookies.”

As students shared their family’s immigration narratives and how these recipes became meaningful traditions passed down through generations, a secondary theme to the event soon emerged. Everyone told a story about love. Some of the stories were romantic — the brownies served came from a wedding recipe — while others centered on the love between siblings, such as College senior Anna Weiss’s story of how her grandmother reconnected with her great-uncle 30 years after they had both survived the Holocaust. Rather than simply telling the history of the recipes that were being shared, the food was a starting point for larger narratives about family connections.

“I was honestly very surprised,” Harris said, reflecting on the themes that had come up in many of the stories. “I thought it was really interesting. … There were a lot of different stories about love.”

The “Roots” event was part of the ongoing “How Do You Jew?” series, which has highlighted many forms of creative art including photography, creative writing and spoken word. The overarching motivation of the series is to facilitate dialogue and storytelling around Jewish identity.

“The biggest charge of this event is creatively talking about … Jewish identity,” Rabbi Elkan said. “One of the reasons for the overarching series is to make people feel … that it’s OK to talk about these types of things. … We want [people] to know that they should be empowered in who they are as a spiritual entity and be comfortable in sharing that with others.”

“From how I see this event, it’s a unique opportunity to reflect on generations before us and honor them, where we come from,” Epstein said. “Although it is a religiously affiliated event, I consider it more historical.”

The hope, according to Rabbi Elkan, is to continue to collect these types of recipes and eventually create a family story cookbook for the Oberlin Jewish community.

“Food and Jewish celebration are so intertwined,” Rabbi Elkan said. “So many holidays — and every single week, even, around the Shabbos table — we celebrate with delicious food, … community and family. So many people have their grandma’s matzoh ball soup recipe, or their brisket, or their noodle kugel, or whatever it is that really hits home for them.”