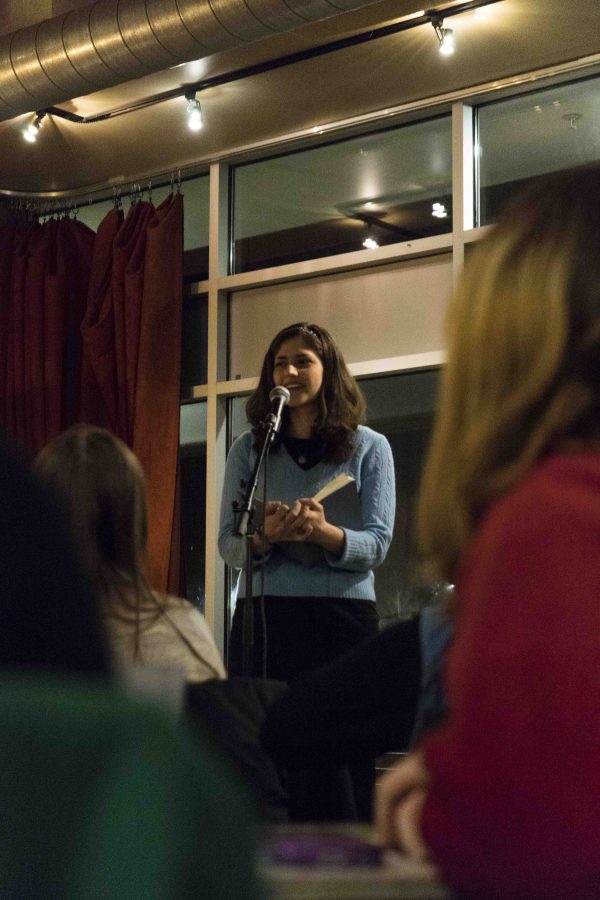 College senior Sarah Chatta performs at Slow Train for Love in Many Tongues, a multilingual poetry reading organized each year by the Oberlin Center for Languages and Cultures to celebrate Valentine’s Day.

Some say that love is a universal language. This idea was explored Monday evening at Love in Many Tongues, a multilingual poetry reading at Slow Train Cafe.

The Oberlin Center for Languages and Cultures organizes Love in Many Tongues each year as a way to promote the dozen languages offered at Oberlin — as well as others not offered — while simultaneously celebrating Valentine’s Day. Oberlin students, faculty and community members read poems and sang songs in a wide array of languages — ranging from Mandarin to Russian to Bissau-Guinean Creole — as well as their English translations.

Rosalind Soltow, the administrative assistant for the Center for Languages and Cultures, has planned this event for the past three years.

“The whole theme of the event is to express love — whatever that may be,” Soltow said.

Poets conveyed this theme in a variety of ways. College senior Jean-Paul Gilbert described a poem he recited from memory in Russian as a “very ‘friend-zone’ poem.” Brandon County, a visiting professor of French, read Ndongle Akudeta’s untitled sonnet in Bissau-Guinean Creole, a Portuguese-based language mostly spoken in Senegal.

“What I find most interesting about this poem is … it’s a love sonnet both to a person, and … to the language and country it’s from,” County said.

Other poets, whose passion for their respective languages came through in their crisp diction and emotive reading, expressed different kinds of love. Some readings spoke of motherly love, others of love lost and still others of rekindled passion.

One standout performance was by College senior Sarah Chatta, who performed “Guest,” a Russian poem by Anna Akhmatova, with intense expression and emotion. She spoke of the “darker kind of the love” that the poem espouses, particularly with the lines “I asked: ‘What do you want?’ / He replied: ‘To be with you in hell’.” The audience of about 40 people sat enraptured by her reading; afterwards, the room went completely quiet, then erupted into applause.

Those who attended the event enjoyed not only the stellar performances, but the diversity and beauty of all the languages represented as well.

“I really like how it was in many different languages,” said Francesca Giordani, a Language teaching assistant in Italian, who decided near the end of the night to read lyrics to an Italian song. “You sit and listen and try to guess what they’re saying.”

Sirine Madani, a French language teaching assistant from France, agreed. “Even if you don’t understand what they’re saying, you can feel the pain of some of the poems,” she said.

Throughout the night, the mood of Slow Train changed in response to what was being read. Sometimes it dipped to match thematically darker works, as it did when College junior Hassan Bin Fahim read an Urdu poem entitled “Before We Become Unfaithful.” Other times it soared, as was the case when Madani read “The Children Lovers” by Jacques Prévert.

“I chose to read this poem because it’s very simple, but very pure,” Madani said before reading the poem in both English and French.

Most who performed at the event were involved in some capacity with the Languages and Cultures Center. For some, participating in the event was a way for them to share their love of languages. Others saw the event as a creative outlet for the deep connection they felt to the poetry they read.

“For me, it was more than just reading a poem,” said Language Teaching Assistant Maria Tsedrik, who performed “I like…” by Marina Tsvetayeva in Russian. “It was a way to express myself.”

Others saw Love in Many Tongues as an opportunity to fill an intrinsic need to speak their native tongue.

“When you are teaching in a foreign country, … you have this special need to share your language with other people,” Madani said.

Ultimately, Love in Many Tongues demonstrated Oberlin’s commitment to diversity and respect for different linguistic cultures. It was refreshing to see students, faculty and community members all sitting in rapt attention, ready and willing to listen to different languages and open their mind to foreign cultures. On the eve of Valentine’s Day, many different perspectives gathered under one roof and united under a single thematic banner — love.

“I think it’s important in this space and in this time too,” Madani said. “We hear a lot about the election and Trump, and I think we just need to promote diversity, languages and love.”