On the Record with Musicologist Maria Williams 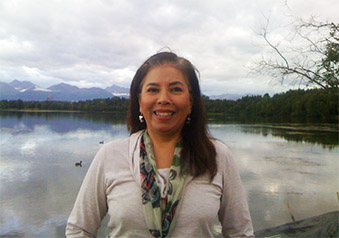 Ethnomusicologist and Director of Alaska Native Studies at the University of Alaska, Anchorage, Maria Williams gave a lecture Monday titled Indigenous Expressive Culture and Environment in the 21st Century: The Role of the Artist in Alaska.

Professor Maria Williams was born and raised in Anchorage, AK. She received a Ph.D. in Ethnomusicology from University of California, Los Angeles and currently directs the Department of Alaska Native Studies at the University of Alaska, Anchorage, where she teaches courses in Alaska Native and world music. She recently produced a documentary called A Beautiful Journey, which chronicles Athabascan Elder Daisy Demientieff’s 750-mile journey in search of roots for her tribe’s indigenous basket-making rituals. She came to Oberlin Monday as a recipient of the Bettman Family Fellowship, and gave a lecture titled “Indigenous Expressive Culture and Environment in the 21st Century: The Role of the Artist in Alaska.” Williams is an enrolled member of the Tlingit tribe in southeast Alaska.

In your lecture, you mentioned that the education system in the United States doesn’t cover indigenous culture and Native American life.

It’s a hidden history. I think in general, Native American history is not covered very well, and when it is covered, it’s very … Hollywoodized. When I went to school, [the narrative] was “The Native Americans invented popcorn and they helped the Pilgrims!” and no one covered the bitter history about land loss and epidemic diseases that had a detrimental effect on the indigenous population. I just feel like we’re missing the boat in terms of being proud of our history as Americans. [It] includes Native American history, African-American history [and] the Atlantic slave trade, and I just feel if we were able to look at the land a little bit differently, … maybe we would be better environmentalists. So I think the history needs to be taught better in the K–12 system.

You said that when you started to look into Alaskan Native American life, you felt it was really healing for you. How so?

When I was taught Alaskan history it was “The Russians were here, and then there was a gold rush, and then we became a state and then we discovered oil.” But what about … [how] in 1945, Alaska was the first state to have an anti-discrimination act because of two Alaska Native women activists? When you read about this history, you understand these sayings like intergenerational and multigenerational trauma. Covering … all that stuff, the present made sense to me, looking through the lens of the past. In this healing journey, as we try to move forward in this positive way, we still have to look back [and] know where we came from.

How do you think that we can incorporate all of this knowledge into school curriculums?

I look at people who do research. There’s certainly a lot of people out there that have written books about … some really interesting [groups] like the Iroquois Confederacy [that] had a huge influence on the founding fathers. If things like that can be heralded a little bit more, then people will begin seeing … Native Americans very differently. One of the things I talked about yesterday was the indigenous worldview, which is a little more holistic in nature. A bigger step than just incorporating … indigenous histories into our regular curriculum is … understanding who … Native Americans [are]. Why are there these reservations? What land did [Native Americans] traditionally live on? The indigenous worldview looks at everything as connected. In the academic sense you would say it’s very interdisciplinary — it’s a more woven worldview. Some people compare it to a spider web … you touch one strand and all the other strands wiggle. But it’s true that [while] we live in a very interconnected world, we just don’t view it that way; we compartmentalize everything into different sections.

I do feel that K–12 education is a very different place than higher-ed in terms of incorporating the indigenous world view, especially because in K–12 public schools you get learning standards and testing.

The Western classroom as we know it today was based on the 19th-century industrial [workforce]. [Teachers] were training people to be workers, show up on time [and not] question anything, … but unfortunately we haven’t moved past that model. I look at the Maori in New Zealand — they revolutionized their schools in the [’80s by letting] Maori elders into the classroom so [students could learn] some of the language. The possibility of having parents or extended family in the classroom [helps]. The [Maori] actually have a whole educational philosophy where they incorporate their societal values into the learning, and I can’t say the Western classroom does the same. I think it would have a profound effect on the children as they move through the system; they might start thinking differently.

I kind of hate to ask this question, but I think it’s interesting because we do have Betsy DeVos as our new education secretary. Is there a way we can talk about doing all of this without federal support?

I think [one way would be] if local people got more involved in school board elections [and] paid a lot of attention to the school board candidates. The school board can potentially have a lot of sway. Also, as Americans, we’re not exposed to other models. We need to start pressuring for changes, and some of these are small: Does school really need to start at 8 a.m. for these little kids? [We should create] a curriculum that’s reflective of the local history.

Let’s talk more about cultural revitalization. How have you seen that manifested?

I’ve seen a huge revitalization in traditional dance practices — certainly in Alaska [and] also in other parts of the United States. When I lived in New Mexico, the young people [seemed] to embrace their identity [more]: There isn’t any hiding of who you are; the shame is gone. But the other manifestation of revitalization is language. In Alaska, now, a lot of young people … are studying their native languages.

Can you say more about dance, how that has played out and what it looks like?

As I mentioned in my lecture [Monday], dance was kind of hidden. You would never do anything to bring attention to your Nativeness, [but] now you see people wearing their traditional Native clothing, just because they’re proud to be Alaskan. I would say even some older people have gone back and joined dance groups because it’s something they’ve always wanted to do, and they return to drumming and singing.

Can you tell me about the difference between dancing in a private setting versus dancing at a festival or on a stage?

If you are from a village in Alaska … and your dad is a drummer, … you come to practice one day, and you just start to do the motions [as a young child]. Then gradually you learn the songs and the regalia is made, and then you have an opportunity to go to a dance festival. Dance groups grow and split up and it just blooms.

I was really interested and really moved to see the Alaskan Natives at the Standing Rock protests and I was wondering what you thought it meant that the different Native groups are standing up for each other?

What’s so exciting about Standing Rock and that whole [NoDAPL] movement is the fact that … it all started on Facebook, [not mainstream media]. I was impressed that there was so much solidarity with that, solidarity among all people — Native, non-Native [and] international people [who] traveled or donated money. People could see this is wrong. Why do they want to put a pipeline under the Missouri River? That’s crazy. They’re forcing this poor Native tribe to deal with any oil spills that would affect them … because they’re throwaway people, basically. The fact that when they learned about it, people were so passionate about that social justice and … environmental justice, it just gives me hope in humanity.

What do you think is the role art plays in contemporary society?

I think … artists in general are very powerful people. I come from a society [in which] we used to have shamans, and in some cases I think artists are kind of shamans, because they can see things that we don’t see as ordinary people. They can see what can be versus what is already there, and that’s an unusual gift. Whether you’re a poet, painter, dancer or composer, … artists are always going to be out there … [and] can open doors for the rest of us to see things from a different lens.

You said yesterday that creativity is in everything we do.

I feel like we’re trained to think that creativity belongs only to people in art school … when in essence we’re all super creative. If you take that energy and creativity and allow people to think of themselves as [the] super creative beings … we are, then it opens up our way of thinking differently about how we proceed … in our lives. Creativity makes us think of reality as a lot more nuanced [and] makes us better analytical thinkers and problem solvers.