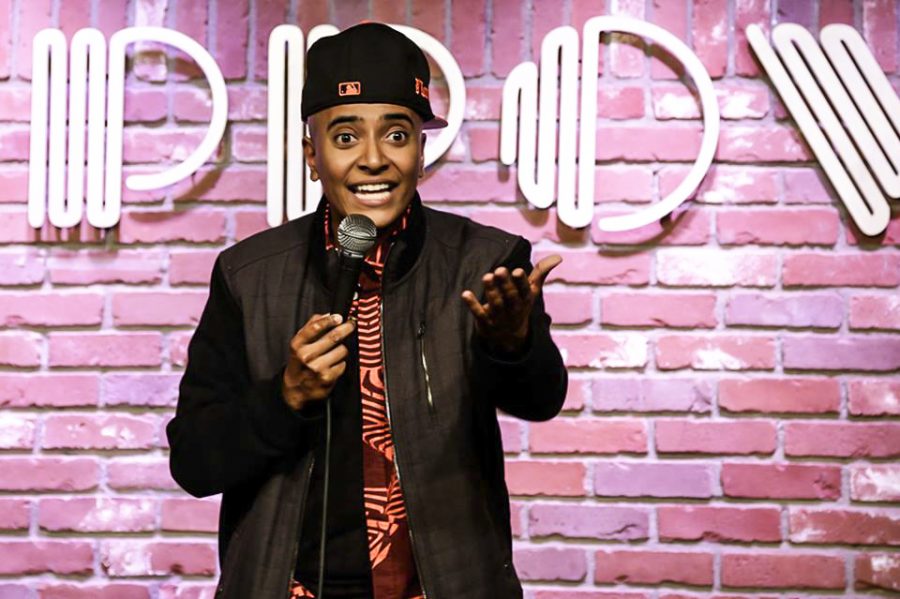 Tamil Sri Lankan trans artist D’Lo will return to the Cat in the Cream Sunday evening with his touring show D’FaqTo Life.

A unique blend of stand-up comedy, poetry and storytelling awaits guests at the Cat in the Cream Sunday as actor and comedian D’Lo brings his touring variety show, D’FaQTo Life (pronounced “de facto”) to Oberlin. The show will be his first in Oberlin since 2013, when he performed as part of Colors of Rhythm, and he’s since gone on to perform roles in HBO’s Looking and the Netflix original series Sense8.

Co-sponsored by the South Asian Students Association, International Students’ Organization and the Comparative American Studies Department, D’Lo’s performance — organized by College sophomore Yasmine Ramachandra — finally arrives at the Cat in the Cream after several months of planning and near misses.

“I talked to [the Comparative American Studies department last spring] … and they were going to make this an event under … the [Think/Create/Engage] series, … but something came up … [and] we unfortunately couldn’t bring D’Lo,” Ramachandra said.

According to Ramachandra, last spring’s misfire was caused both by her booking of the ’Sco being cancelled for another event, as well as conflicts on D’Lo’s end. “It kind of worked out in that both sides canceled,” she said. “I’ve been in touch with [Comparative American Studies Chair] Wendy Kozol … since then, and she’s been really generous and helpful. She gave me more money for this [event] and [is helping] promote it.”

Ramachandra has worked tirelessly to bring the show to Oberlin since last spring: She corresponded with D’Lo’s booking agent through the summer and fall semester, and, knowing that SASA — which she co-chairs — would have trouble paying for the event on its own, she took matters into her own hands.

“I knew that [SASA] didn’t have enough money to do an event like this, … so I ad hoced individually for [the money],” she said.

“Not that I wouldn’t have come [to Oberlin] normally, but [Ramachandra] worked her ass off trying to make sure I got paid and … [that] everything was smooth. … I’m just really moved … by the lengths that she went to [in order to] bring me out there and that she was dedicated to continuing a conversation with me around what it was going to look like and when the right time was,” he said. “I’m really honored by that.”

About a week after submitting her proposal, Ramachandra discovered that the Student Finance Committee had provided more funds than she initially asked for, something she attributes to the importance of intersectional programs like D’Lo’s show.

“A lot of my work is about my life, and … I identify as a transgender, queer, Tamil Sri Lankan American,” he said. “The journey has been one of coming from an immigrant family being the first to be born here on my father’s side … and then being raised … in a very … tight Tamil Sri Lankan community in a very hick town and knowing that I was queer all along.”

“I don’t think many [programs on campus] are oriented toward minorities in an intersectional way, … but [D’Lo] brings a lot to the table. … I think that resonated with a lot of [SFC members],” Ramachandra said.

As for the show itself, audience members can expect solid jokes from D’Lo’s stand-up routine interspersed with candid storytelling and possibly poetry, something that D’Lo hasn’t included in his sets for some time. College sophomore and poet Fernando Borges will open the show.

Additionally, the show will feature a discussion between D’Lo and the audience after his set, moderated by Assistant Professor of Comparative American Studies and Africana Studies Afia Ofori-Mensa.

“[The discussion] will mostly be discourse that’s intersectional,” Ramachandra said. “… I informed [D’Lo] of what happened at Gibson’s, so he knows the recent campus events and was really concerned about the student population.”

In addition to those concerns, D’Lo hopes to engage students in discussion about how to use art to achieve social justice.

“I generally … don’t like Q and As at all, but what I feel is fruitful and what I feel is also part of my duty as an artist is to engage people in a conversation, [both] to learn from people [and] to also share what I have gathered along the way as an artist who strongly believes you can make really good art and also share your desire to make this world better,” he said. “I’ve been to a lot of college … events where there hasn’t been a Q and A, and I feel like something definitely gets missed out on. How many times do we get to just be in conversation with one another … specifically around art?”

D’Lo’s emphasis on art’s role in social justice and creating change was something he underscored by discussing recent political events in the United States, just one day after President Trump rolled back guidelines set by the Obama administration on the inclusion of transgender students in Title IX compliance.

“I would hope that artists have a new mission now,” he said. “There [are] a lot of folks who, kind of in the same strain as me, have been always infusing their work with messages, [which is] just what naturally happens when you are someone who understands themselves to be a politically inclined or social justice-based artist. So I think there are probably a bunch of people who are doing the same thing that they’ve been doing, but there’s just a little bit more to wrap their heads around. … I hope that there are other artists who wouldn’t necessarily call themselves social justice-based artists [that] are definitely looking at these times and at least praying and hoping for a better world and [thinking about] what their artistic contribution to making that happen is.”