In The Locker Room with Ultimate Frisbee 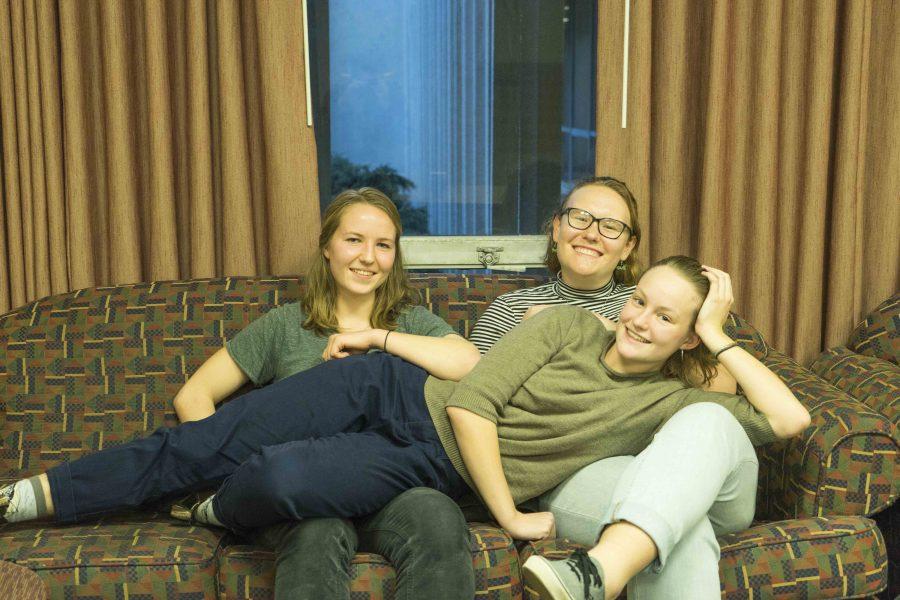 This week, the Review sat down with senior Maya Gillett, sophomore Faith Shaeffer and junior Caroline Beshers, members of the Preying Manti women’s ultimate Frisbee team, to discuss the camaraderie that is characteristic of the sport and the future of ultimate at Oberlin. This weekend, the team will travel to a US Association of Ultimate tournament in Martinsville, VA, to take on teams from Division I and Division III schools.

Q: How is your team organized?

Maya Gillett: In the fall, we operate as one unified program. We recruit people who have played before, people who have never played a sport before. We cast a wide net in the fall. Then we usually split into two teams, an A and a B team, for the spring season, which starts in February and goes to the end of April, usually.

Q: How does leadership work in Frisbee?

Faith Shaeffer: Frisbee is a little more democratic than other sports in that you put yourself on the field and take yourself off the field whenever you want. Sometimes we call lines of people, but often it’s really just individually decided. The captains don’t have to be authoritarian at all.

MG: I think one of the things that really sets Frisbee and other club sports apart is how everything is done by students, and students take the initiative to plan practices and lead workouts and to … get ourselves to and from every tournament.

Q: How did you get started in Frisbee?

Caroline Beshers: During Orientation, there was some casual tossing that was happening and I knew one of the players already. She just really encouraged me. She said the community was wonderful. I wanted the team aspect, and also I know myself and I’m not going to the gym by myself. I like that fact that it’s socially structured exercise. Those were the two big reasons: community and to get moving.

MG: I’m from Seattle and it just so happens that, in the entire world, Seattle is one of probably the top-three cities for youth ultimate. It took off there way earlier than it did in any other city. Most middle and high schools have ultimate teams and they’re quite competitive. I was on a varsity team for four years. Frisbee functions more like a normal sport in Seattle than it does in most places, so that’s how I got introduced to it.

Q: Would you want Frisbee to become a varsity sport at Oberlin?

CB: Is it bad that I don’t want it to? I like it better as a club sport and student-run. I feel like that would go away if we had a varsity coach and more mandatory practices.

FS: Everyone that’s there is there because they want to be. That comes with being a club sport. That comes with being student-run. In a lot of ways I don’t think it’s compatible with the way a varsity program runs. I think we’re competitive as a club sport. Last year we went to nationals. Four years ago we went to nationals. We do well where we are.

MG: If that were to ever happen I think it’s a pretty long way off. I kind of agree that the way it functions, what’s integral to our team and the way that we are, has to do with the fact that we’re not a varsity sport and that we’re self-driven and directed. That being said, I would love to have more institutional support from the school, particularly when it comes to things like field space and budget for travelling, just because we are doing really well and we don’t have a lot to work with, and yet we’ve built a program that’s incredibly sustainable. There’s never any doubt about whether we’ll field a team … a lot of schools aren’t in that position. It reflects a lot of hard work over many years.

Q: What are the obstacles to being a club sport?

MG: We try not to complain about it, but it’s sometimes frustrating when we have a lack of access to facilities to practice in. Our typical winter/early spring routine is that we practice from midnight to 2 a.m. in the Williams Field House because that’s the only time club sports are allowed in there. We are accustomed to that at this point, but it’s a big sacrifice for everyone on the team.

Q: How did the retirement of former Director of Recreation and Club Sports Betsy Bruce affect your team?

FS: [Now things are] being run completely by the Club Sports Council, which is all students.

MG: Except for a couple of kind Student Union members.

FS: Having Betsy was incredible.

CB: She knew everything.

MG: Her position allowed club sports to grow and develop. Where we are now, we can hold together a steady maintenance of club sports, but it’s going to be really hard for us without someone who’s professionally tasked with developing club sports and getting more students involved in them to start any new initiatives, form new teams, get money for those teams. Not filling Betsy’s position has been a challenge, and we’re coping, but you only want to cope for so long.