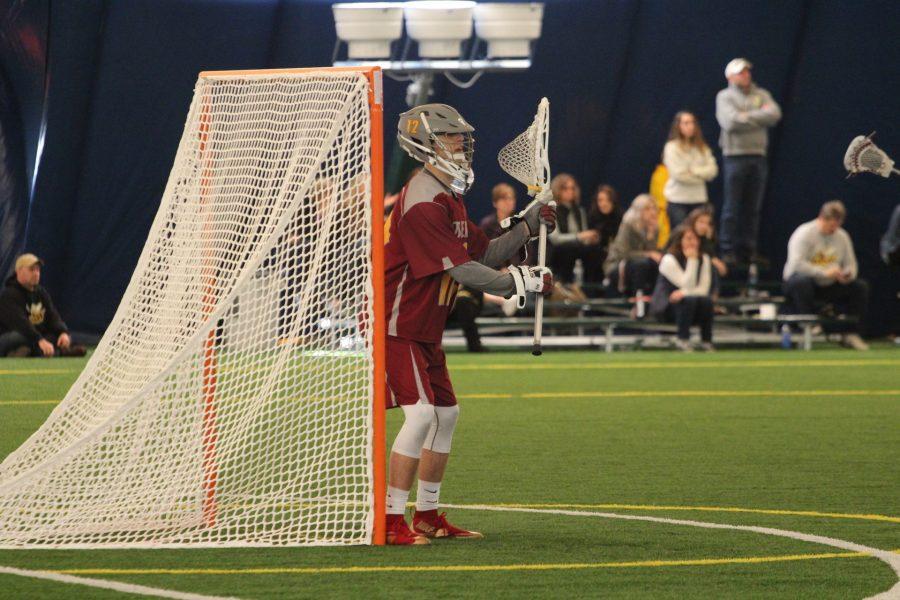 “I think we’ve found out that we have a lot to learn,” Grossman said. “We have a lot of areas we can improve on. We’re certainly a young team, but that doesn’t matter. We need to mature and grow quickly in this process.”

Against the Yellow Jackets, the young Yeomen relied heavily on their veterans. Senior attack Jack Fabrizio broke the ice for the Oberlin offense, tying the game at 1–1 early in the first quarter. However, after falling behind 6–2 by the end of the first quarter, the Yeomen found themselves playing catch up for the rest of the game.

Junior midfielder Reese Koburov and junior attack Steve Kelleher, also saw offensive success, both tallying a goal in the loss. Defensively, the Yeomen could not stop the Yellow Jackets offense, which outshot Oberlin 40–21 and 29–12 on goal. Despite the setback, senior captain and 2016 All-NCAC first-team selection Kinori Rosnow argued his Yeomen can perform better than the box score suggests.

“These first two games were with high level teams, one of which goes to the NCAA tournament, and since that’s our goal, it’s a good [match for us],” Rosnow said. “The score did not reflect the skill level of our team, I believe the one-to-one matchup shows we can play with these teams. It’s just [about] finding our groove with the guys we have now.”

The Yeomen did not fare better in the season opener, falling 19–6 to the Blue Streaks. Again, the Yeomen kept the score close early on as Kuburov netted the first Oberlin goal to tie the score at 1–1. After the Blue Streaks answered with two goals, first-year Lucas Mendicino notched the next. The Blue Streaks then took control, netting six unanswered points to bring to score to 11–2. At the end of the third quarter, the contest was all but over as the Blue Streaks strengthened their lead to a commanding 13–2.

Oberlin temporarily halted the onslaught with a goal by Steve Kelleher, before losing in a final score of 19–6. The Yeomen only took 18 shots to the Blue Streaks’ 40.

This Sunday, the Yeomen will continue to play non-league opponents when they head to Columbus, OH, to take on the Capital University Crusaders. Last year, the Yeomen fell to the Crusaders 11–8. The team is looking to improve game-by-game as conference competitions loom closer.

“We saw that when we pay attention to the details, we can have success,” Grossman said. “When we get away from those fundamentals, when individuals stray from the pack or we forget what we’re supposed to do, we put ourselves in a hole.”

After battling Olivet College in Olivet, MI, on March 4, the Yeomen will host the University of Mount Union on March 11 in their home opener. With conference play beginning March 18 against Ohio Wesleyan University, Oberlin has time to make improvements, Rosnow believes.

“We didn’t lose because we weren’t good enough, we lost because of things we could control,” Rosnow said. “Once we figure those few glitches out, we’re going to be a very, very good team.”