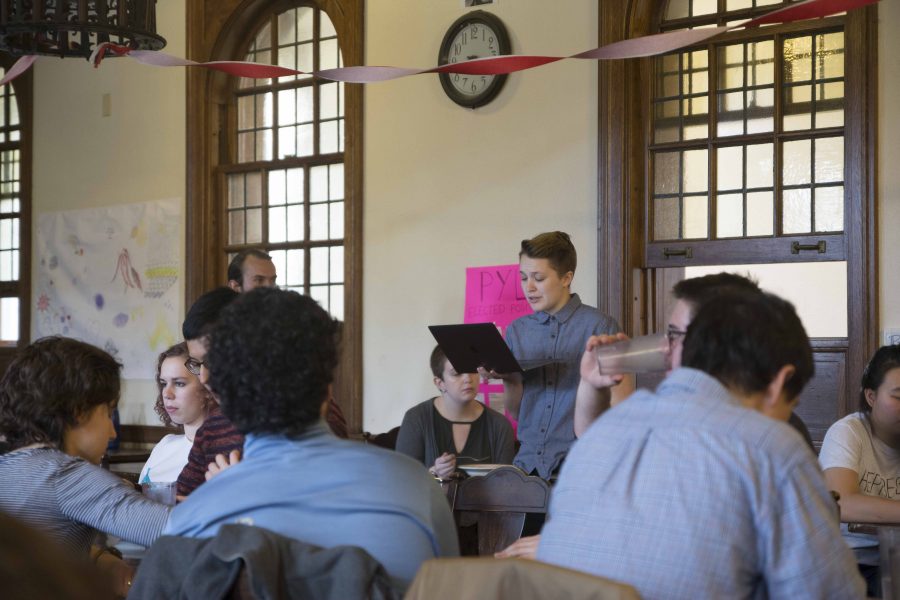 Members of Pyle discuss co-op business during Thursday lunch. OSCA will no longer buy goods from Gibson’s or include the business on its charge list but declined to sign a letter recently distributed by student activists.

Oberlin Student Cooperative Association is exploring different responses to the College’s January decision to resume business with Gibson’s Bakery after protests erupt­ed following an altercation that led to the arrest of three College students in November. In budget preparations for spring 2017, OSCA decided to for­mally end business ties with Gibson’s by removing them from its charge list. Although the group did minimal business with the bakery, the deci­sion ends the running tab that OSCA members had at the store with the OSCA charge card, a debit card that members can use to purchase goods from local stores with OSCA funds.

Recently, members of OSCA have mulled over how to notify Gibson’s of its removal from the charge list. Proposed options include public and private letters to the bakery, but one option differs in that it states OSCA will consider resuming business with Gibson’s if the store agrees to the requests made in a letter drafted by Students Building Community Power — a recently established student ac­tivist organization on campus that focuses on working with communi­ties both within and beyond the Col­lege. The letter, which has been cir­culated by SBCP in the hopes other student groups will sign it, condemns the College’s decision to resume busi­ness with Gibson’s and lists several other demands.

“We urge Marvin Krislov and the administration to cease all business relationships between Oberlin Col­lege and Gibson’s bakery until the following goals are met, and to work to achieve said goals,” the SBCP let­ter reads. “These are to have Gib­son’s drop the charges against the remaining charged students, include students in re-discussion of business agreements between the College and Gibson’s and have the Gibson’s staff attend or commit to attending an anti-racism training.”

After consulting co-op members and hearing student concerns, the OSCA Board decided against signing the SBPC letter and to table the mat­ter until they receive more student input. OSCA Board Chair and College senior Bridget Menkis said the deci­sion was due to mixed feedback from the co-ops.

“The proposal to sign the SBCP letter had mixed results, which means that we won’t be signing SB­CP’s letter as OSCA,” Menkis wrote in an email to the Review. “Individual co-ops, if they decide to, will still be able to sign onto it as ‘members of x co-op,’ assuming the statement is still being released at this point.”

According to the board’s meet­ing minutes, OSCA members had a variety of concerns about signing the document.

“Pyle was concerned about po­tential impacts on all parties in­volved and students involved in the court case, they had questions about who wrote this, potential to drown out individual voices in OSCA, ques­tions of whether it’s OSCA’s job to do this, questions about who will do the anti-racism training, concerns about future relationship with college and community,” the minutes said. “On the positive side, they were excited about the potential for our voices to be very positive and impactful.”

“The proposals were big state­ments that were meant to be widely distributed. … No one had told any of the students that were charged about what OSCA was planning to do — they hadn’t been asked about whether they wanted these kind of publicity statements about their case, whether that would be helpful for them or their cases,” Wallace said. “Definitely the sentiment is great. Its great action, it’s great that they want to support the cause and SBCP’s peti­tion and make sure that Gibson’s ac­tions are condemned, but they just need to make sure that they’re doing it responsibly and carefully.”

SBCP, which was founded at the beginning of the semester and in­cludes 10 organizers, has sent its letter to many political and cultural student groups on campus such as ABUSUA, Students for Energy Justice, the Asian-American Alliance and La Alianza Latinx. For College sopho­more, Student Senator and SBCP member Dani Miriti Pacheco, com­munication with OSCA could have been better.

“We’re in the process right now of facilitating a meeting with OSCA and ABUSUA because OSCA has re­ally, for all the good-naturedness of the demands, kind of been a little bit lacking in communication with the actual parties involved and those who stand to lose the most should a misstep occur, even if it is in the name of allyship — performative or otherwise,” Pacheco said.

Now that OSCA has declined to collectively sign the letter, discus­sions will be put on hold until meet­ings between them, ABUSUA and any other organizations are completed.

“Our board has currently put the matter on hold until further con­tact can be made with ABUSUA and students directly involved in the Gibson’s trial,” OSCA President Tara Wells wrote in an email to the Review.

For Pacheco, this proposal was a promising step, but the missteps speak to a larger issue on campus involving communication and advo­cacy for people of color.

“In general, this is moving a little bit broader than Gibson’s; there’s kind of a precedent on this campus to harness Black and Brown bodies for labor,” Pacheco said. “And that’s a re­ally frustrating precedent, … and re­ally I think generally there just needs to be more communication … and following by example, and with that I think we can do a lot of good things in good places.”