Off the Cuff: Sophie Smith and Alicia Dinsmore, Activists 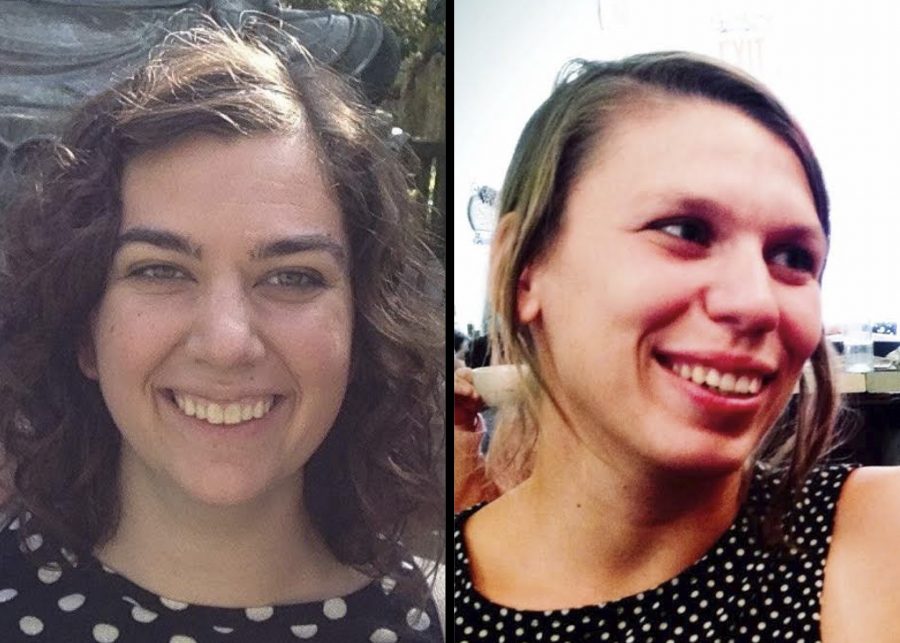 Sophie Smith and Alicia Dinsmore both work in Arizona with La Coalición de Derechos Humanos and No More Deaths, providing humanitarian aid for undocumented immigrants. Smith is a writer, community organizer, and desert aid volunteer. She joined the Abuse Documentation Team in 2015 and coauthored the report series The Disappeared. Dinsmore is from Phoenix, AZ, and has worked providing aid in the Sonoran Desert. She received her bachelor’s in anthropology and global health from Arizona State University. For four years, Dinsmore has worked with No More Deaths, a humanitarian organization based in southern Arizona dedicated to preventing the deaths of migrants in the desert and advocating for faith-based principles for immigration reform. Through No More Deaths, Dinsmore has provided humanitarian aid in Nogales, Sonora, Mexico and to people who have recently been deported. Smith and Dinsmore gave a talk titled “Disappeared: An Abuse Documentation Report from the Border” Wednesday at the Cat in the Cream at 7 p.m.

Could you explain what The Disappeared is about?

Alicia Dinsmore: It’s a report in a three-part series that looks at how practices of Border Patrol in the desert amplify the effects of a deadly policy that has really pushed people into remote terrain and cause them to die and often times go missing. We like to use the word “disappeared” because people aren’t simply going missing. They’re being actively pushed into terrain that causes them to die and often times become unaccounted for.

Sophie Smith: The first part of the report that we’re speaking about on campus today is called “Deadly Apprehension Methods in the Wilderness,” which looks at the practices of chase and scatter by Border Patrol agents when they are attempting to confront and apprehend undocumented border crossers in the backcountry. We find that the daily practices of Border Patrol agents attempting to apprehend people often involves chase over dangerous terrain, assault by agents in the wilderness, and causes many people to scatter and to lose their orientation, to become lost in the landscape, to lose their belongings and travel companions. These daily practices by Border Patrol agents directly contribute to the disappearance of people in the wilderness and desert.

Can you explain what your organizations do and the kind of work you do there?

AD: I have been working with No More Deaths since 2014, and I have a few roles. For one, I volunteer and assist people who have been deported in collecting money and belongings that have been lost in the detention and deportation process. I also help run a free phone service so that when people are deported they can call their loved ones and say “this is where I am and this is what I need to get to where I’m going next.” I also help provide emergency resources for people who are about to cross — things like whistles, materials to help disinfect water that they might encounter in the desert, things like that. I also coordinated the writing of this report and the volunteer team that wrote this report.

La Coalición de Derechos Humanos is an organization in Tucson, Arizona that, for the last 10 years has been working on missing person’s cases. Loved ones, family members, members of groups crossing would often times call this organization trying to find out where people who have become lost in the desert or detained and are somewhere in detention or deported — this organization helps locate those missing persons. In 2015 we actually had a 24-hour hotline that some Oberlin students worked on.

SS: I’ve worked with the desert aid project, which is a disaster relief effort in the militarized zone of the southern Arizona backcountry. We provide food, water and medical care to people in distress, who are attempting to cross into the U.S. without documentation through the desert landscape. We put water on known migration trails. We have a backcountry clinic to provide medical care to folks who have gotten injured or sick from trying to make the journey on foot. I’m also Search and Rescue Team Leader for No More Death’s Search and Rescue Team. I joined the Abuse Documentation team [in 2015] to help write The Disappeared report.

Your jobs don’t seem easy. Have you ever encountered any dangers with authorities or otherwise in doing the work you do?

SS: In doing the work, we believe humanitarian aid is not a crime and that we have every right to be providing direct aid in the wilderness. However, I have had encounters with Border Patrol agents in the wilderness that have been incredibly intimidating. I’ve had guns pointed at me by agents in the wilderness more than once, who either thought that I was crossing through the wilderness or that I was a threat to them, even though I was walking unarmed with water. I think the harassment and intimidation I have experienced is significant, but as a white person with citizenship status the kind of treatment experienced by people of color and tribal people is much worse.

Are there any particular moments in your work that have really grounded your efforts in a meaningful way to you?

AD: About a month ago, I talked to someone who was taking precautions to help them be better identified if for some reason they were to die in the desert. They had things on them that had their name so that if for some reason they passed in the desert, their remains could be identified, leaving family often times without closure, not knowing what happened to their loved ones in the desert. And there are a lot of human remains, so that was a moment that really was grounding and meaningful in knowing how important our emergency supplies are, how dangerous it is in the desert and how important it is for family members to locate those who have disappeared.

SS: In 2011 on Christmas, I was still a relatively new volunteer and a group of us headed out to hike a known trail and put water out. We encountered a woman named Lupe. I have permission to use her name and tell her story. She was lying on the side of the road under a blanket, and she was in respiratory distress. She’d been crossing with a group of men and the guide had attacked her and attempted to sexually assault her multiple times. He hit her in the chest, she ran into the wilderness and it had collapsed her lung. When we encountered her she was only able to say one or two words. We were talking with her about going to the hospital as soon as possible because her life was in danger, and she was crossing because her child had a chronic illness. She was from southern Mexico and couldn’t afford his medication. We work under the principle of consent, so we don’t make decisions for anybody. Direct aid is about giving people options and choices to navigate their circumstances, so this becomes difficult when someone is in a medical emergency because going to the hospital means going into Border Patrol custody, and she was terrified. After about half an hour worrying with her, she agreed to go and be airlifted to the hospital in Tucson and have surgery. Something that happened was that … we went to visit her and she was handcuffed to the bed with a Border Patrol agent sitting right next to her while a sheriff department [member] was coming into the room to interview her as a victim of a crime. She was actually able to obtain a visa to remain in the U.S. because she had survived assault and wasn’t actually deported, which was very impactful for me to understand the web of the power structure.

What do you think the biggest problems for immigrant and deported communities are from what you’ve seen?

SS: While things like deportations, raids and walls are getting coverage in the news more and more these days with the executive orders of the Trump administration … what we feel as on-the-ground aid workers is that what isn’t being covered is the crisis of disappearance and what it means to have a massive population of people who are living in the U.S. without papers. Many of them have survived life-threatening journeys through the wilderness, and many of them have family members who are entirely not accounted for and are missing permanently. I think what’s really pressing and missing is the deadly nature of the U.S.–Mexico border, and the part that Border Patrol policies play in putting people without papers in harm’s way and leaving them to the elements. This is an under-reported and extremely disturbing and painful dimension of what folks without papers are experiencing right now.

AD: Also those other elements listed — raids, deportations, the things that we’ve been hearing —that all goes into pushing more populations into a crossing ordeal into situations where they are forced to risk their lives.

In the face of today’s political climate, what do you think the biggest concerns will be for you and the people you help?

AD: We are receiving a lot of support, people volunteering, a lot of monetary support. Our volunteers have already experienced a lot of criminalization for providing humanitarian aid, and I think that we will expect to see an amplification of that under the new administration. I think that also there’s been a crisis going on at the U.S.–Mexico borderlands for a very long time. We’re going to see a higher volume of people we encounter.

SS: Another piece that’s missing from the conversation is that there’s already [over] 650 miles of wall around the southwest border that has been built in places that have been easy to cross, and the intention has been to use those walls to deflect traffic into treacherous crossings. So the kind of ramping up we’re talking about is to build upon that strategy, so we believe that more people’s lives will be in danger. This administration has made it clear that they do not care about the protection of people’s lives if they do not have status, so I think our work is much more critical now than ever … in order to protect people’s lives.

What do you think might be best concerning immigration policy to best benefit Americans and the migrant communities you support?

SS: We believe in border demilitarization. We think that the only way to meaningful way to address the humanitarian crisis, refugees, asylum-seeking and immigration in general is to take down the walls, scale back military-style surveillance, scale back, if not disarm, the Border Patrol. We believe that a military approach to immigration policy does not work and only serves to cause people to be harmed or disappear.

We also believe that the massive funds that go towards border security should be used to invest in communities and addressing the root causes that are compelling people to flee countries of origin, many of which have to do with U.S. disruption and interference in foreign economies and things like U.S. participation in the drug war. We’d like to see those funds used to address social and economic issues that push people to migrate in the first place.