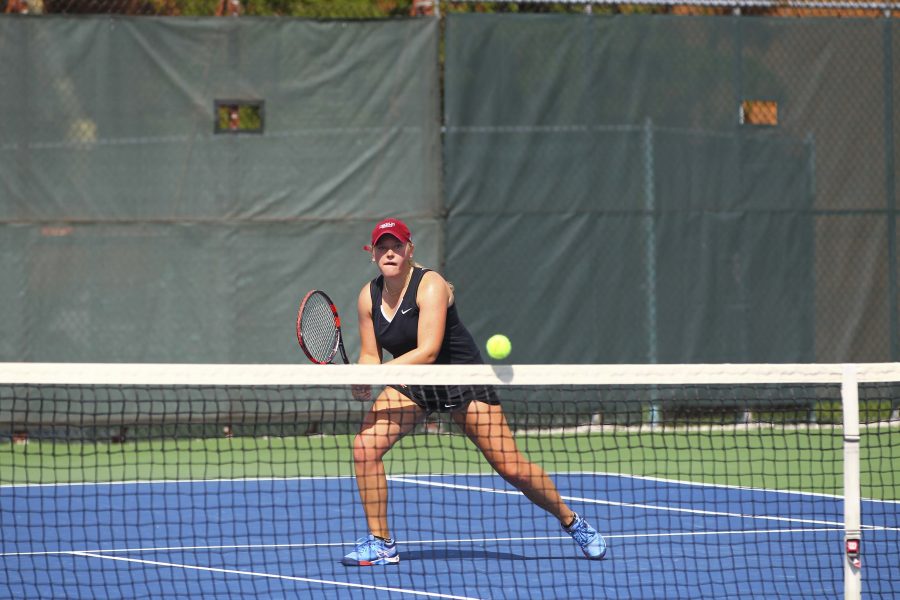 Junior Sarah Hughes closes in on the net, eyeing a low forehand volley. After a 4–0 weekend in which she earned wins over Centre College and DePauw University at the No. 1 spot in both singles and doubles, Hughes was named North Coast Athletic Conference Player of the Week.

In a tough loss to the No. 25 DePauw University Tigers, the Yeowomen fell 6–3 Sunday to the rival who bested them last year in the North Coast Athletic Conference Tournament third-place match, the last match of the 2015-16 season. The loss came a day after a victory over the Centre College Colonels, which helped the Yeowomen protect their number 40 national rank. Head Coach Constantine Ananiadis said Oberlin fell just short of DePauw on the Tigers’ home courts.

“Our game plan was to come out with a lot of energy against DePauw,” Ananiadis said. “We knew we were as skilled as they are; it was just a matter of elevating our intensity from the day before [against Centre]. We needed to execute better at crucial moments.”

Oberlin started the weekend with a key non-conference matchup against Centre College. Both teams were relatively evenly matched and the Yeowomen knew that a victory would help them maintain their national ranking.

To start off the match, doubles was closely contested on all three courts. Centre fought off fatigue in their third match of the weekend, while the Yeowomen struggled to adjust to foreign conditions at DePauw’s courts. Oberlin had not played an away match in three weeks.

Still, the Yeowomen managed to notch the first victory of the day as first-year Rainie Heck and senior captain Olivia Hay were victorious at No. 3 doubles. At No. 2, juniors Jackie McDermott and Mayada Audeh seemed to be down for the count, trailing 6–2 before they rallied to win five straight games. Up 7–6, the juniors then failed to convert on several match points and eventually fell in a tiebreak 9–8(5).

All eyes then turned to Court 1, where the duo of junior Sarah Hughes and senior Emma Brezel were locked in a tiebreak. The upperclassmen were a bit off their game, struggling to finish at the net, but still managed to secure their fifth consecutive victory of the season at the first flight. Hughes said she and her teammates have made it a goal to pull out wins even when they aren’t playing their best.

“Although I individually didn’t feel that I played well during my matches this weekend, I felt that I competed well and played with a lot of energy,” Hughes said. “Winning ugly is sometimes necessary… [so] I am happy that I played with a gritty mindset. My team definitely helped shape my mindset and approach as we were all super pumped up to play and grateful to be there.”

Hughes’ and Brezel’s win marked a pivotal moment in the match, putting Oberlin ahead 2–1 at the start of singles. Despite Oberlin’s lead, the match was precarious throughout singles play.

Mayada Audeh put Oberlin up 3–1, coming off the court quickly after an easy 6–1, 6–2 finish. After first-year Rainie Heck contributed a win, four Yeowomen remained on court as the match hung in the balance. Oberlin needed to secure one more win to earn five points and clinch the match.

On Court 2, Emma Brezel dropped a straight set bout 7–6(4), 6–1. The Yeowomen looked on in suspense as Hughes, first-year Delaney Black and McDermott all fought through third sets. The decisive win came on Court 5, as McDermott battled through long baseline points to seal a third set victory 6–3, 3–6, 6–3. Hughes earned the team’s final point with a 3–6, 7–5, 6–3 comeback win.

At the end of a successful day against the Colonels, which dragged on into the evening, the Yeowomen had little time to recharge for their match against the 25th ranked Tigers the next morning at 9:30 a.m.

Doubles got off to a slow start for the Yeowomen, as first-years Lena Rich and Black fell by a decisive 8–3 mark in their first-ever match as a doubles pair. Rich, however, said she looks forward to more bouts with a fellow rookie partner.

“I love playing with Delaney,” Rich said. “We both love to serve big or try to serve big, but on my end it wasn’t working that match. We are still working out some kinks… but I’m really excited to play with her and I think that with just a few more reps, we’ll definitely get into a good groove.”

Hughes and Brezel had another successful showing, securing an 8–4 win, but an 8–6 loss for Hay and Audeh at No. 2 put the Yeowomen down 2–1 at the doubles break.

In singles play, the Yeowomen earned just two points in the one and five spots. McDermott once again added to the squad’s tally as she dropped the first set but came back and outlasted her opponent in the third.

A win over DePauw’s 20th-ranked player in the region, Gretchen Wilder, marked Hughes’s fourth victory of the weekend at No. 1. Hughes’ dominance earned her NCAC Player of the Week honors.

The longest battle was fought by Audeh at the No. 3 spot. Audeh dropped the first set and won the second but couldn’t keep up the momentum, falling 6–4 in a lengthy third set.

The Tigers topped the Yeowomen by a final score of 6–3.

While teams like DePauw have played just three or four matches this season, Ananiadis pointed out that his team has already played eight matches this spring. In order to fight off mid-season fatigue, the squad will focus on strength and conditioning in the coming days until they return to action March 12, taking on the John Carroll University Blue Streaks next Sunday at noon in Philips gym.

Reflecting on the weekend, Hughes said she is optimistic about what lies ahead.

“This weekend definitely made me more excited to see what we can do with the rest of the season,” she said.