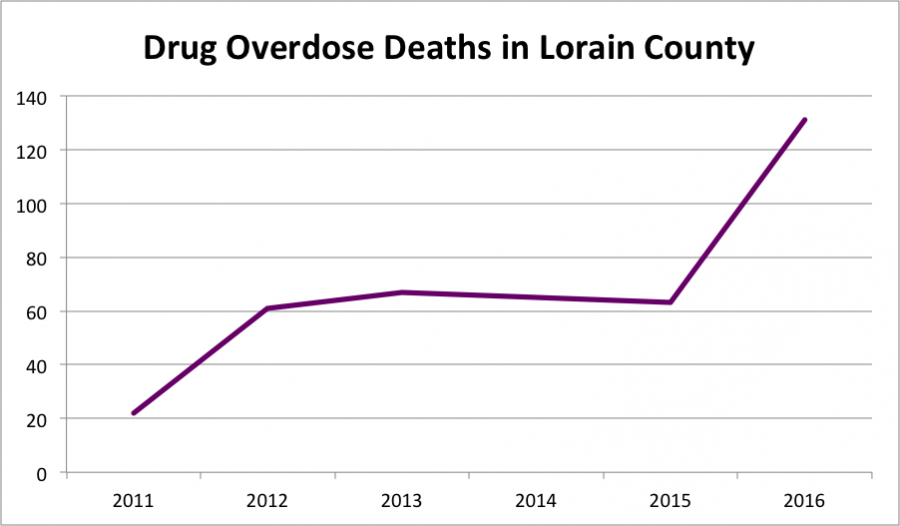 Once a secondary concern to police and anti-drug activists in the region, heroin addiction in Lorain County is reaching record highs. Now, local law enforcement is grappling with the devastating consequences of addiction and increasing rate of overdoses.

Oberlin Interim Police Chief Michael McCloskey said he noticed an influx of heroin overdoses beginning in the early 2000s and exploding in recent years, especially in the county at large.

“We’ve been touched by [heroin addiction] in Oberlin as well,” McCloskey said. “Maybe not on the same level as some of the larger jurisdictions like Elyria or Lorain, but we have seen it here locally.”

Lorain County’s 63 various drug overdose deaths in 2015 more than doubled to 131 in 2016, according to Lorain County Coroner Stephen Evans.

“In the 1990s, companies came out with OxyContin and then went to the government to convince them that these opiates in pill form were safe and non-addicting and that doctors were under-prescribing pain medicine,” Evans said. “Then the government said [it] would rate doctors based on how well they reduce patients’ pain. Your compensation was based off of the patient’s satisfaction surveys and led to them administering more pills.”

After recognizing this issue, Evans said the government pulled back on drug prescriptions when addiction increased, leaving people who were addicted without a financially viable alternative to prescription opiates like oxycodone. Heroin provided a cheap substitute.

“They’ve been pulling back since then, keeping track of doctors running the ‘pill mill,’ doctors freely prescribing narcotics,” Evans said. “But now we have a population still addicted but they can’t find the pills, whereas heroin is cheap and readily available.”

There is no drug treatment center in Oberlin or in Lorain County, although residents had the chance to approve one. Issue 35, had it been approved in November, would have added a drug rehabilitation clinic as well as increased resources for addicts in the county. e initiative was rejected after losing by approximately 12,000 votes.

According to McCloskey, Mercy Allen Hospital and all police responding to overdoses are given Narcan, a medicine introduced in 2012 that is administered nasally to negate drug overdose effects.

College senior Dana Kurzer-Yashin has been pushing for the College to equip Safety and Security Officers with Narcan since last spring, but said legal technicalities have made it hard to do so.

“It’s a weird time right now because a lot of policies surrounding Narcan are shifting,” she said. “In some states, you can get it without a prescription, so there were some delays waiting to see what would happen.”

Although Kurzer-Yashin has been working with Dean of Students and Vice President Meredith Raimondo to make it happen, she is unsure when the plan might be implemented, since administering medicine can be restricted to medical personnel and law enforcement.

“It’s looking like a possibility, but there are liability issues because Safety and Security officers aren’t sworn law enforcers like police, who are protected by certain laws,” Kurzer-Yashin added. “The Safety and Security officers aren’t protected by those laws or by Good Samaritan laws, which protect civilians, because they’re technically contracted.”

Even though some drug users are put on trial for possession, McCloskey said responding to overdoses is treated first as a health issue, instead of a criminal offense.

“From a law-enforcement perspective, there’s a movement to treat responses to heroin overdoses … as more of a community health issue rather than an enforcement issue,” McCloskey said. “Generally, if we’re responding to a complaint that somebody had overdosed, our primary concern is obviously responding to their medical needs.”

On the other hand, McCloskey added that he thinks it can be useful to charge drug users sometimes, as it could force them to get mandatory drug counseling or treatment as part of probation agreements. The rise in users has a doubly negative impact McCloskey said, citing an increase in thefts committed by friends and family of addicts to pay for heroin.

“We’ve also seen an uptick in property crimes attributed to the heroin problem,” McCloskey said. “We’ve arrested shoplifters and they’ve admitted their actions were an attempt to support a heroin addict. They might be walking out of Walmart with a at screen TV to pawn in an effort to purchase narcotics.”

McCloskey added that while his department would continue to investigate dealers, education could be more important as a long-term fix.

“Outside from law enforcement stopping the sale of heroin, I think education has played a large role,” McCloskey said. “Educating the public of its dangers and the law enforcement about identifying it and what they can do are all really important things.”