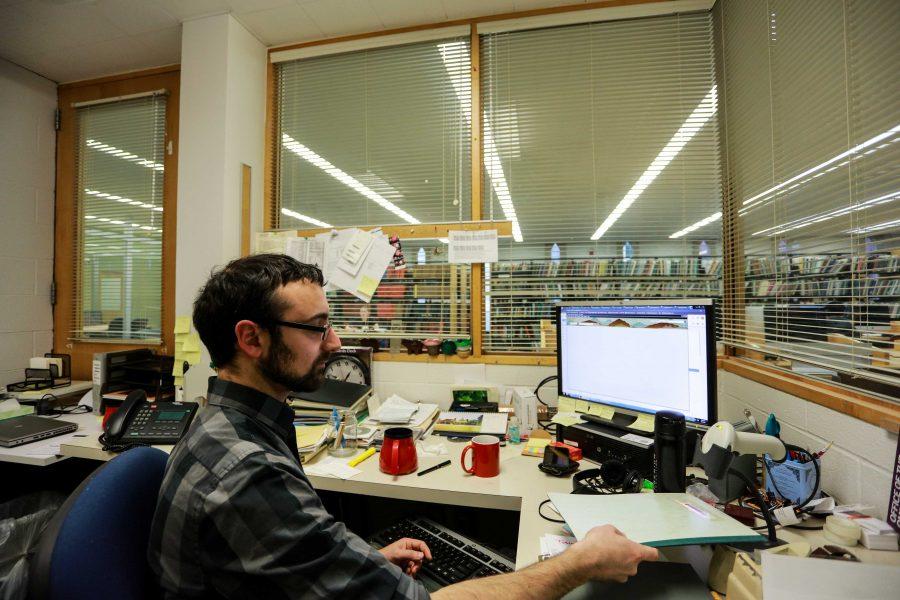 Circulation Coordinator and OCOPE member Greg Solow works at his computer in the Conservatory Library. OCOPE recently filed charges against the College on the basis that it violated their collective bargaining agreement.

Oberlin College Offices and Profession Employees filed a charge of unfair labor practices against the College with the National Labor Relations Board Feb. 21, specifying that the College failed to abide by its collective bargaining contract with the union.

The charge specifically refers to the College’s refusal to release information relating to OCOPE’s employees and their job descriptions, information necessary for the union’s ability to advocate for its members, according to OCOPE President Tracy Tucker.

At the end of last year, the College implemented the Voluntary Separation Incentive Program, a campus-wide buyout program that resulted in the departures of 32 OCOPE members and eliminated a number of their former positions. In January, the College eliminated four additional OCOPE positions.

During the implementation of VSIP, a task force was arranged, in part to ensure that the bargaining agreement between OCOPE and the College was upheld. The task force consisted of Vice President of Finance and Administration Mike Frandsen, Dean of the College of Arts and Sciences Tim Elgren, three faculty members and two OCOPE members — one of whom was Tucker. However, Tucker said that the elimination of positions without the input or involvement of the OCOPE representatives pushed them to file charges against the College with the NLRB.

Elgren previously confirmed that he was the one who ultimately made the final position eliminations.

“The final model emerged from this broad consultation with the task force and discussions with me,” Elgren said to the Review last month (Administrators, Unions at Odds on Cuts, Feb. 10, 2017). “The final decision on the restructuring model was mine.”

Both Frandsen and Elgren declined to comment on OCOPE’s charges.

Vice President and Dean of Students Meredith Raimondo, who was not involved in the task force, said Frandsen and Elgren could not comment for confidentiality reasons.

“The offices that are directly involved probably cannot talk on it,” Raimondo said. “It’s often the case with collective bargaining that there’s an expectation … that you’re not supposed to try to use external influence. … That’s what the purpose of confidentiality is, to make sure that it’s the process itself where the determination is made because it has rules and trained people.”

Raimondo added that while she does not know how the College intends on responding to the charges, she and other administrators work to uphold the provisions of the collective bargaining contract.

“The College is committed to honoring the terms of its collective bargaining agreements, including their resolution processes,” Raimondo wrote in an email to the Review. “The College also respects any other rights afforded to employees, including members of collective bargaining agreements, to utilize the external grievance process available to them.”

While Frandsen and Elgren have not released a response outlining the reasons for their actions, Raimondo added that the decisions were probably made in an effort to address budgetary concerns.

“The College is looking to control the costs of an Oberlin education, which includes looking at what we spend on all employee groups — faculty, administrators, union members — because we all know that tuition can’t continue to rise at the rate at which it’s risen,” she said. “There’s really an across the board effort to think about how we structure the workforce here at Oberlin. I imagine that this is part of how this came to be.”

Meanwhile, Tucker said that the administration’s decision shows a disparity between them and the rest of the College community.

“When you give the data to number-crunchers, they’re only seeing the data,” Tucker said. “They’re not seeing the loyalty or the years spent working here. It’s the administration that’s the problem. It’s running the college more like a corporate place than ever before.”

Tucker pointed to the administration’s business-like way of running the College as a concern for her and others beyond OCOPE who will be affected.

“The decisions the Dean’s Office has made not only affected OCOPE members,” she wrote in an email to the Review. “The administration has taken a very corporate approach to things without taking into consideration the full impact on the employees, students and faculty. This is not the ‘Oberlin way.’ We are more than just data on a piece of paper.”

Tucker said that the taskforce meetings made it clear that the administrators were not at all familiar with the content of the contract.

“The administration wanted their restructuring changes effective within a week,” she said. “But the contract requires a 45-day notice to employees to changes or eliminations of their positions. Otherwise, they have to be paid a day’s wage for every day less than those 45. So the college decided to give them those 45 days. They obviously didn’t know what the requirements of the contract were.”

It is unclear how the charges with the NLRB will play out, but Tucker said she would be unsurprised to see more similar cuts in the future.

“[The thing I want to see most moving forward is] respect,” she said. “Human Resources has always handled job vacancies, job descriptions, appointment letters, etc. Now, the dean’s office is micromanaging these duties and in doing so causing delays and multiple errors. HR has been stripped of their authority on many levels. It wasn’t this way years ago. Responsibility for managing employees needs to be returned to the department that knows what they are doing.”