On the Record with Edward Hummingbird 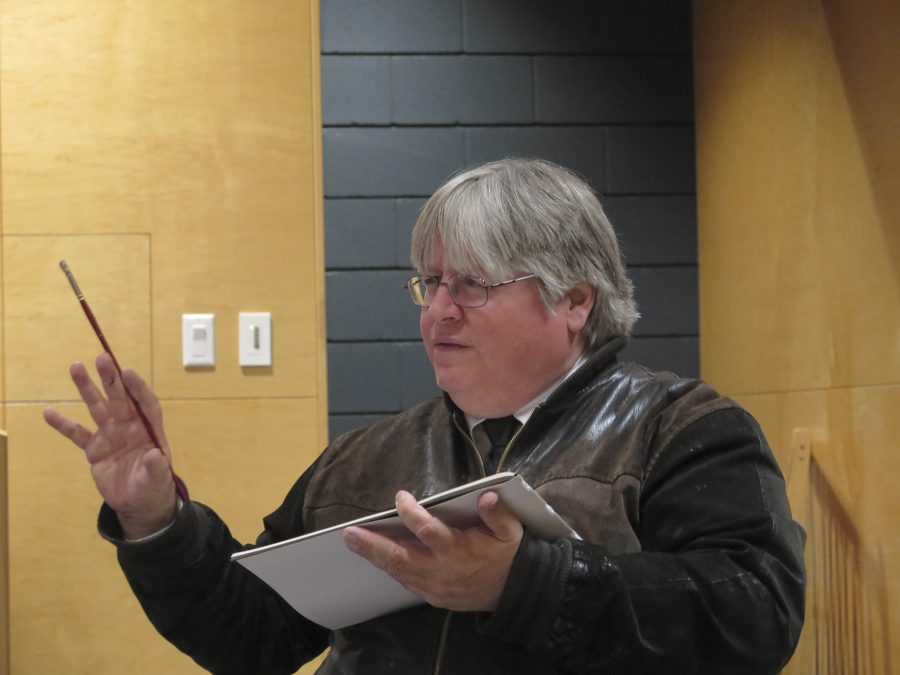 Edward Hummingbird, director of Institutional Research and Planning at the Southwest Indian Polytechnic Institute, who delivers a talk Wednesday in conjunction with AMAM exhibition Exploring Reciprocity: The Power of Animals in Non-Western Art

Edward Hummingbird, a Cherokee from Oklahoma, was in Oberlin from Tuesday to Thursday this week to give lectures and a demonstration on Native art. Hummingbird currently serves as the Director of Institutional Research, Effectiveness and Planning at the Southwest Indian Polytechnic Institute in Albuquerque, NM. In addition to his administrative role, Hummingbird is passionate about education, and often speaks about the diffusion of Native knowledge into the American mainstream. Sponsored by the Environmental Studies, Biology and Art History departments, the Allen Memorial Art Museum, the Ellen Johnson Endowment to Contemporary Art and Baldwin Art Lectures Endowment, Hummingbird’s visit included a lecture to the Environmental Studies 201 course, a public lecture in the Arts Building and a painting demonstration in the Adam Joseph Lewis Center for Environmental Studies’ Hallock Auditorium.

Is the Southwest Indian Polytechnic Institute unique in that it is one of few colleges federally operated by the Bureau of Indian Affairs?

The Bureau of Indian Affairs and the Bureau of Indian Education operate 183 elementary and secondary schools and then two post-secondary schools. Of the 33 [accredited] tribal colleges, only three are multi-tribal institutions. Southwest Indian Polytechnic Institute is one of two national American Indian colleges. We have students from all parts of the country represented at our school, but most come from Arizona and New Mexico. I moved to Albuquerque … to work for the Southwest Indian Polytechnic Institute in 2011, to help them regain their recently lost accreditation status. We tore down and rebuilt the institution — not physically, but to completely re-do things in a way more consistent with higher education. We wanted to go from a government bureau that happened to be in higher education, to a higher education institution that happens to be a part of the government. I think we have made tremendous progress, and we regained accreditation in 2014. It was an honor and privilege to be a part of the process of re-accrediting the school because it doesn’t happen often. When schools lose accreditation, [they] usually close their doors not too long afterwards. We have an open door policy, meaning all American Indian students are welcome and we have chosen to take them on regardless of where they fall on the education spectrum. In spite of the fact that many of them are not college-ready, we have chosen to take them on. Their success is our responsibility. It is a challenge, but I think it’s a worthwhile challenge.

You are currently living in New Mexico. As a Cherokee Indian, has your identity changed at all since leaving Cherokee land in Oklahoma?

It increasingly becomes a question of how I define my cultural identity. When you grow up in Cherokee country, you grow up a member of the Aniyun-wiya, the real people, [or] the only people, and it’s very ethnocentric. When you leave that area you begin to develop an appreciation for other Indigenous cultures, and the frame of reference shifts. For me, [in going from] identifying with the Cherokee experience to identifying with the broader American Indian experience, I have developed an appreciation of the clan systems and social systems of the Southwest tribes. They are very different from us but in some ways similar. I appreciate the similarities by nature, but you really appreciate the differences because it helps you better understand what it means to be an American Indian, not just a Cherokee from Oklahoma.

In your lecture on Native American art and conceptions of the environment you spoke extensively about the life cycle of stories. Stories and histories inevitably have a beginning, middle and end. Given your position that stories naturally die out as generations pass away, what do you think of cultural revitalization efforts that seek to preserve histories and cultures when they are vanishing?

At the heart of culture are sets of values, beliefs and convictions that have withstood the test of time [and] been around for centuries that allowed Indigenous people to live on this continent in relative peace, harmony and equilibrium for thousands of years. This reminds me of a story about visitors from Germany to my old gallery in Dallas, Texas. The German tourists told me they were “interested in seeing what you are doing in Native America because we believe that those values [and] beliefs that have allowed you all to live in a relatively steady state for centuries are ultimately the values and beliefs that are going to let us save ourselves from ourselves.”

Diffusion into the mainstream is kind of a scary thing, but what is truly scary is that the diffusion could occur without ever making a difference on the mainstream that we are diffusing into. There are Cherokee beliefs and values that need to be heard. There are tribal values and beliefs from all over Native America that hold immense value and helped us achieve and maintain a steady state for centuries. What concerns me is that in the future there might come a time when maybe there is not a single Cherokee left and the culture is completely diffused. If that happens, that is just part of a natural cycle, but what does concern [me] is the thought of that happening with never having the impact that we could and we should on the mainstream. There is a lot that Indigenous America has to teach the mainstream if we are willing to teach and others are willing to listen.

What insights can non-Natives take away from viewing American Indian art forms that depict the natural world?

As you stated in your lecture, there is an inexorable link between Native culture, fauna and flora — is there any precedent in American Indian art to use art forms as a medium of awareness or concern for global climate change?

Yes! It’s one of the purposes of art to better understand our place in the world. There are many American Indian artists who are trying to raise cultural awareness of critical issues. Jaune Quick-To-See Smith is an artist who looks at the impact that technology has on the cultures, resources and the [impact] exploitation of resources will have on tribes. One thing American Indians are passionate about is the environment, and art is a form to make their statements and have their voices heard. It is an important motif of contemporary American Indian art. American Indian artists are very socially conscious and at times incredibly deep thinkers.