In The Locker Room with Women’s Track and Field 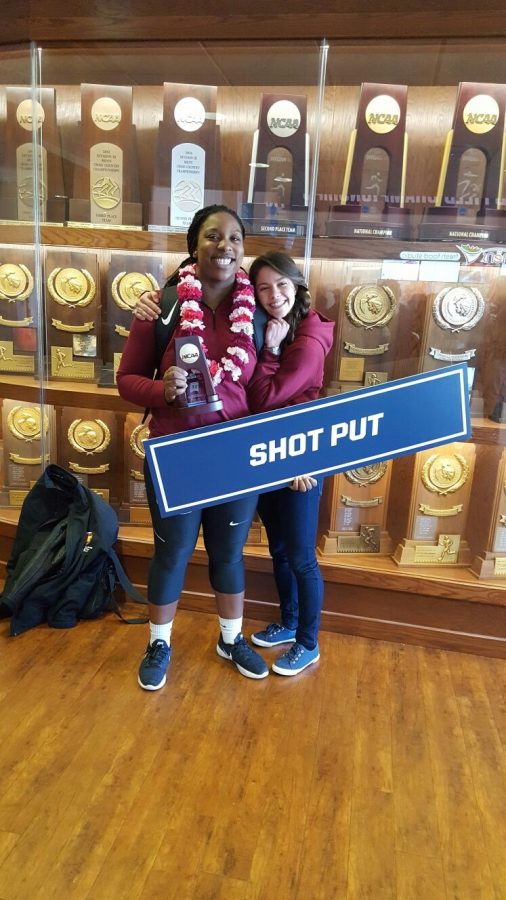 In The Locker Room with Lilah Drafts-Johnson and Monique Newton

This week, the Review sat down with junior sprinter/jumper Lilah Drafts-Johnson and junior thrower Monique Newton to talk about the women’s team’s first outright conference championship in school history, the duo’s experiences competing at Nationals and their expectations for the outdoor season. In the NCAA Division III Indoor Championship, Newton shattered records across the board, placing first in the nation at shot put and becoming the first female NCAA champion in Oberlin College history. On the track, Drafts-Johnson had a breakout season this winter, winning North Coast Athletic Conference Runner of the Year and breaking two school records.

What did it mean to be on the first women’s team in Oberlin College history to outright win the indoor conference championship this season?

Lilah Drafts-Johnson: This summer, Monique [Newton] sent me a Snapchat of the banner in the athletic doorway to Philips gym and she wrote, “2017 Conference Champions.” I saved it because I was like “Yeah, we are going to do it.” Coming in as freshmen, we were always second to Ohio Wesleyan University, and that was the natural order. To beat them on our home turf was this huge display of force, talent and ability.

Monique Newton: This was a goal we had set since the ending of last year. People in my year, we have come second to OWU every single season, indoor and outdoor. To get over the hump and actually do it was a really good feeling. I haven’t really thought about it a lot, but I’m sure it’ll be something pretty cool 10 years from now.

How was your experience competing at Nationals?

LDJ: It’s really exciting to go to the track and see all of these other athletes competing and knowing that they have all gone through the same experience of working very hard to get to that point. For me, it was exciting because it was my first time going as an indoor qualifier. It’s also a really nice way to put a bookend on the season.

What did it feel like to earn the national championship in the shot put?

MN: It still hasn’t really sunken in. Winning indoor conference, that was the goal this year. Last year, I finished second and was close but not quite there. This year, trying to figure out how to get over that hump, putting everything together at the right time and learning from the past to accomplish my goal was very special. I knew I was the first female in program history [to win an individual national championship]. I didn’t know I was the first female ever until after, so that was awesome. It was a great ending to a great season.

How important was the support of your teammates and coaches in helping you to the national stage?

LDJ: The support is really important. The best race that I ran indoors was my leg of the 4×400 [meter relay] for conference, and that’s the fastest time I split because everyone was cheering so hard. I feel like my nationals race I struggled because I didn’t have those same good vibes in the center. … My coach, Alisha Samuel, has put so much energy into my training the past two years, I want her to get that recognition and get that respect. If my success can help in some way, I want to do that.

MN: There’s not a moment when I ever feel it’s just me or when I’m alone. I feel like I’ll always have my teammates in my corner, and they are pushing me on days I might not be feeling well or days I might not be as motivated. That’s the stuff that people don’t really talk about, but it’s just as important as the individual accomplishments.

You were both recently given NCAC of the Week honors for your first outdoor meet at Emory University. What does that accolade mean to you?

LDJ: We had a really great training week at Emory University. The weather was great. The team was really supportive, and I was very happy with my first race. It was a smooth transition, and that was the plan.

MN: We had a great indoor season, and we are trying to carry the momentum outdoors. This is probably the best start to a season, distance-wise, that I’ve ever had, which is encouraging. At this time of year, it’s easy to burn out, which is something we are trying to not let happen.

What are your personal and team goals for the outdoor season?

LDJ: It would be really cool to be the second female champion in Oberlin’s history. At the very least, I know that I want to do better than I did at nationals last year and I placed seventh. I just feel really good about this year and this season. I think our team is ready to get its first-ever outdoor championship. At the nationals level, the outdoor squad that we can bring could really do some damage. We could probably finish in the top 15 at the very least.

MN: The indoor season is a hard act to follow up, so we are going to try to win outdoor conference as a team. As Lilah said, as a team, we are going to try to do some damage at nationals. Individually, it would be really cool to win outdoor shot put. I think I’ll have a chance to do it in discus and be an All-American in the hammer throw. If I walk out with three All-American trophies, a couple of national titles, a conference title and we finish in the top three as a team at outdoor nationals, that would be pretty peachy.