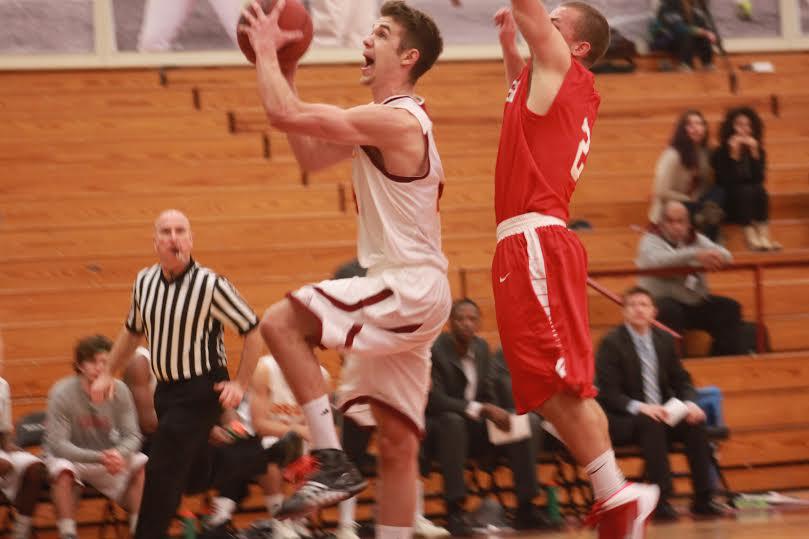 Senior Geoff Simpson jumps up to shoot the ball. The Yeomen turned their losing record around by defeating the Wabash College Little Giants on Saturday.

After losing four straight conference games, the Oberlin men’s basketball team finally eked out a win in its fifth conference match against the Wabash College Little Giants on Saturday, Dec. 7. The 79–62 home victory sparked new hope for the Yeomen, who are currently 3–7 overall and 1–4 in conference play.

The Yeomen were coming off a devastating one-point loss against the Kenyon College Lords, but they refused to accept that same fate on Saturday. In the contest against Wabash, the Yeomen came out strong and pulled ahead with a series of impressive plays.

“There was a run in the middle of the first half where we had a string of steals and it led to a bunch of fast-break points,” Head Coach Isaiah Cavaco said. The Yeomen left the Little Giants feeling small as they cruised to a 44–21 lead at halftime.

With over 100 fans in attendance, the team put on a good show well into the second half. This was the first time that Oberlin had defeated Wabash in conference play since 2006.

Cavaco attributed the team’s success this weekend to a sharper game mentality going into the event.

“I think the game was definitely faster. We picked up the tempo a little bit and it allowed our guards to be more disruptive than they have been in the past few games,” he said.

Senior captain and guard-forward Geoff Simpson tallied 18 points, bolstering his average points per game to 16.2 this season. The Simsbury, CT, native earned most of his points from free throws in the physical matchup, going 11 of 12 from the foul line.

Reflecting on the win, Ollie said, “I think that our win against Wabash definitely sets a high standard for the rest of the season — but I think that from the start of the season, everybody on the team already knew that we could have a great year. We just have to take it one game at time.”

Freshman Nathan Cohen also started the game for the Yeomen and racked up 11 of his 14 total points in the first half. Cohen played 31 minutes in the game, the most he’s been on the court in his Oberlin career. Fellow first-year Jack Poyle came off the bench to provide much-needed energy for the team as he tallied 16 points on 6 of 10 shooting.

“I think it’s great that Nate and Jack played so well Saturday and have been having great freshman seasons. The prospect of playing with them for at least two more seasons is really exciting, and I think that their skill and the talent of the freshman class as a whole is a testament to the great job that our coaching staff does at recruiting,” said Ollie.

With the win under their belt, Cavaco believes there is only room to improve.

“We are learning a bit more at what we’re good at, and that will help us a lot as we hit second semester,” he said.

Sophomore Matthew Walker agreed with Cavaco. “Our conference is one of the toughest in the nation, and I think if we continue to play hard and smart then we should eventually be at the top of it,” he said.

The team will have a break from conference play until it faces the Denison University Big Red in an away match on Wednesday, Jan. 8.