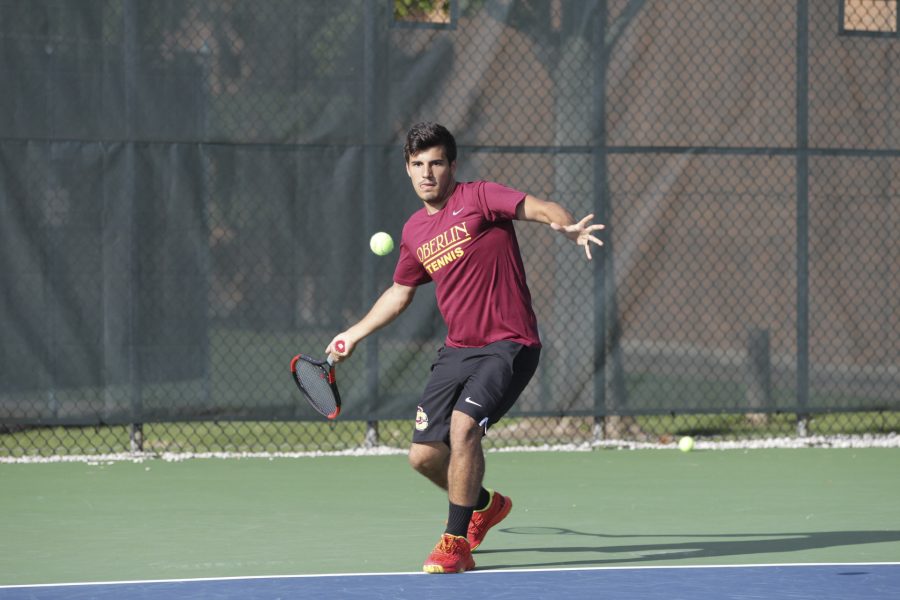 Senior Paul Farah eyes a forehand. The Yeomen finished their spring trip to Hilton Head, SC with a perfect 5–0 record.

Riding an eight-match win streak, men’s tennis earned its first North Coast Athletic Conference victory with an 8–1 win over the Ohio Wesleyan University Battling Bishops Saturday. The Yeomen posted five non-conference victories during their spring break trip in the beach-front town of Hilton Head, SC, moving their overall record to 10–5. Junior Michael Drougas said the team is motivated to maintain that momentum as it looks ahead to the rest of conference play.

“I think and hope our expectations are to continue winning matches like we have been doing,” he said. “We know that in order to do that, we must continue to improve because the competition will only get tougher.”

OWU presented a challenge for Oberlin in doubles, as No. 1 and No. 3 doubles were both tight battles. But Oberlin staved off the pressure and swept doubles play. The first flight senior duo of Ian Paik and Jeremy Lichtmacher pushed past their OWU opponents 8–6. At the second and third spots, Head Coach Eric Ishida paired youth and experience to find success. Junior Michael Drougas and first-year Stephen Gruppuso handled their OWU opponents 8–4 at No. 2, while first-year Camron Cohen and senior Abraham Davis edged out a 9–7 win at No. 3.

“Doubles was intense on all courts,” Davis said in an email to the Review. “After that, they were really discouraged and tanked a lot of singles matches so our ferocious and fiery start was the key to success.”

The Yeomen won five of the six singles matches. Paik, Drougas and Grupposo earned convincing straight-set victories at the first, third and fourth flights, respectively. Senior Paul Farah also notably pulled out a third-set tiebreaker against his OWU opponent at No. 6, winning 7–5, 4–6, 10–3.

Oberlin’s sole loss came in the second flight when Davis dropped the first set and was unable to pull out a second-set tiebreak, falling 6–3, 7–6 (2). Junior Manickam Manickam said he was proud of the way his team handled an improved OWU squad.

“They were stronger this year than they’ve been in the past,” Manickam said in an email to the Review. “With it being the end of our spring break, we knew we had to come in focused and we did that.”

In the week leading up to the OWU match, the Yeomen dominated spring break competition. Drougas’ success stood out, as the junior went unbeaten in both singles and doubles play. Playing primarily No. 3 singles, he earned five straight wins. The Yeomen also went 4­–0 in doubles, playing with several different partners.

“The goal is to win matches as a team, so I am happy that I have been able to help us do that,” Drougas said. “My teammates work really hard on a consistent basis and it is a good reminder that I need to continue to work hard just like them. Our team is really good, and that pushes me to improve as an individual.”

The closest bout was against Intercollegiate Tennis Association Central Region opponent University of St. Thomas. The Tommies came out strong, surprising the Yeomen by winning two of the three doubles matches. But Oberlin fought back on the singles court and was victorious in five of the six flights.

Paik highlighted singles play at the top of the lineup by knocking off the region’s 25th-ranked singles player, Luke Elifson. First-year Stephen Gruppuso also notched his team-high 11th win against the Tommies.

Ishida said he was pleased to see his team take on players of all levels but still manage to play their own games.

“The main take away is we were able to play at our level regardless of the opponent while finishing matches with intensity, focus and determination,” he said.

The Yeomen now face the most important part of the season with conference matches set to start in the next few weeks. After playing two more tune-up matches against Lewis & Clark College and the University of Rochester today and tomorrow, the Yeomen will travel to Granville, Ohio, next Sunday to take on conference rival Denison University. Manickam said spring break put the team in a good place heading into April.

“Overall, spring break was really good for our team camaraderie,” he said in an email to the Review. “Everyone got to play some tennis and we improved a lot over the course of the week. We gained some confidence and upped the quality of our tennis. That will be important now as we come into the home stretch of our season.”