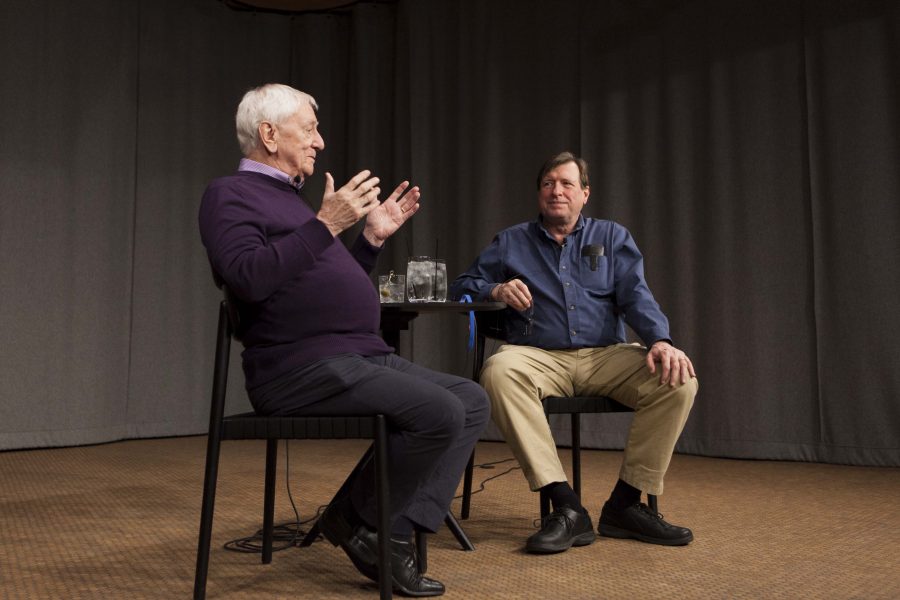 British-American composer Bernard Rands gives a talk on the current state of contemporary classical music Tuesday at The Birenbaum.

The recently set concrete walls of the Birenbaum Innovation and Performance Space accommodated musicians and music enthusiasts Tuesday evening for a talk on contemporary classical music, given by British-American composer Bernard Rands. The room buzzed as people filed in, and quiet conversation pervaded the space as people eagerly waited for Rands to begin. Titled “State of the Art,” the event was a discussion and question-and-answer session that dove into the trends and trajectory of contemporary music written in the Western Classical tradition, an area Rands knows well after having studied composition with such well-known artists as Pierre Boulez, Bruno Maderna, Luigi Dallapiccola and Luciano Berio.

Rands spent his early life in Europe surrounded by the seminal figures of mid-20th century avant-garde music. He moved to the United States in 1975 and has lived and composed here ever since. He has been associated with conductors such as Zubin Mehta, who conducted Rands’ 1984 Pulitzer Prize-winning Canti del Sole, Daniel Barenboim and Christoph von Dohnányi.

“The [avant-garde] is in the activity,” Rands said in response to a question from the audience regarding the term’s contemporary applicability, given that the upheavals of the 20th century are behind us. “The meaning is to destroy the status quo.” Rands implied that there is always a spirit of avant-garde, defined by its defiance more than by any particular technique.

“Do I push myself to my limits all the time? Yes,” Rands said of his own work after the event. “So, for myself, I’m avant-garde.”

Moreover, he dismissed the designation of avant-garde as being a particularly important one, saying that it was one of a variety of techniques people use to try to impose their own views on music.

“That’s the wonderful thing about music: Nobody can own it,” Rands said, emphasizing his dissatisfaction with what he called the dogmatic characteristic of certain schools of composition throughout the discussion. Conservatory first-year Kari Watson, who attended, said this sentiment struck her the most.

“This connects to my own ideology of music, that it should be communal,” Watson said.

Another audience member asked Rands about studying in Darmstadt, Germany, with composer Pierre Boulez, a place and person well known for this sort of dogmatism, and whether he ever felt that atmosphere was stifling creatively. Rands replied that Boulez could be very rigid, which could at times be frustrating, but that his particularism was what made his music most recognizable.

However, he did use the 20th-century dismissal of Romanticism as an artifact of yesterday — an idea which Boulez, a dedicated adherent to serialism, subscribed to — as evidence that one can get caught up in one movement to the exclusion of all others. To Rands, there are things that romantics like Tchaikovsky captured that serialism and later movements just couldn’t, and vice versa.

“There are times I hear the last movement of Tchaikovsky’s [sixth symphony] and I think, ‘Eat your heart out, Pierre,’” Rands said.

Watson said she appreciated Rands’ frank anecdotes about his composition teachers. “Sometimes composers like that sit on such a pedestal, but hearing his anecdotes were really humanizing and a healthy reminder that they were just people like the rest of us,” Watson added.

Rands also discussed how Boulez’s conducting showed the character of his music, noting that early in Boulez’s career he sought to separate himself musically from his French forebearers, Claude Debussy and Maurice Ravel. However, by the time of his death, Boulez was perhaps best known for his interpretations of Debussy and Ravel, alongside other early 20th-century composers such as Béla Bartók and Alban Berg.

“When he conducted Debussy and Ravel, it was very penetrative,” Rands said, adding that one could see Boulez “gradually recognize his heritage.”

The theme of recognizing one’s musical heritage pervaded the discussion. “I hope I’m wrong, but among young composers I’ve had the pleasure to be with and teach, there’s not a knowledge that goes back several centuries,” Rands said. He finds this distressing and to an extent symptomatic of the aforementioned musical dogmatism.

Rands particularly warned young composers not to ignore any music. “Until an artist … becomes convinced that they are part of a lineage that is beautiful in all its stages, we cannot produce anything significant,” Rands emphasized.

In parallel, Rands also discussed the importance of staying connected to “vernacular” music — that is, music outside of the Western Classical tradition, such as musical theater or pop music. He said that this sort of connection tends to be strong among composers in the United States. “There is fundamentally, I think, a desire to be as good as Cole Porter,” Rands said of American music, specifically referring to the role of jazz within it. Rands said he will listen to pop music, though certain unnamed musicians chide him for it, as a way of remaining in touch.

Rands said this sort of openness is important as a way to combat musical indoctrination. “The point of any creative activity is to discover who you are,” Rands elaborated. Pop melodies have a way of immediately making sense, and he seeks a similar directness of expression in his own music.

“It’s trying to tap into an aspect of humanity that music represents better than any other phenomenon that I know,” Rands said.

Tonight, the Oberlin Orchestra will present Rands’ English Horn Concerto, which premiered in 2015 by the Cleveland Orchestra. Oberlin Professor of Oboe and English Horn Robert Walters, for whom the piece was written, will play the solo part.

“[The piece] enlarges the capacity for the instrument,” Walters said. “Usually English Horn is typecast into slow, mournful melodies. … My mother used to call it ‘the anguish horn.’”

Walters also praised Rands’ use of the orchestra as a unified whole, a musical dynamic Rands had indicated was very important to him. Walters’ enthusiasm made Rands’ closing remarks from the discussion ring very true.