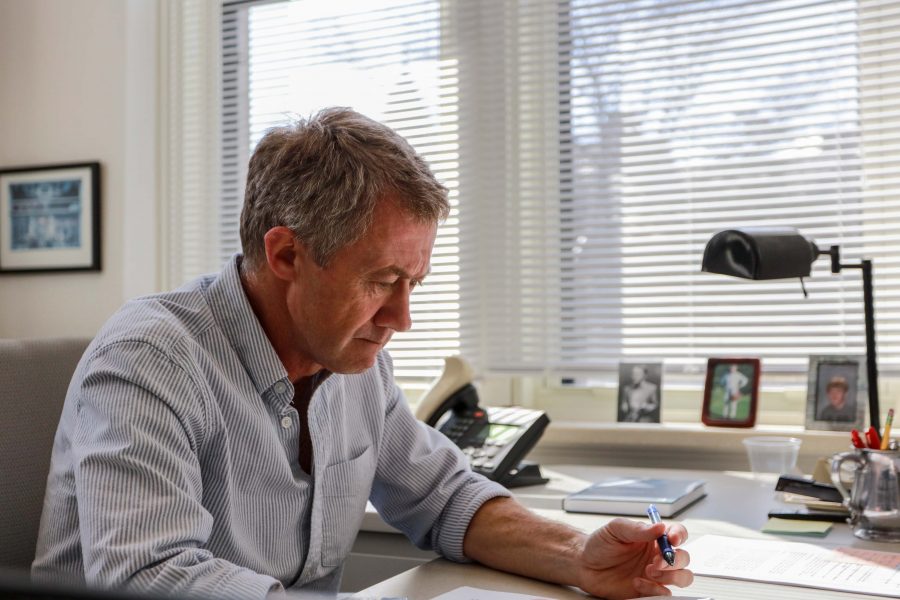 Politics Professor Chris Howell, one of several faculty members who earned Research Status for 2017–2018, works in his o ce in Rice Hall. Administrators announced before spring break that Research Status will be inde nitely suspended after next academic year as a cost-saving measure.

A budgetary move intended to save Oberlin money has indefinitely eliminated funding for the faculty Research Status program. Dean of the College of Arts and Sciences Tim Elgren and Dean of the Conservatory Andrea Kalyn announced the suspension in an email to faculty March 15, a decision they say could save the school approximately $600,000 annually.

Research Status typically compensates five to ten College faculty and one to two Conservatory faculty for a full year of paid sabbatical leave with extraneous stipends for items like travel expenses or research assistance. Though Elgren and Kalyn have already decided to cut the fund, the onus of determining whether to reinstate the program or maintain its discontinuation ultimately falls back on the faculty. The College and Conservatory faculty will meet next Wednesday and Tuesday, April 11, respectively, to discuss the program’s future.

“We wanted to protect faculty from writing proposals, since [Research Status] could potentially get cut,” Elgren said of the announcement, noting that proposals are usually due around this time of year and could ultimately prove moot if the program is officially cut. “The decision to make these kinds of significant budget changes will be done in consultation with the [General Faculty Council, College Faculty Council and Conservatory Faculty Council]. … It will be presented to the entire College faculty, so faculty members will know exactly what we’re talking about, and it will be their opportunity to have input in the prioritization.”

Elgren said that if the faculty decides to reinstate Research Status, deadlines for proposals will be pushed back and administration and faculty will revisit other budget-saving measures. The cut is part of a string of penny-pinching measures taken by the administration this academic year in light of the school’s increasingly strained financial situation. Kalyn portrayed the suspension measure as not an attack on faculty scholarship, but rather an option among many to save money.

“The idea is not to step away from research or not to support research,” Kalyn said. “We do that in a lot of different ways and it’s a huge priority for us. … We need to be looking at this within a larger frame, the ways in which things are interrelated, because if you look at things like this in isolation, this was in no way intended or conceived or considered to be that we aren’t serious about research on campus. But it gets seen as that in isolation, so we really need to be looking at the whole matrix of how we sustain the quality of education that we offer.”

Once a professor earns tenure, they have the choice every six years to take leave with either one semester of full pay or one year with five-ninths pay. Faculty members usually apply for Research Status when they intend on going on sabbatical leave, according to Politics Professor Chris Howell, who was granted status for the 2017–2018 academic year. The administration still plans on honoring the 2017–2018 awards for five College professors, including Howell, and one Conservatory faculty member.

“Each time I’ve had a Research Status leave, I’ve been able to produce a book,” said Howell, who will take his third Research Status leave this fall. “If you teach at a liberal arts college like Oberlin, when you’re teaching, when you’re not on leave, it’s very difficult to get research done because we’re very obviously dedicated to our students. … The result is that it’s very hard to work on a sustained research project.”

“What we model at Oberlin is not just that we transmit knowledge that other people produce,” he said. “As faculty, we don’t just simply take books or articles that other people have written and give them to our students and say, ‘Here’s what’s in them.’ We model scholarship where we produce knowledge, as well as transmit it.”

Chemistry Professor Matthew Elrod said his Research Status in 2010–2011 allowed him to work on two research projects and publish five articles with the help of four students, adding that the suspension could also make it difficult for students to engage in research.

“I feel that Research Status is critical in helping faculty get current projects to publication (which benefits the past and current student co-authors) and in helping faculty launch new research directions (which leads to new opportunities for future students),” Elrod wrote in an email to the Review.

Research Status has also been an important component in Oberlin’s ability to recruit top-tier faculty, according to Howell.

“Our ability to recruit and retain the best faculty in the country, to have the kind of faculty we have here at Oberlin, depends, in part, on our ability to assure those faculty that they can keep their research going,” Howell said. “This is like offering a decent wage or health plan, a sabbatical policy and things like Research Status, money that the College provides for faculty to go to conferences — all of that allows us to go out there and compete for the best young graduate students from the best graduate programs.”

East Asian Studies Professor Ann Sherif is one of the various faculty members concerned with the administration’s decision to suspend Research Status. She said that she has reached out to Elgren and Kalyn in hopes of organizing faculty conversations about addressing budget constraints.

“The first step is to have a discussion among the faculty to determine what is the status of the particular Research Status grants that support faculty research, and whether we as a group of faculty members believe that this is something that the College should protect and devote resources to,” she said.

Sherif continued on to suggest how faculty could contribute to discussions about cost-saving measures, citing alternatives to choosing between complete reinstatement and suspension.

“The teaching staff as a group is eager to contribute to discussions about responsible financial planning and to efforts to ensure the financial sustainability of the College,” Sherif said. “For example, one cost-cutting idea that has been in the air for the past couple years is reducing the number of short-term replacement faculty positions, [such as] visiting professors, who teach while faculty go on sabbatical leave or Research Status. That might be one viable way to save money, but departments and faculty really need to be involved from the inception of such big plans.”

Faculty members are not the only group on campus grappling with how budget cuts might affect them. Oberlin College Office and Professional Employees recently filed an unfair labor complaint with the National Labor Relations Board in light of recent negotiations, according to OCOPE, made with bad-faith bargaining. Campus dining facilities have also undergone closure or curtailed hours, as is the case with the Rathskellar and Decafe.