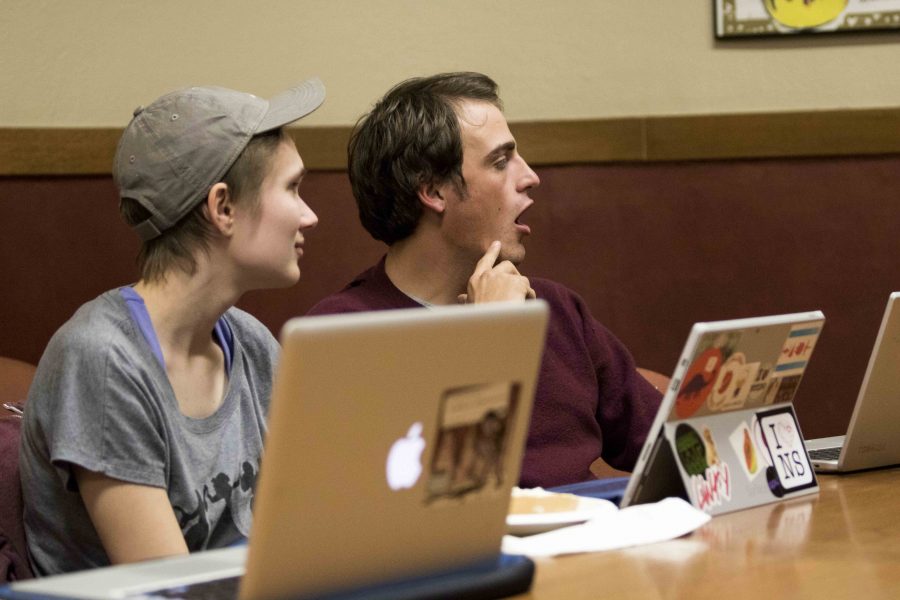 Student Senate chose junior student senators Thobeka Mnisi and Josh Koller to join a five-member taskforce to investigate the merits of adding a student representative to the Board of Trustees. The task force will also include three board members, currently unnamed, and could begin meeting as early as next week.

Mnisi and Koller will discuss the benefits and drawbacks of having a student on the board, hoping to convince trustees of its importance. By the end of the semester, the task force will make a recommendation to the board about whether they should accept students and what role student board members would play. The task force’s approval comes on the heels of Senate’s months-long push for the board to seriously consider student representation.

Koller echoed Mnisi’s sentiments, adding that the long-term benefits of a student representative are invaluable.

“I really see the lasting benefit in a student trustee, and I will fight for that really hard in whatever the most cogent way is,” Koller added.

Senators selected task force members at their weekly plenary meeting Sunday, later passing on notice of the decision to the board’s communication liaison Sandhya Subramanian via email. Though seven senators were originally nominated for the position, sophomores Meg Parker, Elie Small and Kirsten Mojziszek and junior Jesse Docter all withdrew their nominations, leaving Mnisi, Koller and sophomore senator Cecilia Wallace to contend for the two open positions. Docter was also recently selected to replace College junior Monique Newton on the Presidential Search Committee since Newton had to step down because of athletics obligations.

“I just felt that the other candidates were really qualified and deserving, and I’m really excited for the work that they can and will do this module,” Parker said. “I felt that if I was going to put my support behind Thobeka and Josh anyways, that it wasn’t fair for me to also be in the running.”

Koller has been a senator for three semesters, was a member of the student-trustee engagement working group and is Student Financial Committee co-chair. During his candidate speech, he highlighted the vast research he has done around student trustees.

“I was a member of the student-trustee engagement working group, … so I have already had some experience working with trustees,” Koller said. “I have put some time into doing some of this research that was presented to that working group — not really seen — but this is really the place where I think that research will be seen, discussed and need to be presented in a way that makes our best case.”

Mnisi, who serves as Student Senate Chair, has also served on Senate for three semesters, is a member of the Strategic Plan Implementation Committee on Diversity, Equity and Inclusion and was part of the advising task force that helped redesign Oberlin’s advising program.

“When the trustees were here in December, I met a lot of people who gave me their contacts, and I’ve tried to keep in touch and have improved relationships with some of them,” Mnisi said. “I feel like I’m really good at doing that and trying to really build relationships with people so that I can communicate with them in a way that they can hear.”

Dean of Students and Senate Advisor Meredith Raimondo voiced her support for the chosen candidates.

“I am really excited that Thobeka and Josh will be serving as student reps to the task force,” Raimondo wrote in an email to the Review. “Both have shown enormous leadership on Student Senate and demonstrated real ability in navigating institutional structures and collaborating with administrators while clearly and effectively representing student concerns. I feel very confident that they will be able to work effectively with the trustees on the task force, who I know have deep respect for Senate’s recent efforts.”

Although the proposal presented to the board indicated that the task force would be an eight-member group composed of representatives from the administration, faculty, student body and board, upon further discussion the board and student body were determined to be the primary constituencies that needed to be represented, downsizing the group to five members.

“Jesse, Meg and I met with Sandhya last week … to discuss what the composition of the taskforce might look like,” Mnisi said. “Firstly, to discuss whether the trustees would be okay with the task force being just students and trustees because once we thought about it … it didn’t make much sense to have so many different constituencies involved, and the trustees really, really felt like it would be important to the success of the committee.”

Mnisi added that although the taskforce ended up consisting of only trustees and students, she hoped that the group would have been represented by more people.

“They suggested a five-member committee, which was much smaller than what I had expected, but also with only two students and three trustees, which I wasn’t very happy about,” she said. “I didn’t think it was worth us fighting that decision at this point because we don’t want to be giving them more than one thing to say no to and alienating them even before we start the negotiations.”