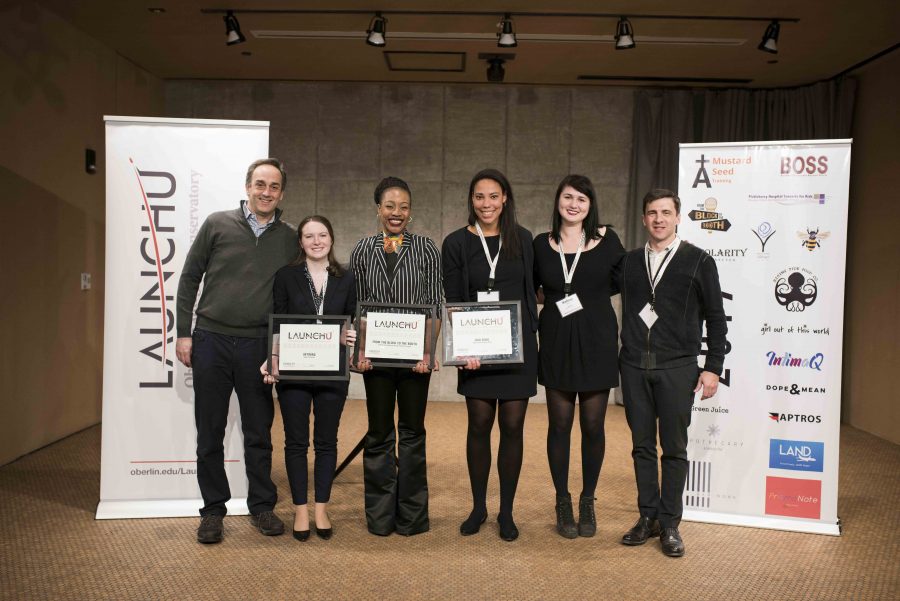 Photo courtesy of Office of Communications

Three business ventures won a combined $45,000 at this month’s LaunchU competition. Since receiving the awards, each venture has taken off and is starting to grow with its newfound funding.

The winning startups were chosen from the nine groups that presented ventures to a panel of judges at the March 4 pitch competition. First place was awarded to Kelsey Scult, OC ’14 and Mary Okoth, OC ’14, second to Conservatory junior Helen Fleischer and third to Sophie Mvurya, OC ’16, earning $20,000, $15,000 and $10,000 for their business ventures, respectively.

Scult and Okoth won the competition with their startup, BAR NONE, a multidisciplinary arts initiative for formerly incarcerated people in New Orleans. The two studied Studio Art at Oberlin and cultivated a passion for prison reform. While they initially looked at BAR NONE as what Scult called a “one-time, multidisciplinary theater production,” they said LaunchU helped them develop BAR NONE into a long-term sustainable business model. Through BAR NONE, Okoth said that formerly incarcerated people can take art classes, display and sell their work, host community art events and participate in paid arts internships.

“In our first year, LaunchU is giving us the capacity to really develop a relationship with the formerly incarcerated community and with the arts community here,” Scult said. “Our LaunchU award is going towards doing a lot of different kinds of classes and events. … Launching into this year, we will be able to do a number of pop-up workshops and collaborations with different re-entry organizations, museums and gallery spaces, that will make us more eligible to apply for a bunch of different grants.”

Some of the different projects they are working on include collaborating with the Newcomb Art Museum at Tulane University to lead an art workshop that will coincide with an upcoming exhibition.

Ultimately, Scult and Okoth said they aim to use BAR NONE to cultivate a sense of community for the formerly incarcerated, who could be at risk of isolation, and address additional issues like inaccessible mental-health care and financial instability.

“One in three prisoners in the U.S. is mentally ill, so, upon release many people have limited access to mental health resources,” Okoth said. “Art therapy has been proven to help people with their emotional regulation and well-being. … Another obstacle is financial stability. The lack of educational opportunities and career advisement in prisons leaves people unprepared for securing employment. Employers can be skeptical about hiring formerly incarcerated people. Given these conditions, many obtain minimum wage jobs which keep them trapped in the cycle of poverty and more likely to return to prison. We hope to give formerly incarcerated people the opportunity to sell their art as a means of supplemental income.”

While Sculty and Okoth work to help the formerly incarcerated folks, Fleischer, who landed second place with her company IntimaQ, will use her business to provide comfortable and affordable daily underwear for trans and gender nonconforming people, as well as for people who prefer underwear “outside of a binary organizational system.”

Some of the key ways in which Fleischer said that her products will serve the transgender community are through the “tucking and packing” functions of the underwear, which Fleisher said are shapewear designs used to help transgender people achieve “a desired visual and physical effect.”

After serving two years as a residential assistant at Baldwin Cottage, the women and trans housing dorm, Fleisher said that she became increasingly invested in LGBTQ rights. However, she noted that until recently, she had only focused on the larger issues of discrimination and justice, not realizing the day-to-day concerns that trans people face and have few resources for, such as comfortable underwear. After researching the matter, she saw an opportunity to expand the limited underwear market for trans people and that existing companies often sell pricier products.

“When I took a step closer to these issues, observing day-to-day problems that my friends, colleagues and residents were encountering, I kind of realized how absurd it is,” Fleischer said. “It kind of had to be right in my face for me to realize that this was a huge problem that was not being addressed. Once I realized that, I did a little research about the existing market and took consumer surveys to gauge demand, and I realized that this was not being addressed and that the demand was exceedingly high.”

With the LaunchU money, Fleischer plans to hire a designer to help draft ideas for her products. She is also looking into different manufacturers to produce those designs. As a junior, Fleischer hopes to use her remaining time at Oberlin to test the waters with her business as it continues to develop, given its prominently open transgender community.

“The trans population is underrepresented and under-researched in total, but even more so as a consumer segment,” she said. “It’s not been approached that way before. There are a few companies, and they’re growing more and more, gearing towards the trans community, but big data firms have not gone there yet. That makes progressing pretty difficult because you don’t know how big your market size is. … I’m hoping to use Oberlin to collect some of that data so the scaling process can be more informed.”

LaunchU granted its final award to Mvurya for her and co-founder Tyrell Carter’s business From The Block to The Booth. The startup is a mobile recording-studio service, which Mvurya hopes will provide clients with “cutting-edge sound quality equipment in an environment that inspires and nurtures their creativity, while enhancing their productivity at their comfort,” calling it the “Uber of recording studios.”

Mvurya said that the music industry’s current structures are decentralizing due to technological advances, making it possible for individual artists to control and own their own art. She wants to use FBB to uplift musicians who wish to produce and record music without having to sign with major record labels, expressing her excitement about her business’ potentiality in light of the evolving music industry.

“The beauty of this venture is that you can morph it and spin it in any direction,” Mvurya wrote in an email to the Review. “Initially we would like to start with recording services and slowly get into branding and promotion, as we do have a mobile studio, then even start TV shows that picks up different artists and features them recording new music for their fans in cool, innovative ways to help them grow their brands and outreach.”