Off the Cuff: Juan Méndez, Professor and Human Rights Activist 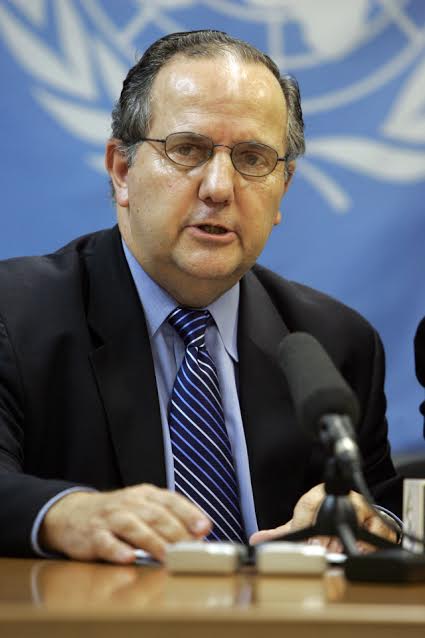 Juan Mendez is a Professor of Human Rights Law at American University’s Washington College of Law who served on the United Nation’s Special Rapporteur on Torture and Other Cruel, Inhuman and Degrading Treatment or Punishment from 2010–2016. Mendez is originally from Argentina, where he defended political prisoners in the 1970s. Following his arrest and subsequent exile from Argentina, Mendez moved to the U.S. where he worked for the Human Rights Watch for 15 years. Mendez gave a talk Wednesday evening in Dye Lecture Hall, discussing controversies surrounding the use and approval of torture in today’s world, specifically, the global war on terror. The talk was part of the “Challenging Borders: Migration, Rights and Security in the 21st Century” lecture series.

How did starting out as a lawyer in Argentina lead to the rest of your career working for human rights?

When I became a lawyer in 1970, the country was undergoing a very hectic and violent time. As a student I’d been interested in politics, and as a young professional I thought I’d use my skills to defend political prisoners. I did, and at that time older lawyers were very prominent, but some of them eventually had to leave the country because [the government] would put bombs in their cars and offices. Then when the military took over, many of them disappeared or went into exile because they were well known. Us younger lawyers were less known, so we could get away with doing work, but almost in a state of clandestinity.

We would meet families of people who had been taken in bars and cafes to tell them what to do as opposed to appearing in court. Sooner or later, we were also targeted and I was arrested, tortured and then held without trial for a year and a half. I was lucky enough that the international treasurer convinced the government to let me go into exile, not released in Argentina. At first I was worried about the friends I had left behind and I campaigned for them. When I eventually got accreditation in the United States, I was lucky to be offered full-time work.

Do you think treatment of migrants has gotten better since you started your career in the 1970s?

No, in fact, with the growth of migration flows the situation has become worse. There are some governments with humane policies toward them. I wouldn’t say they’re welcoming of refugees, asylum seekers or migrants, but at least they organize their inner procedures to give them due process and more humane conditions of detention. For example, in Mexico, conditions are not certainly ideal. But I visited in 2001 and then in 2014, and in both cases I visited immigration detention centers. I found the conditions and treatment had gotten much better since 2001. Mexico has a lot of immigrants in transit. Lately, Mexico has done a big favor to the U.S. by trying to stop these people from coming. They have, for example, a relatively humane facility at the border in the city Guatemala, [Mexico]. In the first few years I visited, that facility was horrible. It used to be really overcrowded, bad sanitation and food, in some cases relatively prolonged detention, and very little fair opportunity for them to state a claim that they can stay. It’s by no means perfect, but it is improved, and from what I can tell there is no torture. Migrants are subject to real cruel treatment when they are on their own, because they are easy prey for organized crime that has taken over illegal transfers between Mexico and the U.S.

Going back to international policies, what are the kind of policies Obama’s administration put in place that Trump could roll back?

Some things he’s already rolled back, which is problematic. He’s authorized the use of secret detention centers again. He’s also issued an executive order that allows for the Pentagon to bring more prisoners to Guantanamo. There haven’t been any new prisoners until well before the Obama administration. They haven’t brought any more, but they’ve authorized it. Those things are bad signs. A worse sign is the things he said during the campaign — that he’d bring back waterboarding and worse, or that he wouldn’t let eggheads tell soldiers they can’t do some things in international war. But it’s difficult to know if this is all just bluster, irresponsible talk, or if it is going to be transferred into policy.

My sense is that the military and CIA are so burned by the practice that they would be reluctant even if it was affordable. Now we have an executive order by Obama and Congress, that torture cannot happen. If Trump orders it, he has to go to Congress and get a new legislation, which I don’t think will happen, they won’t let him. He would have to do it clandestinely, but if he does I’m sure we’ll know. If he does that, the media would make a big deal of it, the ACLU would go to court. That’s why I’m at least halfway optimistic that we can stop him even if Trump wants to do it.

Are there any specific bad policies you worry he could be hoping to implement?

If he thinks waterboarding is OK, he probably thinks that sleep deprivation, constrained postures are OK. The bad thing with these torture methods is that all these things happen simultaneously with the same person. Even if you think one technique isn’t that bad, you have to reckon with the fact that if you do these things repeatedly or in combination it’s torture. What he will try to reinstate I don’t know.

In these war-prisoner situations, are there certain guidelines or preferred methods of interrogation you would be OK with?

My latest thematic report is to propose a universal protocol for interviewing in criminal investigations. We deliberately don’t call it “protocol of interrogation” because I’ve learned that interrogation already has a bad connotation. It’s based on a model that some states have instituted already. Britain, Norway, Holland, Germany, they all have a model of interviewing suspects that doesn’t involve any coercion at all. Instead, it’s based on establishing a rapport with the person, investigating separately to be prepared for the interview, and there’s no torture whatsoever, not even coercion. There’s not even promising, good cop bad cop, and the results are much better. They don’t have unsafe convictions that are overturned because the crime was not true, even if they obtain a confession. And also police bodies are a lot more respectable and respected by the population that supports them and cooperates with them.