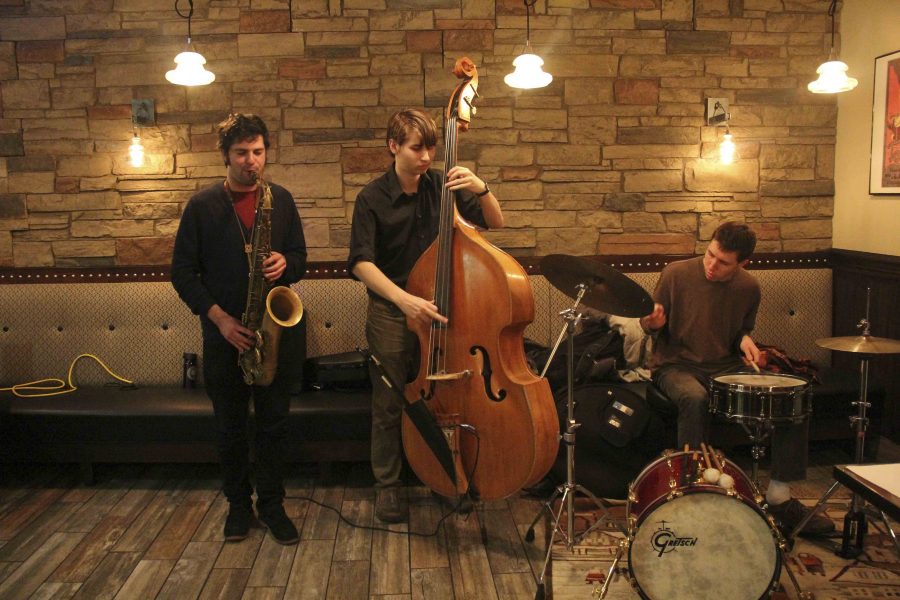 When Conservatory senior Jared Hochberg arrived in Oberlin from Chicago and realized there were few outlets in town for jazz jam sessions, he decided to create one. Jazz Night, now a monthly event at Lorenzo’s Pizzeria, was born. Hochberg plays a 90-minute set with double-degree sophomore Ari Smith and Conservatory sophomore Matthew Frerck to start each show, followed by an improv jam session open to musicians of all skill levels. Four years after establishing the series, Hochberg will perform at his last Jazz Night on May 6.

Hochberg, a Jazz Performance major with a concentration in saxophone, said that the jam sessions he attended prior to coming to Oberlin were integral to his development as a musician.

“I felt that a big part of how you learn to play music is by playing with people much older and better than you [and] being exposed to a wide variety of people and performance experiences,” Hochberg said.

What originally began as a performance opportunity for Hochberg has morphed into a more inclusive, communal night, where Conservatory and College musicians can play with community members of all ages, including jazz students from Oberlin High School.

“The music is not the important aspect,” Hochberg said. “[It’s] just the tool so 40 people can come to the room and feel connected to each other. … [Originally] we played jazz songs, and you needed knowledge of jazz to play, modeling the Chicago jam sessions. Now, the people who attend might not even play music. It’s really more [a] community night — even if you only know how to play one note on your instrument, it’s really not about musical excellence.”

Since returning home from his restaurants in New York City to take over the family business from his father last March, Lorenzo’s owner Michael Cariglio has grown fond of Jazz Night. He sees it as part of a larger effort to increase student patronage at the restaurant.

“We’re just starting social media outreach to share posts and events like Jazz Night and [have added] new items, … appetizers [and] craft beers,” Cariglio said. “We’re next to a very cool college. [Jazz Night is] a way I can get some of the college students here to eat, [and] of course I would totally be down for a younger crowd to come down here and play to help out the community [and] help out the college.”

In addition to being a boon for Lorenzo’s, Jazz Night intentionally pushes back against a jazz scene that can feel highly exclusive to some at times. Camille Vogley- Howes, a double-degree sophomore and violinist in the jazz program, appreciates how the event functions as a bridge between College, Conservatory and community.

“I think [Lorenzo’s] is a nice environment, because it’s one of the very few environments to encourage non-Jazz majors to perform jazz publicly,” they said. “The general atmosphere of the department can be … not very welcoming, which is antithetical to what jazz should be about. I don’t think people do this intentionally, but it just is how it is. Ever since I first met [Hochberg], something that was really different with him in comparison to other jazz majors was he really readily accepted me as a musical peer.”

In creating Jazz Night, Hochberg sought to create a more inclusive jam session environment compared to harsh ones that he had experienced in the past. His openness and acceptance over four years of hosting Jazz Night appear to have paid off.

“A lot of the people in the jazz department don’t take [it] seriously,” Vogley-Howes added. “But this year, we’ve seen a lot more first-years coming and participating, … and they’re more eager to connect with other musicians outside the department. They’re not thinking [in terms of] ‘us vs. them’ or ‘real music’ or ‘real jazz’ or ‘bad music.’”

Despite the fact that Cariglio wants Jazz Night to continue, with Hochberg graduating at the end of the semester, its future is uncertain.

“The hope is that someone will continue it and the responsibilities of promoting it,” Hochberg said. “The important thing is that the community continues. I just hope that somebody in the Jazz program will keep it going, but it’s really not about the gig or the money — it’s about the community.”