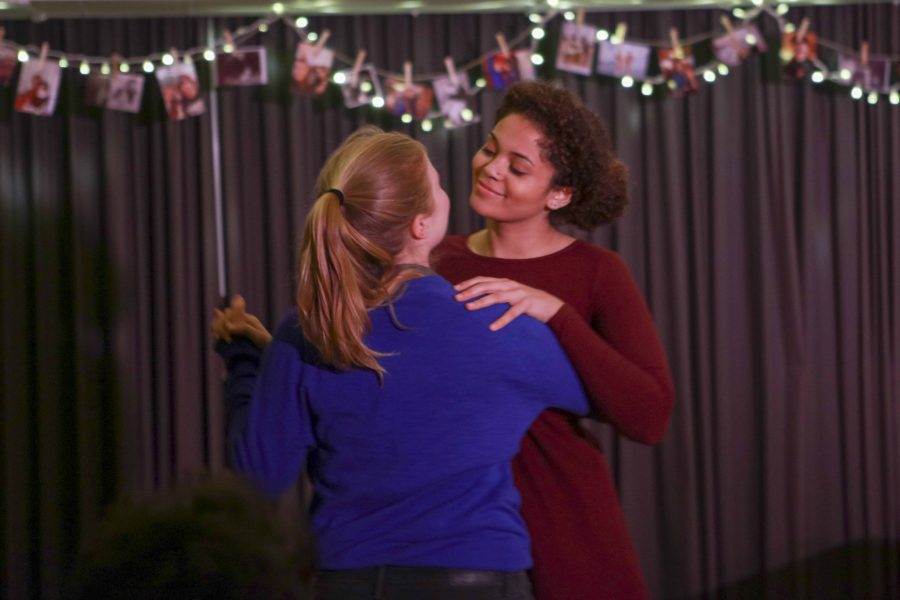 Cascading baubles of multicolored lights and hanging photographs of the cast and crew border the walls of a cozy South Hall studio, creating an intimate setting for Bright Half Life, an Oberlin Student Theater Association production exploring the trials of love.

The non-linear narrative is centered around an interracial lesbian couple’s nearly 50-year relationship, jumping between milestones like their first breakup, first child and first date as well as smaller, quiet moments that capture the intimacy of an enduring relationship.

While the set is simple — consisting of the lights, photographs and three old-fashioned trunks — the various stage elements come together to help solidify the theme of the play: the evolution of a relationship from its onset to its eventual end. With the display of photographs and focus on seemingly insignificant moments, the audience is invited to reconsider the little things that may not stand out in our memories but make all the difference nonetheless.

The relationship between Vicky and Erica, played by College sophomores Imke Heart and Hanna Shykind respectively, begins in 1985 and ends in 2031, spanning reality’s past, present and future. The audience is with the couple throughout — from their introduction, to their twin daughters’ first steps, to the moment they realize separation is inevitable.

At one point, Vicky asks Erica, “Do you look forwards, or backwards?” Bright Half Life does both. In moments delineated by a stomp of the feet, a prolonged gaze or a quiet musical interlude, the relationship between Erica and Vicky jumps between a range of sometimes unpredictable emotions a couple might go through together.

Though it makes for an intriguing production, at times the complexity of the non-linear storyline can be somewhat confusing. Then again, confusion often comes with the territory of looking back and wondering where the years have gone.

“I think people should come in ready to take a ride,” said College senior and director Alex Bernui. “It’s a non-linear story, so at first it’s not going to be like what they have seen before. If people just come in ready to let it happen, … it’s a great time.”

The production runs about an hour and 20 minutes, just enough time to encapsulate the duration of a decades-long relationship. By jumping back and forth in time, OSTA’s production of Bright Half Life explores what it means to really love someone. Scenes range from funny to sad to serious — and yet, they all seamlessly weave together into the fabrics of the relationship and the show.

This interweaving of humor and tragedy creates an interesting dynamic. On one hand, this is a production about how a deep love between two people evolves over 50 years, built on a foundation of the assorted little moments that sometimes outweigh the larger, more dramatic ones. On the other, however, the play invites a broader discussion of race, gender, sexuality and the way these identities shape certain dynamics not only in intimate relationships, but also in the larger context of society.

The play fills in a narrative often left out of central plot lines, exploring a lesbian relationship that, apart from exterior politics and prejudice brought to bear on it by society, looks a lot like everyone else’s, both in its periods of stability and those of turmoil.

“Before I read this play, I had never seen a piece of queer theater that celebrates queerness and queer love,” Bernui said. “Not only does it show how beautiful love is, but it also shows the work that goes into a relationship.”

Though both Vicky and Erica face oppression as gay women, they stand on unsteady footing on the subject of race, culminating in the moment that Vicky says, “I don’t want to educate you on your whiteness.”

During one scene, Vicky argues that while her gayness is an invisible identity she can choose whether to outwardly express, her identity as a Black woman is immediately obvious to everyone around her no matter what space she occupies. Erica, a white woman, has trouble truly understanding this. She feels her sexuality has always marked her out. This ideological divide is a major source of contention between the two, resulting in conflicts not easily or completely resolved.

There are many ups and downs to this relationship — in addition to race and sexuality, the two disagree over how to raise their children, also grappling with the difficulties of impending death and inconsolable grief. Throughout it all, however, it’s clear that above all, Erica and Vicky care deeply about one another.

One motif that appears throughout the production is skydiving, suggesting that love is as risky as jumping out of a plane. Whether it ends on a positive note or in bitter conflict, the sensation of free fall is thrilling.

Performances are scheduled for Friday, April 7 at 8 p.m. and Saturday, April 8 at 3 p.m. and 8 p.m. in South Studios. Tickets are available for $3 in advance in Wilder Hall and $5 at the door.