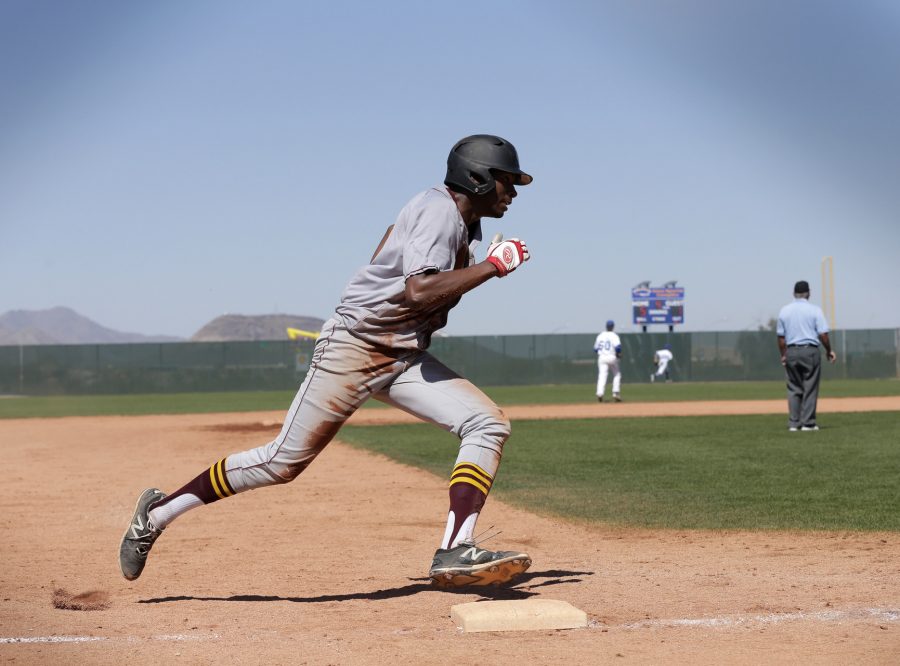 First-year outfielder Amari Newman rounds the base during a game against the Luther College Norse on March 19 on the team’s spring break trip in Tucson, AZ. The team will head to Granville, Ohio, tomorrow to play the Denison University Big Red.

Baseball had its hands full with a four-game series against the College of Wooster Fighting Scots doubleheader last weekend, dropping three-of-four games to the nationally sixth-ranked team. Coming off of a 9–1 non-conference loss against Otterbein University earlier in the week, the Yeomen hoped to hit the ground running against Wooster but could not muster the hits.

The Yeomen started the weekend off with a bang, scoring four runs in the first inning off of Wooster’s ace Michael Houdek. Showing their resiliency, however, the Fighting Scots plated two in the bottom half of the inning to cut the lead in half. By the end of the seventh inning, Wooster had tallied a game-changing 10 runs to end the game early with the mercy rule.

“The biggest challenge about playing a nationally ranked team is slowing the game down and not allowing mistakes to compound,” said senior co-captain Mike Masella. “We had a real chance to win three games this weekend, but we got away from our brand of baseball.”

The Yeomen led in games one, two and four but were only able to take away a win in the 10th inning of game two. Sophomore pitcher David Gaetano brought energy back to the Yeomen as he started game two off strong, allowing zero runs until the seventh inning. First-year Amari Newman put Oberlin on the board with his RBI single to bring senior Brian Carney home. Junior Quin Butler also contributed one run to the Yeomen’s lead as he registered his second homerun of the year.

With the score tied 3–3, the battle continued into the 10th inning. Sophomore pitcher Noah Gear finished up the last three-and-a-half innings without allowing a single Scots run and ultimately earned the win. The Yeomen scored a total of four runs in the tenth inning off of a two RBI double from Ian Dinsmore and RBI singles from Derek Martin and Carney.

“Wooster is a tough team and taking a game from them over the weekend will definitely help us at the end of the conference season when we are making our playoff push,” Masella added. “That being said, I don’t think any of us are content with winning one game against them. We all want a chance to play them again in the conference tournament.”

Day two of the series fared well for the Scots as they mercied the Yeomen 10–0 in the first game before a rebound 9–6 victory in the second game. Junior pitcher Sean Kiley went five innings with two strikeouts and two walks, allowing nine hits and six earned runs in the first game. Kiley now sits at 3–2 on the season.

“Going into the games I thought we had progressed a lot from last year,” Kiley said. “We kept almost all of our starters from last year, and that extra year of experience has made us that much better. We knew going in that Wooster was No. 6, but that made me that much more excited to see what we could do against them.”

The Scots’ offense continued its success in the fourth game when power hitter Jamie Lackner launched a two-run home run. From there, they would go on to score six more runs off of sophomore pitcher Zachary Steer. Steer pitched seven innings for six strikeouts and two walks and allowed 10 hits and eight runs. The final game of the series ended 9–6, but Kiley said the Yeomen are looking to use this opportunity to grow as a unit.

“I’m looking forward to keeping our plan of attack going into the next few conference weekends,” Kiley said. “Our pitchers are doing a better job throwing strikes and keeping hitters off balance, and our offense has taken a much better and more aggressive approach to hitting this year. It’s good to see us taking quality at-bats even against good pitching. [I’m] hoping we can keep this up and put ourselves in a position to make the playoffs.”

The Yeomen took on John Carroll University Wednesday, falling 6–1, and Thursday’s matchup against Capital was canceled. Oberlin hits the road tomorrow to face conference rival Denison University in a doubleheader starting at noon.