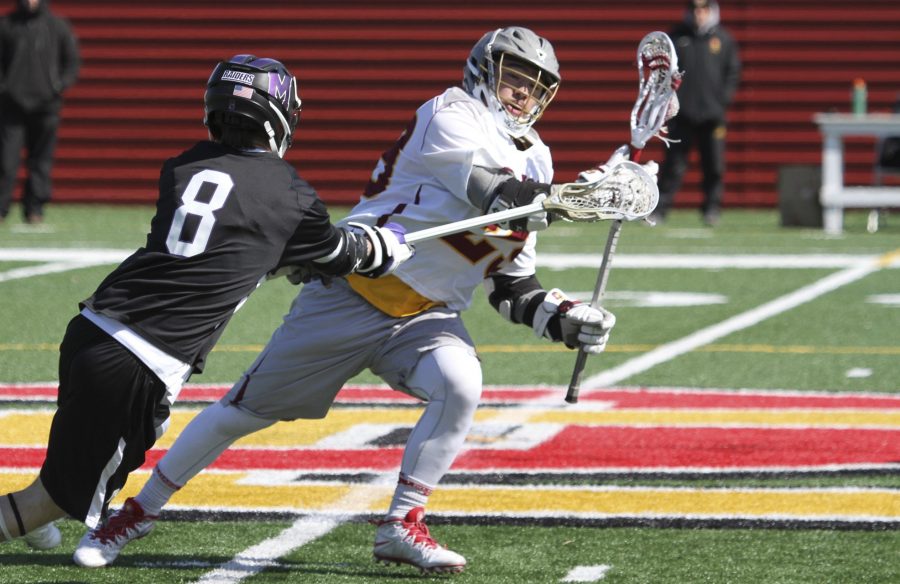 Senior captain Kinori Rosnow maneuvers past a University of Mount Union defender at a home-field game March 11. The Yeomen are hoping to bounce back from last weekend’s loss in their away game at Denison University tomorrow at 1 p.m.

The Yeomen are fighting tooth and nail for a winning season as they edge closer to their final games with an overall 4–6 season and 0–3 conference record. Most recently, The College of Wooster Fighting Scots set the team back with a 13–8 loss last Saturday.

“The Wooster game was an example of us not putting together a 60 minute game,” Head Coach Topher Grossman said. “Mental lapses in the second quarter put us in a hole that was too big to climb out of. We need to run the table if we are going to gain a berth into the North Coast Athletic Conference tournament.”

The Scots, currently ranked second in the NCAC to the Yeomen’s seventh, held a solid lead throughout the game. Leading 3–2 in the first quarter, Wooster sealed the deal with a five-goal barrage in the second quarter, shutting the Yeomen out entirely.

Down at the half 8–2, the Yeomen still came out strong in the second half — keeping the score an even 3–3 in the third quarter and ending the game with a winning 3–2 ratio in the fourth. But it was too little, too late for Oberlin as the Fighting Scots clung to an early lead to secure the win. Senior captain Kinori Rosnow, midfielder and face-off specialist, said the loss is part of a larger pace-of-play problem that the team has been facing all season.

“[The Scots] are a very run ‘n’ gun, fast-hitting team — they just always attack, and we seem to handle that sort of pressure well,” said Rosnow. “What happened was our offense didn’t move [the ball] quite quick enough, and so we didn’t attack the goal as effectively as we could. A lot of the chances that we had were also kind of lost to misplaced shots and things like that.”

Sophomore attacker Jake Parentis chalks the loss up to a young team’s rocky start, as more than half of the team’s 30 players are underclassmen.

“I think we just need to start working better as a group,” Parentis said. “We’re pretty young and it takes a lot of time to build chemistry, especially with a lot of young guys, but we’re getting better every game.”

The narrower loss against Wooster is an improvement for the Yeomen, who had much more disparate results in previous games against conference rivals. Oberlin lost 20–8 to Wittenberg University and 21–6 to Ohio Wesleyan in the past few weeks. Despite the most recent loss, some players shone. Rosnow came out on top for the Yeomen with a team-high three goals, 15 ground balls and an impressive 18 out of 25 face-off wins, bringing his season win percentage for face-offs to 71 percent.

First-year goalkeeper Calvin Filson also showed up for the Yeomen, totaling a career-high 15 saves and bringing his save percentage for the game to 54 percent. Sophomore midfielder Jay Messina and junior attacker John Sutherland also snagged a couple of stats, adding two goals each to the scoreboard.

Before this game, the Yeomen had just ended their losing streak in conference play by crushing a non-conference matchup against the Washington and Jefferson College Presidents 14–11. As the last regular-season game of the year, the Yeomen hoped to use the win to gain momentum for upcoming matches. Sophomore midfielder Elie Small said he hopes the team can improve some of their playing strategies in conference play to bring home a winning record.

“Our biggest problems have been playing a consistent 60 minutes, having continuous communication on defense and possessing the ball on offense,” said Small. “I honestly believe we can beat any team in the conference if we play to our potential. We have great leadership, great coaching and a talented group of players. We’re ready to start executing, win games and finish the season above 500.”

Rosnow echoed Small’s sentiment, adding that consistency will be key for the Yeomen as the season winds down.

“I want to win every game,” Rosnow said. “I just want to see consistent play from here on out. If we can show that we can consistently play for 60 minutes, I will have done my job as a leader.”

The Yeomen hit the field again tomorrow at 1 p.m. to play Denison University, currently 8–1 overall and 3–0 in conference, in Granville, Ohio. Last year, the Yeomen were able to keep Denison within three points the entire game and came close to upsetting the high-ranked team.

“We’re playing one of the best teams in the nation this weekend,” said Parentis. “It’ll be a good test to see how much we’ve improved throughout the season.”