In the Locker Room with Men’s Tennis 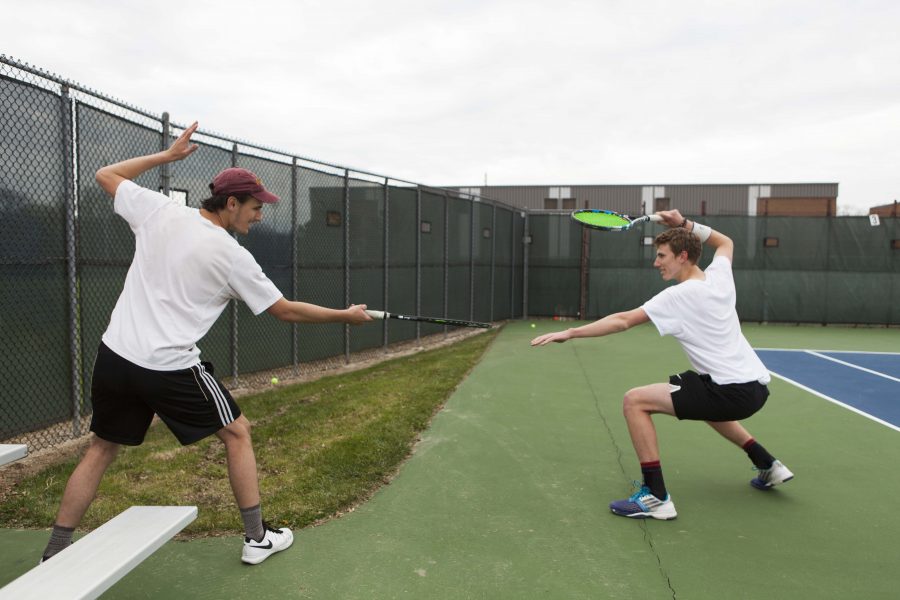 This week, the Review sat down with the Gittings brothers to discuss men’s tennis’ 5–0 spring trip to South Carolina, the remaining regular season matchups and their preparations for the North Coast Athletic Conference tournament. Hailing from Larchmont, NY, Robert, a junior, and Mattie, a sophomore, grew up playing together and have taken their chemistry to the Oberlin courts for multiple seasons now.

What is it like playing with your brother on the team?

Robert Gittings: It’s awesome. It’s especially cool in tennis. Growing up, we didn’t play in traditional tennis systems. We didn’t play in a lot of huge clinics with a lot of different people and coaches. A lot of the time we just spent hitting with each other. It’s good because it’s someone who you’re super comfortable with. It’s also a person that I can just find my game when I’m hitting his ball because that’s the ball, that I grew up hitting.

Mattie Gittings: It’s really great that we can be in school together. We hit a bunch of balls when we go home, and we can continue hitting one or two hours a day. It’s great to have someone who you’re really comfortable with and see all the time to have on your team.

How has the season been going so far?

RG: I think we are in a place where we feel like we haven’t accomplished anything yet that represents how good we are. Team dynamic-wise, we have a really big team. We have 14 people — that makes competition for spots really competitive. Practice has been really high quality, and we have seen how good we are, but we haven’t necessarily seen that represented by our results. There are matches that we felt like we could have won had a couple of things gone a little bit differently.

MG: We had two really big weekends the last two weekends, playing three matches each against nationally ranked teams, and then we just couldn’t really put it together completely. We have a hump that we have to come over. It’s like a mental thing as well as a talent and physical thing.

How much confidence did the team receive from going 5–0 on the spring trip to Hilton Head, SC?

RG: The competition in Hilton Head in the past was better than it was this year, but we haven’t played as many matches. This year we played five matches, which was a lot. That was a huge benefit for a team as big and as competitive as ours, because we got to throw a lot of different lineups out there and see who works in what match situation.

MG: That trip is huge for our team confidence. It is just great to go out there and have everyone get really loud and be really excited about the tennis we were playing. It was also really big for team chemistry. It was great to have that week in South Carolina where we were all together.

Have you seen more consistency with the team in singles or doubles play?

MG: A lot of the reason we have been successful in singles this year is because of the depth of our lineup. It’s been great to have a rotating door, like five and six singles. Doubles is a little trickier because we have teams that we have been running for a long time.

What improvements have you and the team made throughout the season?

RG: We have gotten a lot better at being loud and supportive and having our energy show up during matches, which is really huge. Tennis can be a really lonely sport sometimes. Personally, the biggest thing I’ve improved is my mental mindset approach to tennis. I’ve been able to be more competitive because I’ve been able to convince myself that it’s life or death out there.

MG: Personally, I have matured a lot as a player this year. I’ve been able to think more critically about the game and about which shots I’m going to hit. In terms of the team, it’s just raising the level of practice. It’s going out there every day knowing everyone is going to be working their hardest.

How crucial are the final two matches of the regular season against Kenyon and Allegheny?

RG: Our primary focus is the Kenyon match. It’s all fury for Kenyon. We have something to prove. They have owned the conference for the past 10–15 years. This year, we really want to bring it to them.

MG: Allegheny is our senior day and our hype game, everyone should come out. That should be a really fun match. Kenyon is a school that has been dominant throughout our coach’s [Eric Ishida] tenure.

What are your goals for the conference tournament?

RG: Ideally, I want to go farther than we have ever gone in this conference tournament. I want to win the second round, but we still need to gear up for that four versus five matchup in the first round because that’s a tight matchup. You can’t think about the next match until you’ve won that one.

MG: It’s always going to be a tough match in the first round. It’s always Kenyon who we have to overcome, and this year I think we can do that.