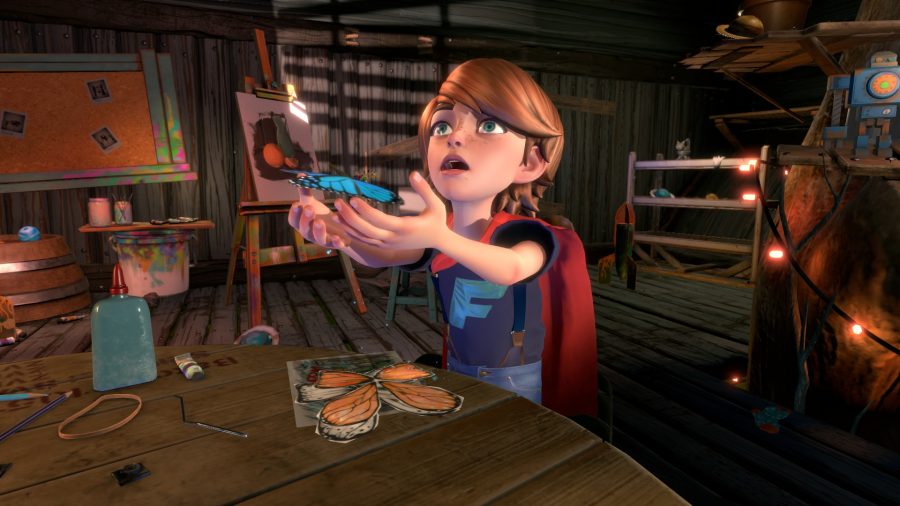 In Blackwood Crossing, players follow Scarlett, older sister of Finn (pictured), as they come to terms with the death of their parents.

Loss is a difficult concept to grapple with. We dance around the issue, often refusing to acknowledge it. Even when forced to face it head on, we try to ignore the facts and pretend that whatever is causing the loss we feel never happened. But eventually, we hopefully make a change. This is the central theme behind Blackwood Crossing, a game released April 4 by British developer Paper Seven.

Blackwood Crossing is a “walking simulator” — a form those who have played games like The Stanley Parable and Firewatch will find familiar — in which you take on the role of Scarlett as she accompanies her younger brother, Finn, on a train ride.

Players navigate Scarlett deeper into the game by solving puzzles littered throughout the train, and the game’s implementation of this mechanic is what ultimately differentiates Blackwood Crossing from other walking simulators. Usually, in games such as these, the puzzles merely exist to explore the world and push you from one end of the game to the other. Blackwood Crossing doesn’t feel that way, as the puzzles are tied thematically to the story, framing the game’s plot and serving as the player’s waypoint to understanding Scarlett and Finn’s lives.

As you come to learn, Scarlett and Finn were orphaned when Finn was very young. He struggles tremendously with this loss, desperately craving human connection. As a teenager, Scarlett finds it difficult to identify with Finn’s playful nature, which adds complexity to their relationship that the player explores through the game’s puzzles.

As it progresses, the game comes to feel like more than the sum of these small puzzles, as the player comes to discover more about Scarlett and Finn by piecing together segments of dialogue from the game’s other characters — who wear playful, animal-like masks and reside throughout the train — and discovering their relationships to the game’s principal duo. When put together, these small interactions speak volumes about the world and do well to add to the tension created by the game’s stunning environments.

That said, not all the puzzles in Blackwood Crossing are clever, and at times become tedious. Items hidden in the environment are occasionally too difficult to find because they incidentally blend in with the background or due to mismatched sound cues. Once or twice, I spent 15 minutes or more looping around the environment simply looking for a small puzzle piece that I needed to progress. Though these instances only happened a couple times, with a game as short as this one, that is a bit of a problem.

That said, the game’s success hinges far more on its story, which is superb outside of its opening stretch. As I began playing, I found I wasn’t drawn in at all, as after developing brilliantly in its first few minutes,the story seemed to stagnate for a while. About half an hour into this two hour game, I felt bored and ready to be done.

But suddenly, the rest of the game unfolded beautifully. Flaws in the game engine became less noticeable because I was drawn in by the ever-changing environments; I stopped noticing that I was stuck on puzzles for longer than I liked because the puzzles themselves reflected the emotions I was feeling. It was almost as if I had stopped merely playing the game and began to exist within it.

Then, as quickly as it started, it was over. The journey, clocking in at around two hours, is one that’s easy to complete in a single sitting, as the game is so immersive that it’s easy to forget how much time you’ve spent on it until you reach the end. And while the game has its share of flaws, the way the experience captures loss and subverts expectations is nothing short of a marvel. The writing is succinct and perfect for what it needs to do. The visuals and music also convey immense emotion independent of the writing.

If you come to games looking for a light escape, Blackwood Crossing might not be for you. It delves into the depths of pain and dwells in these emotions. It hurts. But that’s all in service of something greater, something warm and light. It’s about moving on.