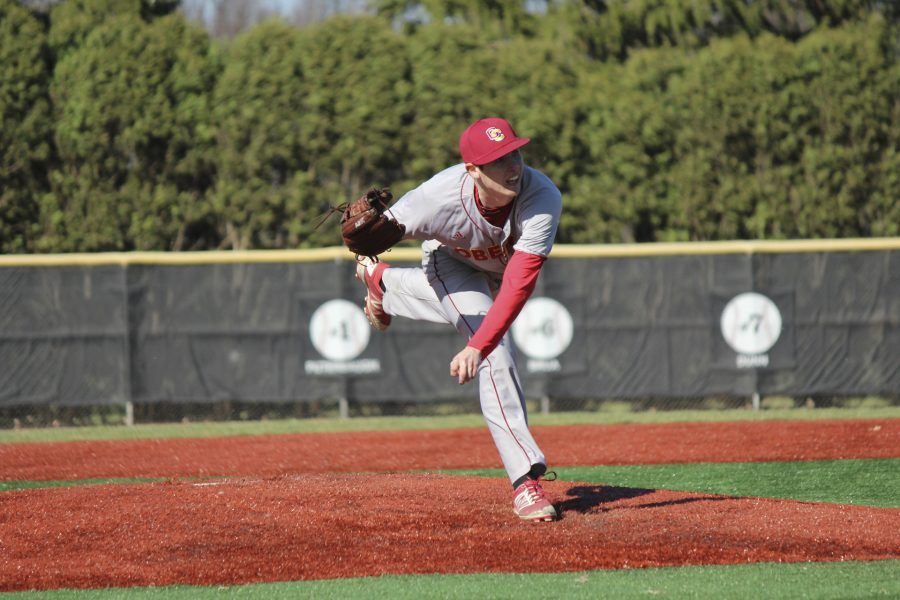 Sophomore Zach Steer pitches for the Yeomen. Steer is currently 3–1 and has struck out 18 batters in 29.2 innings this season. The left-handed pitcher led Oberlin to a 14–4 win over the Hiram College Terriers last Saturday.

Oberlin’s offense turned from cold to scorching hot over a four-game series with the Hiram College Terriers. The Yeomen bounced back from two tough losses Friday to bury the Terriers 14–4 in Saturday’s game one and 13–4 in the nightcap. Oberlin’s North Coast Athletic Conference record now stands at 3–5. Head Coach Adrian Abrahamowicz said he was proud of how the team responded in Saturday’s games.

“We played a little bit tight on Friday, but we were much more relaxed on Saturday,” he said. “Once a few things went our way, we played the way we are capable of playing.”

In the first game of the Saturday afternoon doubleheader, Hiram took an early lead, scoring four runs in the first two innings. The Yeomen offense erupted for four runs in the fourth inning as senior Brian Carney’s three-run home run and an RBI single off the bat of senior captain Justin Cruz put Oberlin ahead 6–4. Pushing across eight runs over the final three innings, Oberlin would eventually 10-run mercy the Terriers 14–4 in seven innings.

“Carney’s home run was one of the biggest highlights of the weekend,” said junior pitcher Sean Kiley. “Getting that lead in the game was a big confidence booster for us, and we were able to keep that momentum through the rest of the day.”

Oberlin’s pitching was also dominant in the game as sophomore Zach Steer earned the win to improve to 3–1 on the season. The Concord, MA, native allowed four runs over 6.1 innings on eight hits.

“After Saturday’s first game, you could see a fire in the team that wasn’t there before,” said senior Joe Greenberg. “It definitely carried into game two and really helped us win.”

During the second game, the Yeomen earned an early lead, scoring seven runs in the first two innings to go up 7–0. Key offensive plays came with RBI doubles from junior Quin Butler in the first inning and Cruz in the second inning. Oberlin’s offense continued to find a rhythm, adding six runs over the remaining six innings.

On the mound, sophomore Noah Gear kept Hiram’s bats in check, surrendering just one earned run over seven innings. The Hampton, VA, native is now 3–1 on the season with a team second-best 4.03 ERA.

With the Saturday victories, the team bounced back from its two Friday losses to Hiram. The Yeomen dropped the first game 6–1 and the second 6–5.

Oberlin’s offense stagnated during the first game as Cruz’s sacrifice fly in the fifth inning represented Oberlin’s lone run in the 6–1 loss. Despite outhitting Hiram 11–3 in game two, situational hitting proved to be the difference in Oberlin’s 6–5 setback. With 11 conference games remaining, junior pitcher Nick Morgan said the Yeomen remain optimistic about their chances of returning to the NCAC Tournament for the third time in the past five years.

“It felt so good and relieving to end the series against Hiram with some wins,” he said. “This is the momentum that we need to carry into our next two conference weekends.”

The Yeomen are preparing for a four-game series against the Kenyon College Lords that will begin tomorrow at 1 p.m. Next weekend, the Yeomen will host Allegheny College in four pivotal matchups with senior day slated for Sunday, April 30. With the biggest games of the season still ahead for the Yeomen, Abrahamowicz said focus is the key to success.

“The games are huge this weekend,” he said. “We’re facing intense and serious competition in the coming weeks. But we have to remember that we control our own destiny.”