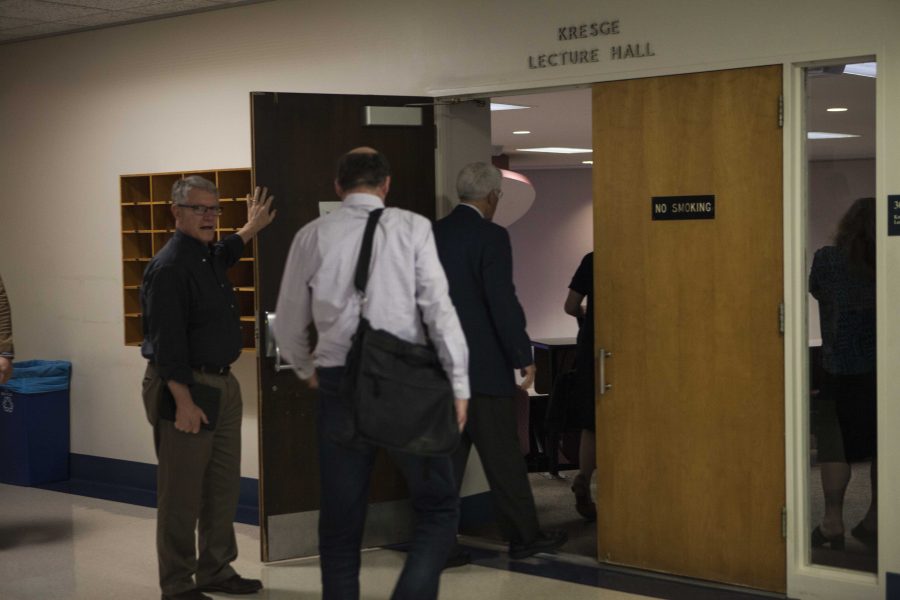 Faculty and administrators enter King Building Room 306 for Wednesday's General Faculty meeting. With impending administrative turnover, faculty is reckoning with the viability of the Strategic Plan.

With significant turnover in senior administrative positions at the end of this year, faculty members are navigating different avenues of maintaining the Strategic Plan implementation committees’ goals during a major transitional period.

Wednesday’s faculty meeting opened with President Marvin Krislov’s announcement that Vice President and General Counsel Sandhya Subramanian will depart Oberlin at the end of the semester to serve as Dartmouth College’s general counsel next year. With Krislov and Vice President of Finance and Administraion Mike Frandsen set to leave this year and Dean of Admissions Debra Chermonte’s departure last fall, this announcement marked yet another staffing loss in the senior administration.

The incoming administrative positional transitions will cause some hiccups and delays in some of the recommendations that implementation committees are currently assembling, according to Dean of the College of Arts and Sciences Tim Elgren. While the Strategic Plan Implementation Committee on Diversity, Equity and Inclusion — otherwise known as SPIDIE — presented its suggestions at the General Faculty meeting, for instance, Elgren said that SPIDIE’s more expensive recommendations are less feasible for implementation in the near future.

Some of SPIDIE’s suggestions include adding a chief diversity officer to the new president’s senior staff and having administrative monitoring of diversity standards during department hiring. The report also recommends increasing financial aid to students. Elgren said that implementing these recommendations is dependent on the findings of the Resource Management Implementation Committee’s final report.

Elgren explained that even though Resource Management’s March report identified and suggested cost-reducing measures, the group’s ideas cannot take off without Vice President of Finance and Administration Mike Frandsen assessing the actual financial allocations. With Frandsen leaving after this semester, the already rocky functioning of the implementation committees will face more difficulties.

“I wished there was more communication [with] the implementation committees, and from what I can tell there was none,” said History Professor and Co-Chair of the Resource Management Implementation Committee Len Smith. “I think it was an off time to try and implement a strategic plan [last spring]. So much around here changes with a new administration. I’ve seen three of them in my time here, and there’s always so much in flux.”

Adding a chief diversity officer to the president’s senior staff will cost an estimated $300,000 to $500,000 per year, according to SPIDIE. Elgren said that diversifying the student body would also be costly because of the additional financial aid that the College would have to allocate to high-need students. He added that recruiting diverse faculty members would be feasible, as it’s a relatively cost-neutral measure.

“I think that SPIDIE will be recast be­yond compositional to interactional diver­sity,” Elgren said, explaining that changes in hiring could produce diversity on campus in the face of the costlier suggestions.

Japanese professor Ann Sherif said that even though some of the SPIDIE recom­mendations may not be able to take off, many areas on campus have already made moves to increase diversity.

“Many things in the report and the rec­ommendations are actually in place, and many departments in the College actually have shared goals about diversity among staff, faculty and students and have had conversations about what diversity is and why it’s essential, and that’s part of how we operate,” Sherif said.

Faculty has also been making steps to assist with cost-saving measures. The Col­lege Faculty Council and Conservatory Faculty Council have been holding listen­ing sessions over the past two weeks to hear suggestions from faculty members about how to reduce costs. The cost of the Research Status and personnel are the two biggest considerations for the councils, which will produce final reports for the ad­ministration at the end of April. In turn, the administration will interpret and present the reports’ findings to the Board of Trust­ees in June. Elgren said that the College has already adjusted personnel expenses through actions like the Volunteer Sepa­ration Incentive Payment, a campus-wide offer to employees allowing them to retire at the end of 2016 with a full year’s pay and benefits.

“[The faculty councils have] been hav­ing these conversations with faculty, and they’re asking a variety of things,” Elgren said. “The majority of our expenses are in personnel, so how we use the number of people that we have. Of course we started with [Oberlin College Office and Profes­sional Employees] by reducing some of the positions that we gained through the VSIP. That was a small step, but it was the first step and it was because of the VSIP that we had that opportunity. Now the conversa­tion will be how we think about the num­ber of faculty that we have and how to think about that number. What’s the right num­ber of people in different categories? We have tenure track-faculty, visiting faculty, we have teaching staff, and so all of those are the things we control in the College of Arts and Sciences, and that’s what the CFC is being asked to prioritize — our share of our cuts that come from across the College.”

Although only eight faculty members serve on the CFC, the greater faculty com­munity feels the committee is handling the pressure of budgetary suggestions well.

“I have been extremely impressed with how [the] CFC is handling the process, and I’m very grateful for their seriousness and dedication,” Presidential Search Commit­tee Faculty Representative Jennifer Bryan said.

Sherif echoed Bryan’s sentiment, adding that the listening sessions have pushed and empowered faculty to have a stake in finan­cial decision-making processes.

“Having these particular listening ses­sions and reaching out to the faculty and trying to compile the range of views about budget priorities is something that kind of came up very suddenly at a very busy time at the end of the semester,” Sherif said. “I think that everyone thought it was a good idea for us to take this opportunity for us to express our opinions. We did have ques­tions about how exactly the faculty’s views will be represented by the senior adminis­tration to the board and whether the fac­ulty’s views — how they’re represented — will be communicated to the faculty, how the senior administration actually says to the board. … We haven’t gotten a response to that yet.”

“Administrators are taking their orders from the Board of Trustees,” Politics profes­sor Ron Kahn said. “They are very much concerned about having enough money to give to scholarships, and very concerned about taking too much out of the endow­ment. There is a purpose for deans and presidents, but they need to look at this very carefully. They are looking at the over­all needs of Oberlin College over the next 30 years.”

In light of administrative turnover and the College’s financial austerity, Sherif said she felt that these circumstances are unique and should not be normalized; rather, it is important for the more stable communities on campus, like the faculty, to help changes occur.

“This is such a tremendously transition­al time,” Sherif said. “I don’t think anybody at the College has seen this level of instabil­ity in the senior staff, and today, we learned of yet another departure. There have some staffing changes at other levels in key of­fices in the College in these last two weeks. There’s just been too much going on to say that right now we’re going to start under­taking a major initiative like the SPIDIE re­port, … but first we really need to stabilize the senior administration and make sure that the College can run … and that we have good transparency and communication.”

Sherif added that the sentiment she has seen among her colleagues indicates that although the faculty is being proactive, it is important for the new senior adminis­trators — namely the new president — to become involved and tackle obstacles the College faces as soon as possible.

“I think everyone in the faculty also feels very strongly to make sure that if there is an incoming president, that that individual be involved in these conversations and discus­sions as early as possible as soon as that person is identified,” she said.