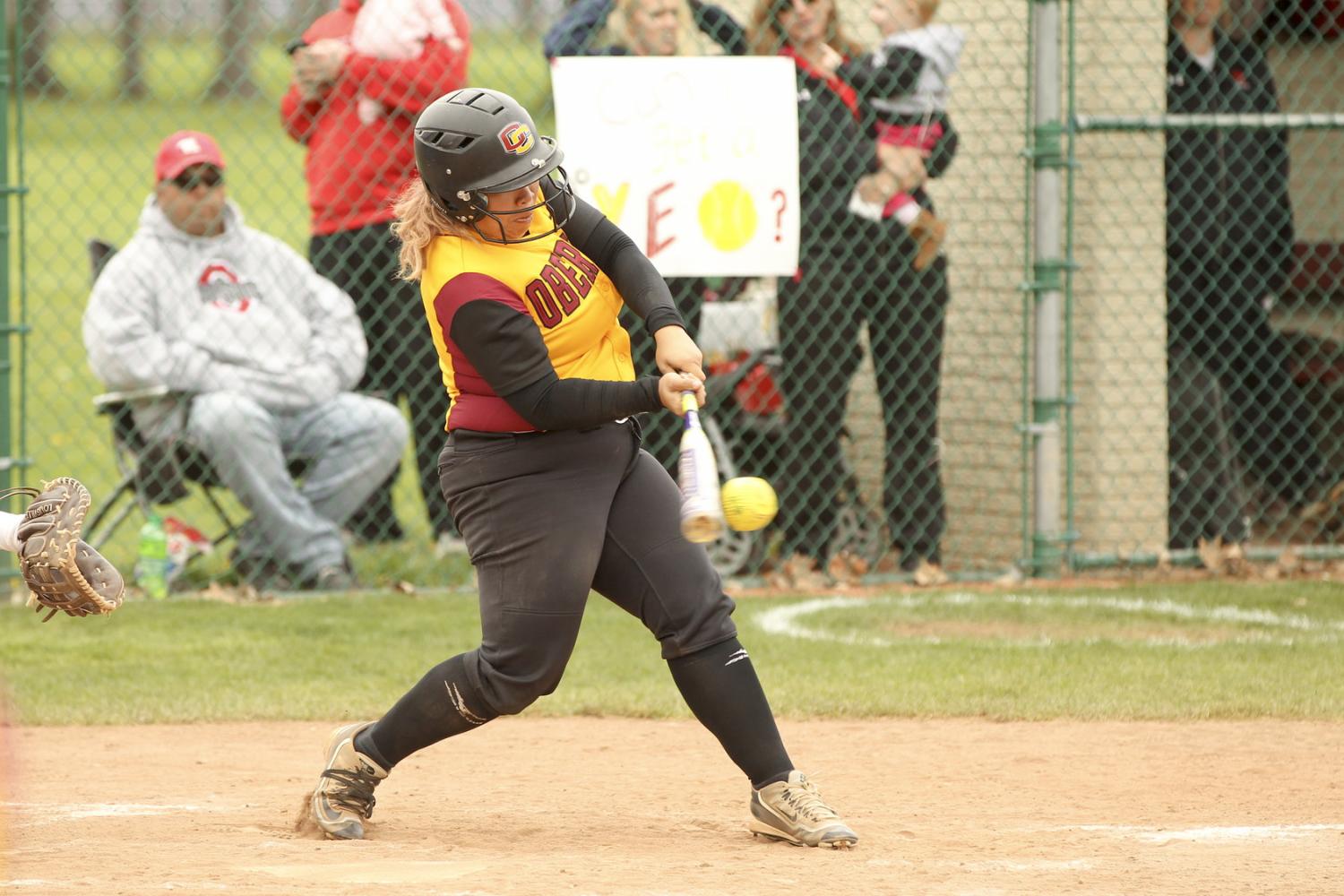 Senior captain Grace Evans connects with a pitch against Wittenberg University on Senior Day last Saturday. The Yeowomen finished their season 12–28 overall and 2–14 in the NCAC.

The softball team concluded their season Tuesday evening with a split against North Coast Athletic Conference rival, the Hiram College Terriers. Although the Yeowomen failed to make the NCAC Tournament, they saw improvements across the board in offensive and defensive categories — and most importantly in wins. The team took the first game against the Terriers 11–7 in an 11-inning thriller before dropping the season finale 5–3.

Seniors Tori Poplaski, Grace Evans and Sami Mericle concluded their careers Tuesday evening with Poplaski and Evans holding multiple offensive records. Evans will graduate as the all-time hits leader with 141, as well as the career leader in doubles and at-bats. Poplaski will depart Oberlin as the career home-run leader with 11 while Mericle capped off a successful senior campaign batting .283 with a .303 on-base percentage. Junior Dana Rae Goldstein had high praise for the three seniors.

“Each of them brought something different to the team, a necessary energy,” Golstein said. “You could go to each of them and get unique yet equally valuable advice. They gave the rest of the team an air of composure and calm that we haven’t always had in previous years.”

In the game one victory, first-year Leandre Glendenning’s RBI single and a three-run double off the bat of Evans broke open the 7–7 tie in the 11th inning. Oberlin outhit Hiram 17–16, as the bat backed Glendenning’s effort on the mound to improve her record to 3–4. During game two, the Yeowomen’s offense struggled to find a rhythm as Hiram scored four runs in the third inning to take a 5–1 advantage. Oberlin would threaten in the seventh with an RBI triple from Glendenning and a Mericle’s RBI groundout to cut the deficit to 5–3.

Coming off of a 2–35 record in 2016, the Yeowomen saw huge improvements in 2017, finishing 12–28. Oberlin’s two conference wins this season is an improvement from last year’s 1–15 stint in the NCAC. Poplaski said that team’s upswing began on their 12-game spring trip to Clermont, FL.

“We really came out strong at the beginning of the week and at the end of the week,” she said. “That is when we were playing some of our best softball against good competition and really showing what we can do as a team and as a program.”

Looking forward to next season, the softball team will bring back many key contributors. With a small graduating class, nearly the whole team will return with hopes for another improved season. Offensively, the Yeowomen batted .306 as a team with sophomore Emma Downing leading the pack with her .374 average. Goldstein completed the 2017 campaign batting .368 while first-year Alexis Dill ended the season hitting .336. Head Coach Sara Schoenhoft said she was impressed with the determination of the underclassmen to improve over the course of the season.

“A lot of the underclassman have really good work ethics and are willing to put the extra time in outside of practice,” she said. “That kind of attitude is contagious and something that softball has not always had in the past.”

With eight wins combined over the past two seasons, the team took numerous strides under Schoenhoft’s second year at the helm. They also had success on the mound with Poplaski leading the squad with four wins and sophomore Hannah Rasmussen posting a team-best 3.97 earned run average in 37 innings pitched.

“Our rising seniors will be looked to for their leadership and experience and I am confident they will step up as the Senior leaders on the team,” she said. “Having some college experience under their belts, our rising sophomores are going to continue to get stronger. Right now, we have seven incoming freshman who I really believe are going to help take this program to levels that OCSB has never reached!”