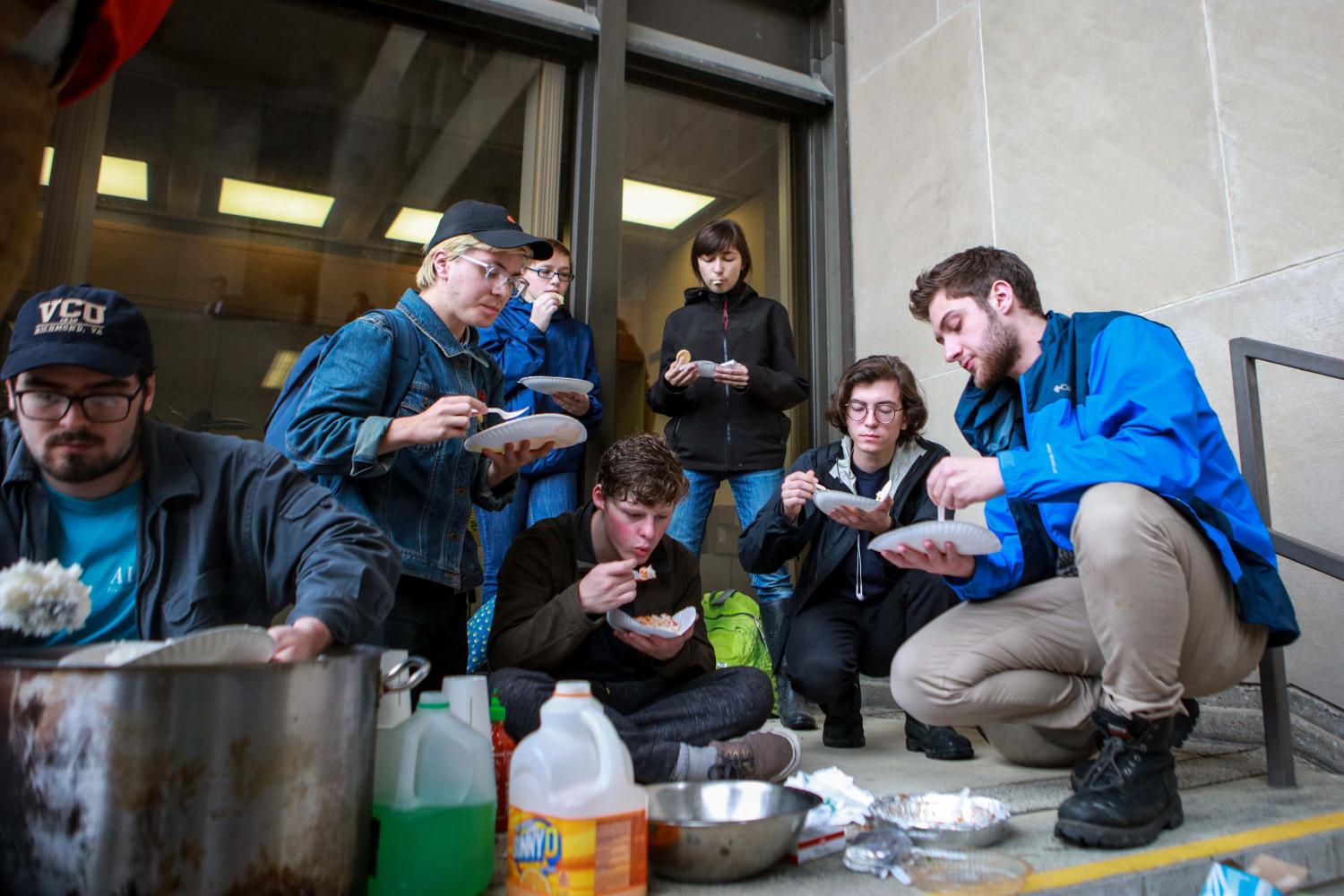 Students participate in Monday’s Student Labor Action Coalition-led boycott of Bon Appétit Management Company. The dining halls served only a fraction of the students they normally do in light of demands that the College switch to in-house management.

Dining halls across campus were unusually empty Monday as hundreds boycotted Bon Appétit Management Company to stand in solidarity with Campus Dining Services staff. The protest, initiated by the Student Labor Action Coalition, aimed to push the College to separate from Bon Appétit and switch to a self-management food service model.

According to United Auto Worker steward and CDS grill cook, counter cook and cashier Denise Capers, Stevenson and Dascomb Dining Halls normally serve 600–800 and 500 students, respectively, for lunch each day. Capers said that according to the dining hall registers, 175 people ate at Stevenson and 167 ate at Dascomb for lunch Monday. Stevenson, Dascomb and Lord-Saunders Dining Hall normally serve 600–800, 350 and 150 people for dinner, while the registers calculated that 275, 135 and 64 dined Monday evening, respectively.

The boycott came out of a worker’s panel that SLAC held with various student employees and College union workers Friday, April 21. At the panel, worker concerns with Bon Appétit’s management surfaced, according to SLAC Co-Chair and College senior Jeeva Muhil. SLAC members then decided to initiate the boycott to support CDS workers.

“They were just very adamant about issues, and a lot of the issues about Bon Appétit came to light,” Muhil said. “We know that this is a really important time of financial transition for the College, so we talked about having an action to really raise awareness about Bon Appétit and really put getting rid of it on the table, in a broader sense.”

SLAC asked students not to attend the campus dining halls for Monday lunch and provided an alternative in Wilder Hall instead. Harkness and Keep co-ops, as well as Agave Burrito Bar & Tequileria, donated food for the effort. The number of students who came to SLAC’s lunch exceeded the fire code limits of the building, so they moved to the underpass of Mudd library, where students followed and ate together, despite the rain.

Capers expressed her appreciation for the students that mobilized for her and her colleagues.

“I was really full of emotion, appreciation,” she said. “That you kids, [approaching] finals, are being so socially aware of what’s going on and caring about the people who work here — so many times we’re made to feel that we’re the lowest of the low on the chain of Oberlin College staff, … so for these kids to pull together in such a short amount of time to show your support for us, really was just overwhelming in a good way.”

SLAC and many UAW members want the College to switch to an in-house dining system, which would have the College hire its own dining managers and run the dining halls independently of a food management company. Muhil said that other colleges similar to Oberlin have adopted self-managed food service models.

“[Other] schools have been able to self-manage their dining halls. Schools that Oberlin competes with — Occidental, Bowdoin, UCLA, Amherst and Middlebury — all compete with Oberlin for students, all have self-managed dining halls and all of them rank better in dining services,” Muhil said. “Getting rid of Bon Appétit is one of the ways that the College can save money without threatening Oberlin’s financial accessibility or its labor force.”

Oberlin UAW Chair Milton Wyman said that one of the ways Bon Appétit wastes money is in its inefficient food-purchasing practices.

“You know, they say how they get organic food, but it’s half-rotten when it gets here,” he said. “They buy in such large quantities that it sits on the docking lots before they can get it all out.”

Capers added that CDS workers see and hear from students when the food Bon Appétit serves is or isn’t what they want. She said that even though CDS workers — many of whom are chefs with culinary degrees and have previously worked in fine dining — want to make changes that would improve food quality, Bon Appétit management allows little to no flexibility in changing recipes.

“I feel like [Bon Appétit] makes a big show every year,” Capers said. “[They say,] ‘We value your years of experience. We value your expertise. We value your knowledge. We want your input.’ Then we give our input and [nothing happens]. So I think that’s a show. … At Stevenson, we’re the ones out there serving you. So we hear, ‘I like this. I like that. I want this. I don’t want that.’ We hear that, and it’s clear, as people who take pride in our work, we want you to be happy because we care.”

Capers said she felt disheartened by Bon Appétit’s management, adding that her efforts to serve the students to the best of her ability feel undermined by her inability to improve food quality.

“We’re serving breakfast, lunch and dinner,” she said. “It just shouldn’t be such a battle, such a struggle. It shouldn’t be them versus us. We should be working together for a common goal, which is putting out a good meal and having good things for you guys to eat — good things that you want to eat.”

Muhil added that the dining management company has a history of controversy beyond Oberlin, including its involvement in the prison, oil and gas, mining and construction and defense industries.

“In 2001, students held a boycott of the dining halls to get rid of Sodexho-Marriott, and they were inspired to do so by the ‘Not With Our Money’ campaign, which attacked Sodexho’s anti-union actions and Sodexho’s ties to the private prison industry; they were shareholders of the Corrections Corporation of America, one of the largest private prison firms,” Muhil said. “The original goal of the ‘Not With Our Money’ campaign was to go to self-management, and instead the College got rid of Sodexho, and instead brought in Bon Appétit. And Bon Appétit is also a shareholder in Trinity Services, which caters to the prison-industrial complex.”

Moving forward, Muhil said that SLAC hopes to meet with Vice President and Dean of Students Meredith Raimondo to begin negotiating changes over the dining management system. However, Raimondo said that the College has no current plans to change its relationship with Bon Appétit.

“In choosing a management strategy for dining, the College considers a wide range of factors — cost-effectiveness, access to additional resources relevant to developing an excellent dining program, strategies to enhance professional development and the skill sets of dining managers, the quality of the program from the perspective of students, the ability to provide effective management as defined by applicable policies and contracts, the ability to realize value commitments such as use of locally grown foods, the capacity to contribute to the educational aspect of the residential experience, to name some of the most important,” she wrote in an email to the Review. “The College’s partnership with Bon Appétit allows us to achieve a remarkable number of our priorities at a high level.”

CDS grill cook, counter cook and cashier Matt Kubach said that he and other UAW members have been meeting with Raimondo this past semester to express their concerns and gain financial information about Bon Appétit to prove that self-management would benefit the campus. However, the College has not made that information available.

“When we report to somebody, we’re reporting to an organization that’s a for-profit,” Kubach said. “The rest of the campus is a non-profit, and obviously you’ve got to make money, but that doesn’t necessarily mean you’ve got to make a ton of money. I kind of feel Bon Appétit wouldn’t be here if they weren’t making money. I don’t think they’re here for good will. I think for me, personally, … what I would like to see in the dining program is to just try to break even — provide the fair wages, try to lower the room and board cost. I think if you’re cutting out a large chunk of what you’re paying Bon Appétit, you can achieve that a little more easily.”

Wyman explained how the UAW plans to continue mobilizing support for change.

“We really appreciate the support from all of the students and the student groups,” Wyman said. “I think it really sends a strong message to management, even to the higher ups and the administration. We have four different unions on this campus, and if we stick together and if student coalitions stick together with us, we’re helping each other out. They have to listen. The next thing probably would be getting parents involved during the commencement period, and then next year we’ll have to set up with underclassmen if things haven’t gotten any better when the trustees get in at the beginning of the school year.”

Bon Appétit managers at the College declined to comment for this article.