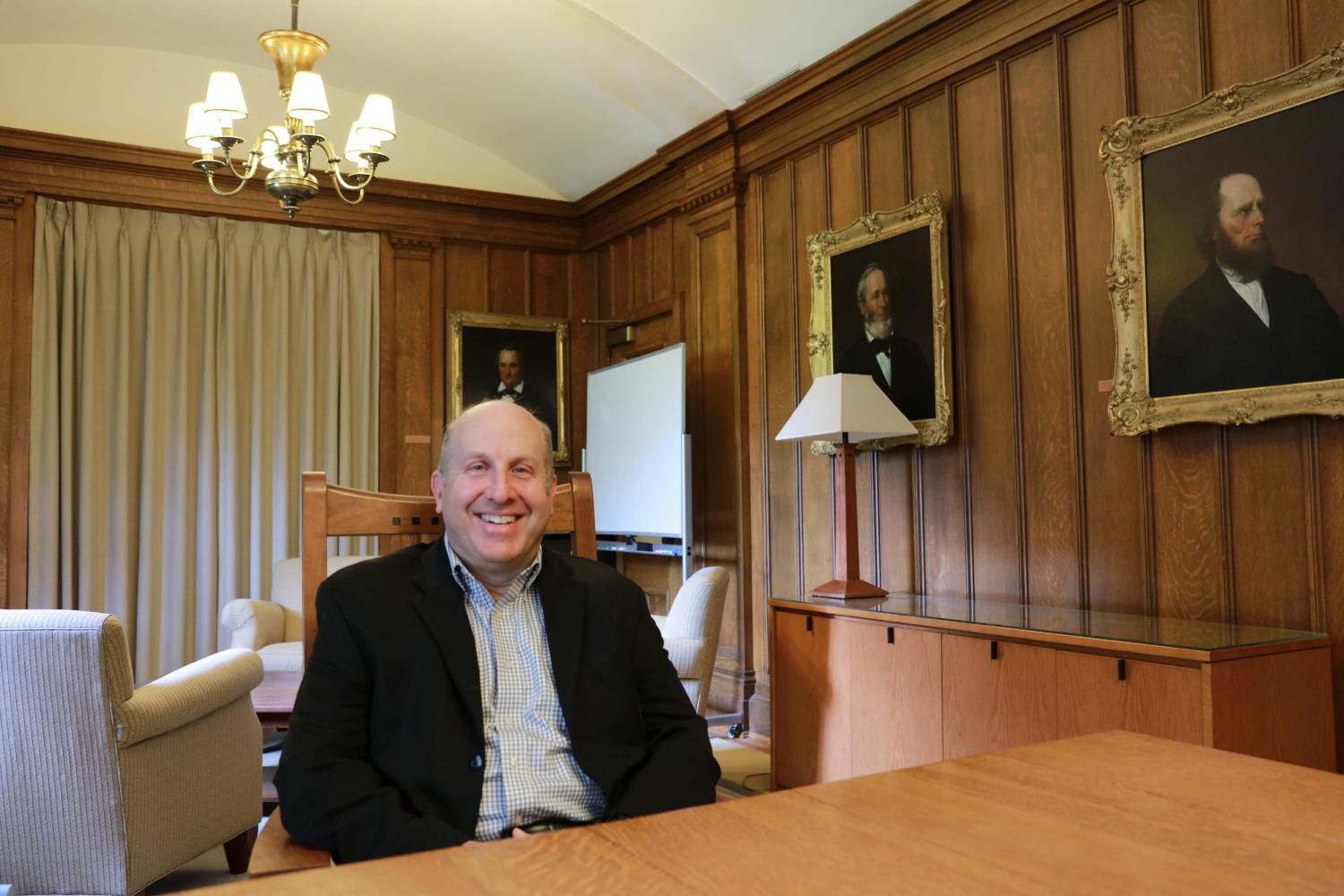 President Marvin Krislov sits in the Cass Gilbert conference room. Krislov departs at the end of this semester after a decade at Oberlin to become president of Pace University this fall.

Fourteenth President Marvin Krislov departs from Oberlin this semester after a decade at the College to head Pace University in New York City. His legacy reflects the complex reality of leading a small liberal arts institution for many years, with an early honeymoon period followed by ongoing internal conflict and record-breaking fundraising efforts.

Hired by the Board of Trustees in 2007 to succeed controversial President Nancy Dye, the College’s first and only woman president, Krislov inherited an administration rife with tension. In his early years, he navigated significant administrative turnover and a student body that had just overwhelmingly voted it had “no confidence” in Dye in a campus-wide referendum.

Perceived by many as extremely isolated in the latter part of her tenure, Dye was initially a hit on campus with students swooning over her fresh ideas and participation in campus events such as Drag Ball. Yet by harping on particulars and frustrating faculty on her way out, Dye exited on a sour note after 13 years at Oberlin.

“[Krislov] was kind of the anti-Nancy,” said Hispanic Studies Professor Sebastiaan Faber, who has worked at Oberlin since 1999. “Nancy Dye was very involved to the point of micromanaging sometimes. Krislov came in saying from the beginning that that was not his management style, he was much more of a delegator and that he saw himself as a president who appointed good and responsible people in key positions that he could trust, and then focus his time mostly on the external part of the job. … At the college level it felt like a welcome change from the previous administration.”

Lessons learned from Dye’s decline undoubtedly influenced Krislov’s approach to his presidency. By teaching a course each semester, indulging students with selfies and Instagram shoutouts, frequently attending campus events and hosting staples such as Coffee with Krislov, he prioritized making himself accessible to the student body in ways that are unprecedented for an Oberlin president.

“I know from my own personal experiences, and seen other leaders, that when times are tough and people are angry or upset, it’s very important not to retreat,” Krislov said. “There were times when things were very difficult, and I knew people were not happy and not happy with me, probably, because of that. And I just said, ‘I need to get out there. I need to walk the campus. I need to be available.’”

Public perception of Krislov both on and off campus has certainly evolved over the years with internal issues gaining traction in the national media and often plaguing the institution’s reputation. Starting with the March 4 incident in 2013, in which a series of allegedly racist incidents and reported sighting of someone in Ku Klux Klan garb culminated in the cancellation of classes, a series of controversies have wracked campus.

“Oberlin can be a really tough place and people can get very upset, and I understand that,” Krislov said. “It’s not always easy, but I think the president needs to set the tone that — and I’m sure I wasn’t perfect in this regard — ‘I’m here for you, and even if you are not very happy with me, I want to be connected.’ Sometimes that was not as fun, but I think that’s important to do.”

More recent disputes include the defacing of the Black student union ABUSUA’s demands in December 2015, alleged cultural appropriation of dishes in the dining halls, the termination of former Professor of Rhetoric and Composition of Joy Karega and protests at Gibson’s bakery after an alleged racially charged altercation occurred between students and a store employee, sparking protests.

“When problems have come up, and there’s been a number of problems that reached the campus-wide level of the president, [Krislov’s] a pretty calm, level-headed person,” Mathematics professor and former dean of the College of Arts and Sciences Jeff Witmer said. “He cares a lot about what’s going on and how to do things. That’s both good and bad. The good is having calm leadership that looks at the long view, and the bad part is that there were times when the campus wants a response by 5 o’clock today, and Marvin doesn’t do that. … And that can be frustrating to the campus.”

College sophomore Kameron Dunbar, who worked closely with Krislov in his capacity as a student senator and in class, echoed Witmer’s sentiments about the president’s governing style being simultaneously level-headed yet infuriating at times.

“[Krislov] was very non-confrontational, at least in face-to-face interaction, which I found frustrating at times,” Dunbar wrote in an email to the Review. “Conflict isn’t usually fun, but it often comes with progress. I also thought he was rather humble, choosing to humble himself in the face of others even with the pomp and circumstance of being a college president.”

Dunbar’s comments on Krislov’s professorship also indicate how his administrative and teaching style could deeply differentiate.

“He was honest, charming and really pushed us to be our best selves,” Dunbar added. “I wish more people could have experienced that side of him.”

Aside from political conflicts on campus, the College has struggled with serious financial issues over the last decade. Outgoing Vice President of Finance and Administration Mike Frandsen has repeatedly called Oberlin’s current model unsustainable and costs have increased faster than revenue, leading to budget cuts and rising tuition. While the College is far from unique in having experienced significant tuition increases in recent years, the total cost of attendance has risen during Krislov’s tenure from $47,370 in 2007–2008 to $69,372 next academic year.

With the changing landscape of higher education, however, the role of a college president has been increasingly geared toward fundraising — an area in which Krislov has found much success. His fundraising proved vital after the 2008 stock market crash when the College’s endowment fell by more than $260 million between 2007 and 2009. The endowment has only recently recovered from the crash, sitting at $744.4 million in 2008 and $753.5 million in June 2016. The Oberlin Illuminate fundraising campaign, which began in 2009 and concluded last summer, ultimately raised almost $318 million and became the most successful campaign in College history.

In light of ups and downs over the course of his Oberlin career, Krislov lists three milestones, including the Illuminate campaign’s success, as his proudest accomplishments here.

The others are the completion of the College’s Strategic Plan and the construction of the Peter B. Lewis Gateway Center, one of several capital planning projects spearheaded by Krislov’s administration. The last decade also saw plans move forward to expand Philips gym and add an adaptable theater to Hall Annex, along with the completed construction of the Austin E. Knowlton Athletics Complex.

A significant amount of a recent $41-million loan, given to Oberlin by the Ohio Higher Educational Facility Commission, will go toward the Philips expansion, the renovation of Carr Pool, the Hall addition and other construction on campus. These projects have provoked mixed reactions, with some feeling that much of the construction has unnecessarily run the College into more debt and others calling the upgrades long overdue. Still, the buildings remain a notable and lasting aspect of Krislov’s legacy.

On a personal level, many cite Krislov’s passion for higher education and quirky sense of humor as definitive features of his personality. Chief of Staff Ferdinand Protzman, OC ’75, calls him “one of the best bosses [he’s] ever worked for” and “very empowering.”

“He is a boy scout,” Protzman added. “He doesn’t smoke. He doesn’t drink. His mind is always going. He likes to be active and go do things.”

When asked what he will miss most about both working at and living in Oberlin, Krislov’s response underscored his efforts to involve himself in all corners of the community.

“I love the quality of life here,” he said. “I love being able to bike to work, to go to five events in two hours. I can go drop by a dinner, go to an athletics event, go to an arts event, go to a reception, and it’s all good. But fundamentally, it’s the people. I love the students. I love the faculty and the staff, and just the dedication and devotion in the sense that we really are a community — sometimes not always in agreement with each other, but we are a community.