The Oberlin Review • May 5, 2017 • https://oberlinreview.org/13753/news/parents-question-school-boards-expenses/ 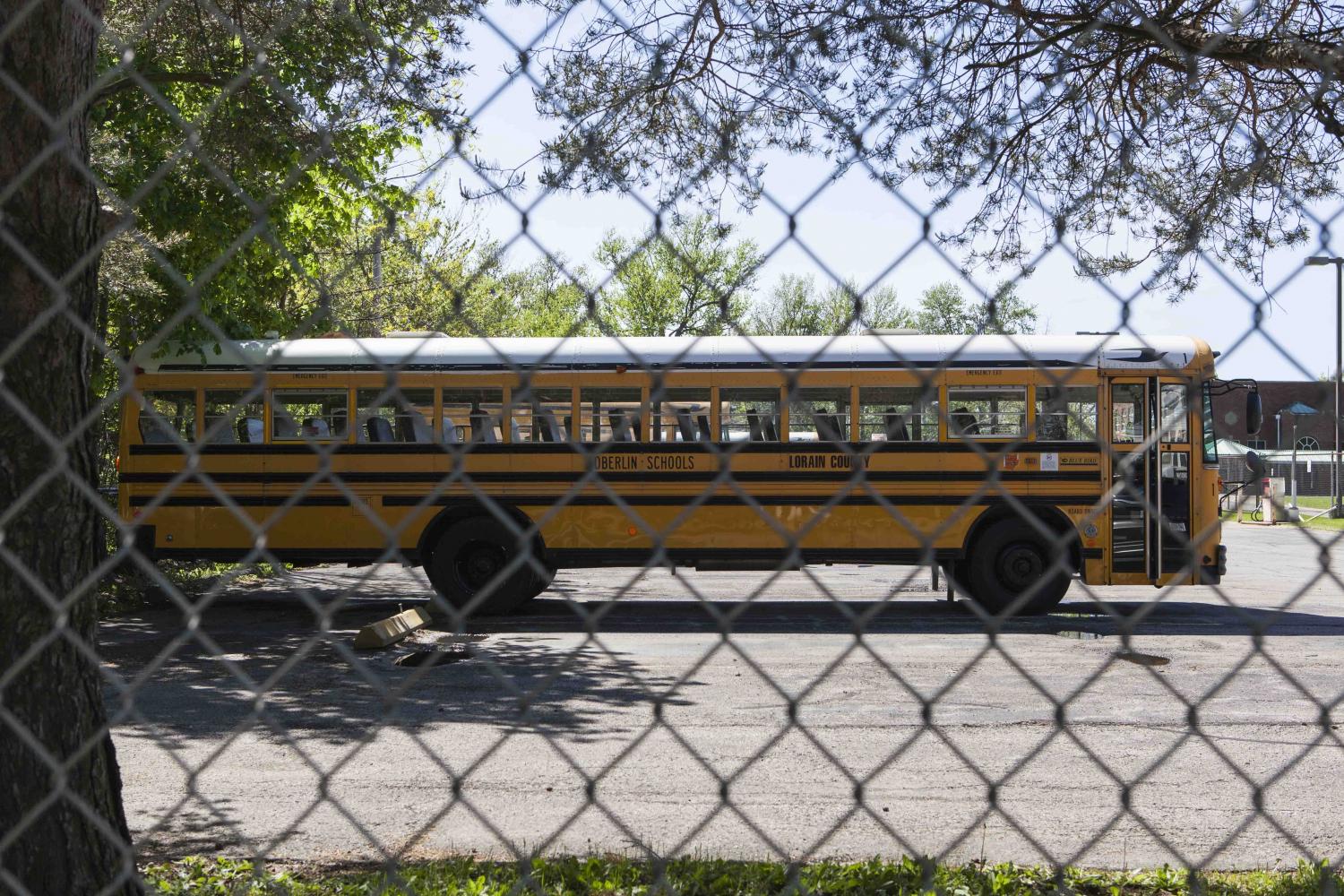 A bus parked outside of Langston Middle School. Local school parents accused the Oberlin School Board of spending an estimated excess of $1 million on school bus repairs over the past 10 years.

The Oberlin City School Board will launch an investigation into potentially inflated school bus repair costs after local parents accused the board of spending an estimated excess of $1 million over the past 10 years. The revelation comes after the board’s February decision to end bussing to Lake Ridge Academy, a private school located in North Ridgeville, Ohio, about 30 miles from Oberlin.

The decision was based on the board’s claim that they would save $30,000 a year with the cut — a claim many parents disputed, saying that there were more exorbitant costs in other parts of the budget that needed further examining.

Jessa New, OC ’01 — who has children both at Lake Ridge and in the Oberlin public school system — and other parents pinpointed maintenance costs as a potential source of excess spending.

The ongoing conflict arose during an Oberlin Board of Education meeting on April 25, bringing local mechanic Matt Tipple, who services the city’s buses, and his company, Countryview Services in Wakeman, Ohio, also known as Countryview Farms, into the line of fire.

Tipple said he has serviced Oberlin’s school buses since 2005, when none of the buses met the state’s safety requirements, bringing the dilapidated buses up to code.

“There’s a few elements on busing that got misconstrued badly, to be honest with you,” Tipple said. “When I started doing the buses for the school they were in such disrepair they couldn’t pass an annual inspection at all for the State Highway Patrol. It wasn’t even close, they weren’t going to pass. And I was hired … to bring the fleet up to speed, to keep them on the road. We had to do all of that within about three weeks’ time.”

At the April meeting, New presented data she had collected from the Ohio Board of Education stating that Oberlin spent $145,976 in the 2015–2016 school year — almost $19,000 per bus. This figure more than triples the $3,000–$5,000 cost per bus that Wellington and other neighboring schools spend per year.

“What really bothered a lot of us is that there were never any questions asked,” New said. “It’s not necessarily [Tipple] or his business that I’m upset with, its more the process that the school district has gone through every year — which is no process. When you’re using public money, you want to make sure you are getting what you’re paying for.”

Tipple said the high costs are a result of constant use and tough Oberlin winters, adding that many of the buses are on the roads all week and that the winter salt creates rust and destroys the exteriors and undersides of buses, particularly with the older models.

Tipple also said that the comparison to Wellington is unfair, considering the advanced maintenance Oberlin’s buses require, with some being nearly 17 years old. He says the costs included in the data are far more general than the ones used in other school districts, and that they encompass services that might be found in other categories in different schools’ budgets.

“We do everything,” Tipple said. “We help inspect the buses, clean the interiors, fix the seats, paint some stuff. … We do everything but put fuel in them and put the driver in them. It’s a really unfair comparison to compare [Wellington’s] numbers because one is everything and one is partial.”

The Ohio School Board Association says that as buses age, maintenance costs may begin approaching $5,000–6,000. New also used information from School Transportation News and SchoolBusFeet.com to raise questions about the high maintenance costs.

“As a rule of thumb, you should place $1,800–$2,000 per bus in a parts budget line,” said Michael Dallessandro, Veteran Transportation director in New York, in an October 2015 posting on SchoolBusFeet.com. “Your newer vehicles that are under warranty should consume very little of those funds, while your oldest units will consume more than their share. In most cases, this equals out.”

Tipple said that this is a “no-win situation” for the schools, citing intense media backlash the board received when they bought a new bus in 2005 and the current unhappiness with the repair costs. A new bus typically costs around $80,000, according to The Chronicle-Telegram.

The board has since halted the rest of its agenda items until an investigation could ensue, which involves inquiries into the possible purchase of up to three new school buses and an $11,000 invoice for Tipple regarding engine repairs.

The board will also accept bus-maintenance bids for the coming school year.

“People need to ask questions,” New said. “I think it’s important that it doesn’t just stop with bus maintenance. They should look at all of their large numbers and see ‘are we spending this money in the best way we can?’”

Tipple also defended his business in light of the busing controversy, stating that this is the first time people questioned its credibility.

“People are saying I’m lying about my company,” Tipple said. “We’ve never been in this position. Nobody’s ever said anything bad about us like this. It’s completely unnecessary because I have no opinion whether kids should be bused to Lake Ridge; it doesn’t affect me at all. … The bottom line is I got thrown into a firestorm when I was just hired to do a job.”