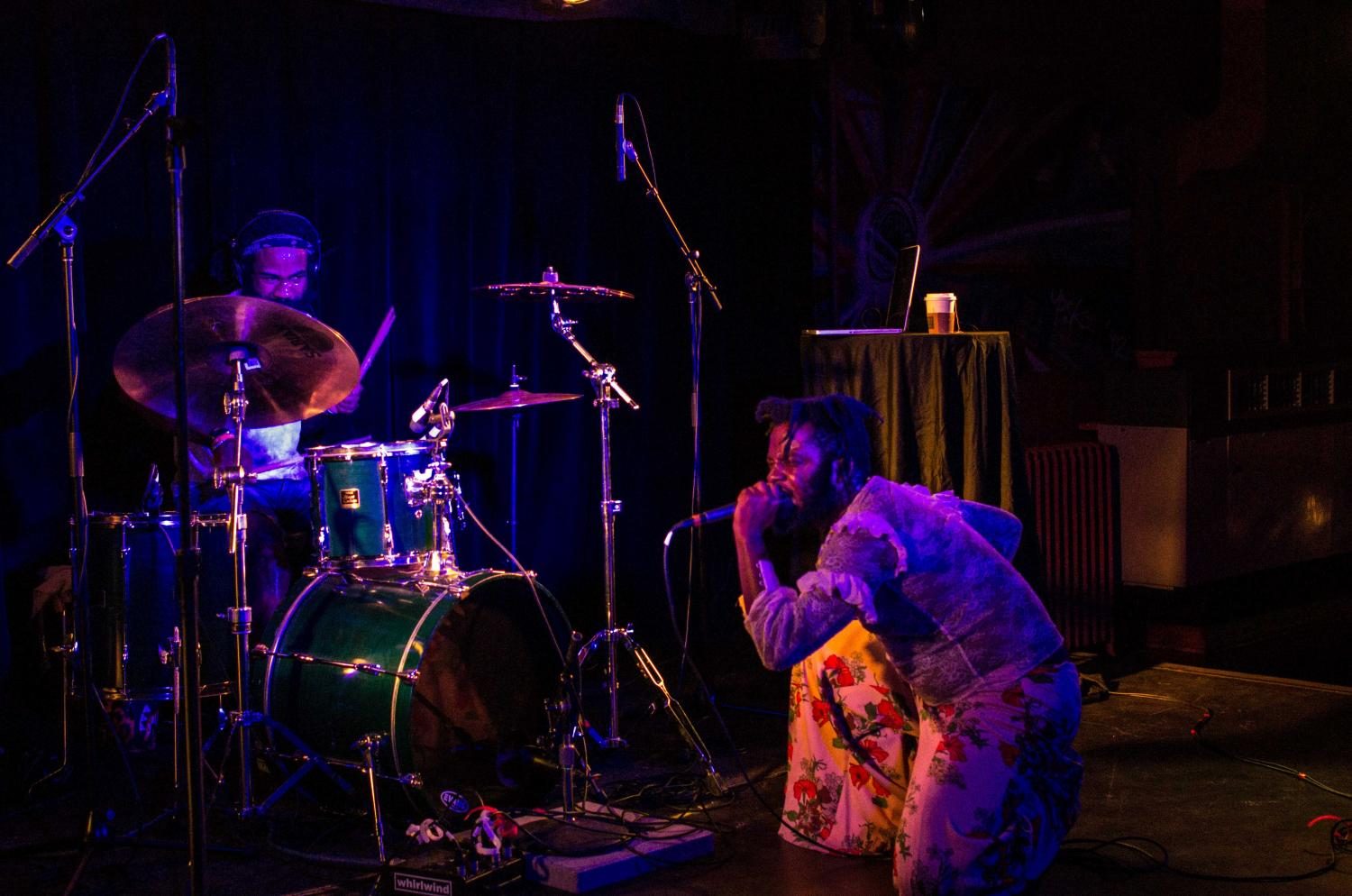 Abdu Ali played the first ’Sco show of the semester on last Saturday, energizing the crowd with original style and call-and-response performance.

Newly arrived students were in for a treat when the ’Sco opened with an exceptionally strong orientation show Satuday night. Baltimore emcee, poet, rapper, and activist Abdu Ali and his crew brought a mix of highly energetic Afro Rave songs that left the audience physically shaken by the performance’s sheer volume. For the first-years who formed their first impressions of the ’Sco that night, the standard for future performances will be set unusually high, while for returning students, this concert heralded an excellent beginning to the new school year.

Even before the ’Sco had opened for the night, the crowds gathering in Wilder Hall’s basement had already lined up halfway to the mailroom. Most of these people departed after receiving a bracelet for entry and returned later that night once the performance had begun. Nevertheless, a sizable number of students waited in the ’Sco for Ali’s arrival. He came through the crowd unnoticed until suddenly, with a rhythm bursting out from the drumset on stage, he called out, “Oberlin, what’s good?” He was greeted by cheers from around the room.

Ali and his crew’s music defied any standard sort of classification. It shared many characteristics of rap, hip-hop, and, at times, even a touch of soul. But at the same time, it could not be reduced to a specific formula of any kind. As a Black, queer, genre-bending artist, Ali describes himself as “cosmic,” “post-apocalyptic,” and “life-affirming,” and his performance at the ’Sco delivered all that and more. He has truly created a voice of his own, unlike anything else that can be found in the mainstream today. His most recent album, Mongo, which debuted in 2016, was described by The Fader as “a pitch-perfect black self-care mixtape,” full of references to Nina Simone, Alice Coltrane, and other Black artists past and present.

The performance reached its peak about halfway through the evening, when the people who had left after receiving their entry bracelets began to trickle back in. The crowd’s excitement fueled Ali’s energy, and he fueled their excitement in turn. As the room became increasingly crowded, various circles of friends that were scattered throughout the room soon merged into a single mass. It was at this point that I realized that Ali’s performance was dependent upon the audience as much as it was upon Ali himself. Ultimately, it was this relationship, more than anything else, which made Ali’s performance worth remembering.

What binds Ali’s songs into a singular, cohesive style is the energy that he and his crew bring to them. Throughout the group’s set, there wasn’t a moment when Ali was onstage without his full enthusiasm. He danced with a beaming grin, hopping around and swinging his arms in sharp, fast movements.

Naturally, Ali’s songs reflected his energy, as he used purposeful repetitiveness and a call-and-response style to rally the whole room. Occasionally, he even paused to check in with the crowd, asking, “How are you doing?” only to be answered with cheers. While it was often a bit of a challenge to make out specific lyrics from the songs, there was a heavy beat and rhythm that saturated the music with so much power that everybody present could literally feel the vibration in their bones. But it was the passion of the music, not its specific lyricism that mattered most for this performance. It’s fitting that Ali describes his artistic goal as “delivering a message so people can feel motivated, alive, and awake.”

The high level of enthusiasm that Ali brought to this performance is especially important at the start of the new school year. After a summer spent at internships, extra classes, or in simple relaxation, it can be difficult to find the energy to adjust to the rigor that a new school year brings. But if anyone is looking for some new music to rile themselves up for the first few weeks of classes, Abdu Ali might just be exactly what they need.