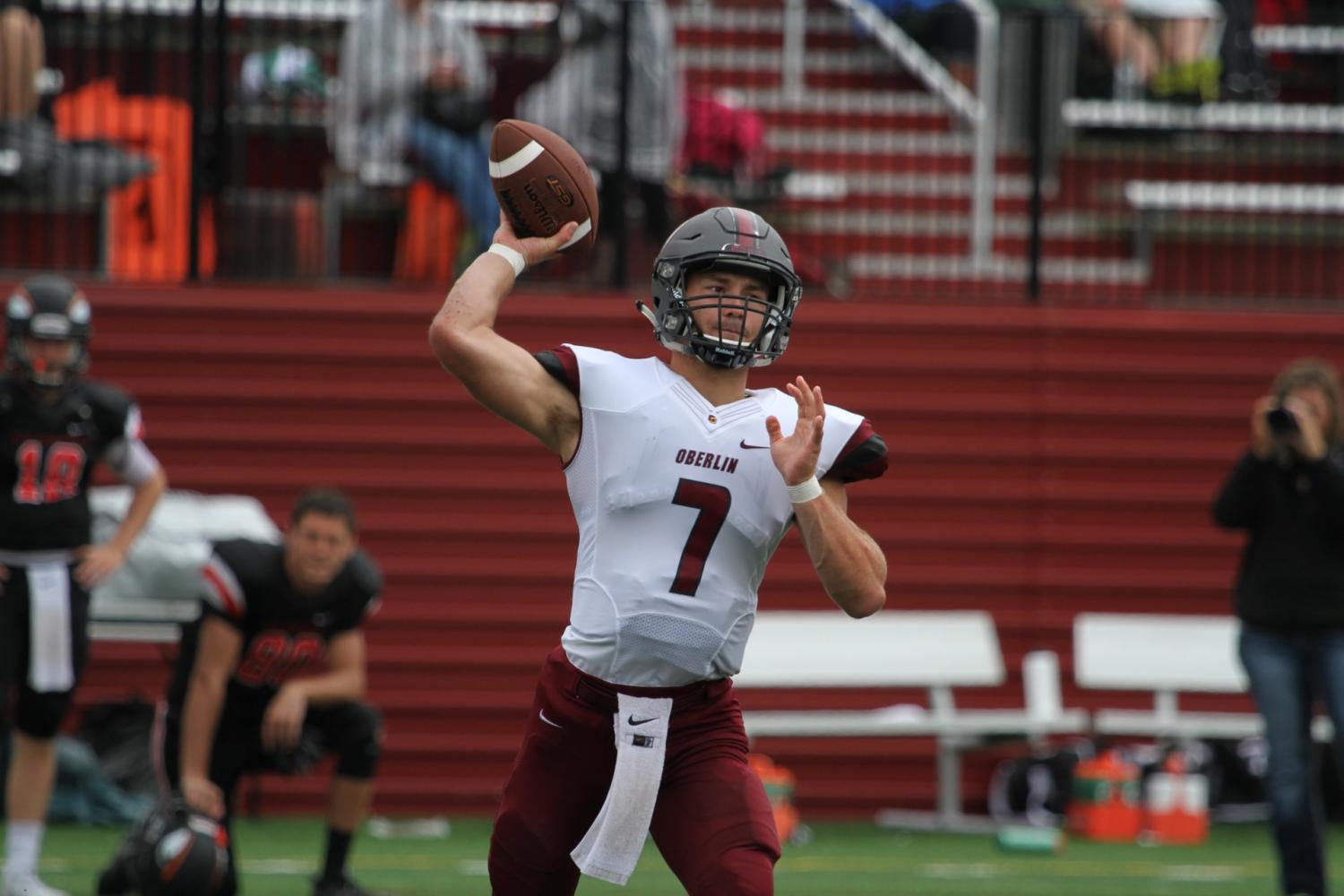 Sophomore quarterback Zach Taylor threads the needle through the Kenyon College secondary in the Yeomen’s 31–10 dismantling of the Lords. The football team is 2–0 for the first time since 1989.

The Yeomen followed up a strong start to the season with a dominating 31–10 victory in their homecoming game against the Kenyon College Lords. Oberlin now commands their first 2–0 start since 1989 following the defeat of their rivals. While their previous 24–6 win over the Kalamazoo College Hornets broke their 13-game losing streak that spanned over two seasons, this win solidly indicates a transformed Yeomen team.

“We had a mission at the beginning of the season,” new offensive coordinator and quarterback coach Robbie Matey wrote in an email to the Review. “Take everything one week, one day, one rep at a time.”

The Yeomen’s 21-point win on Saturday was fueled not by a few big plays, but by pressure and consistency from the first minute to the last. The Yeomen struck first with a 31-yard field goal 5:49 left in the first quarter, but a 16-yard pass from Kenyon’s quarterback, Ian Bell, in the second quarter gave the Lords their only lead of the game at 7–3. Sophomore quarterback Zach Taylor was quick to respond, however, as he gunned a 23-yard pass into the ready hands of senior wide receiver Corey Fussinger in the end zone just five minutes later with 1:59 remaining in the half.

The Yeomen extended their lead to 17–7 in the third quarter with another pass from Taylor, but it was the fourth quarter when the team excelled, scoring two more touchdowns. The first came on the ground, as Taylor ran it in from two yards out. Oberlin coaches utilized Taylor’s rushing abilities last season as well, as he finished second in the North Coast Athletic Conference with 166 rushing attempts in the 2016 season.

On the opposite side of the ball, senior defensive lineman Luis Solorzano led the way with six tackles, two sacks, and a forced fumble as the Yeomen held the Lords to just three points in the second half. His efforts earned him the title of NCAC Defensive Player of the Week, but he remained humble in his success.

“It really brightened my day, but I’d like to give a shout out to the defensive line,” Solorzano said. “It’s the whole defense. We work together; it’s not about just one player.”

“After last season, we really wanted to change the culture and make sure we came back with a vengeance,” Solorzano said.

The offense’s efforts against the Hornets were equally fruitful. Two touchdowns in the first half sparked the Yeomen’s attack. The first was a 53-yard run from senior running back Khalil Rivers, and the second came through the air as Taylor launched a 23-yard pass into the hands of junior wide receiver Robby Reinheimer. Morale persisted well into the second half, leading to another two touchdowns, both off of passes by Taylor. The Yeomen celebrated their first win with a 24–6 final score.

Taylor, who values his faith just as much as he does his teammates, maintains that the Yeomen’s early season success is the culmination of team efforts.

“I honestly just feel blessed,” the Artesia, CA native wrote in an email to the Review. “None of this would have been possible without God and the commitment of my teammates.”

The Yeomen will now prepare for their first true test of the season when they face off against the number 15 ranked Wittenberg University Tigers tomorrow in Springfield, Ohio.